Journalistic decorum demands that I first and foremost disclose that the subject of today’s Girl School is not only a very talented musician and dynamic and interesting human being, but she is also my housemate who often watches my dogs and most of the time does her dishes in a timely manner. Now that we have the niceties out of the way, allow me to unceremoniously gush about one of my most favorite human beings. Hether Fortune is a lot of things: Fiercely honest writer, devoted spiritualist, doting cat mother, excellent friend, avid arcade goer—but first and foremost, she is a musician. Fortune formed her band Wax Idols as a vehicle for her own songwriting after years of touring the country with various bands in 2010, including Hunx And His Punx and Bare Wires, but it soon became much more than just a band; Wax Idols took on life as the living, breathing expression of Fortune’s creativity, not only sonic but also visual and theoretical. Since then, Wax Idols has released two 7″s, one cassette EP, and two full-length albums, each increasingly sleeker and more nuanced than the last. What started out as a post-punk, garage-goth situation has over time slowly evolved into something darker, deeper, and more atmospheric. Part of it probably has to do with maturing, but part of it also has to do with Fortune constantly refining not only her musical skill set but also her sphere of influence.

For the third record, due out October 16th on Collect Records—the label started by Thursday’s Geoff Rickly—Wax Idols’ sound has retained that deep, dark, intensity but also taken on a very distinctive pop sensibility, and the result is a perfect sad-dance record in the vein of The Cure or Cocteau Twins. The sort of but sort of not a break-up record is full of songs that are heartbreaking and intensely vulnerable while also triumphant and proud. I’ve heard the whole thing—for months, through the walls mostly—and I can say with confidence that is Fortune’s best work yet, besides maybe her high score on Dance Dance Revolution.

(Hether if you are reading this just because I said nice things about you doesn’t mean the hallway is going Swiffer itself). 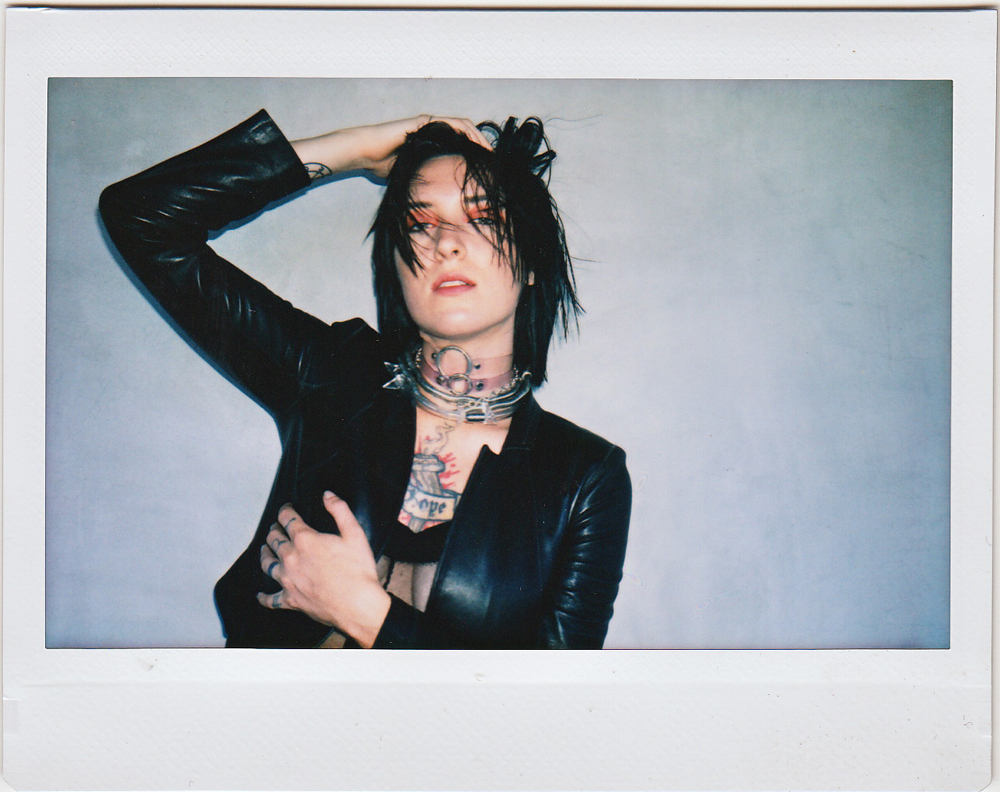 YASI SALEK: What was the first song that stopped young Hether in her tracks and made her think, I have to play music?
HETHER FORTUNE: When I was like 13, I hijacked a bunch of CDs from my stepdad. One of them was a compilation from Woodstock ’69 and when I heard Jimi Hendrix doing “The Star Spangled Banner” for the first time, my mind was completely blown. I can still remember sitting there in my bedroom, staring out the window with my little boom box blasting, being completely amazed and freaked out by what I was hearing. He made a guitar sound like bombs dropping. Before hearing that I had no real concept of how limitless the possibilities are with sound and how truly expressive music could be. It changed my life.

You play what, five instruments? Did you learn them all on your own?
The instruments I can play well are guitar, drums, bass, keyboard/piano. I can half-assedly play a bunch of other instruments too, but I wouldn’t brag about my skill level or anything. I can coax decent sounding moments out of most wind instruments, mandolin, violin/fiddle, banjo, accordion… a lot of stuff. I used to work at The Old Town School of Folk Music in Chicago so I picked up a lot of knowledge and tips from other musicians that worked there. The only instrument I ever took a real lesson for was the violin.

“AS LOFTY AS IT MAY SOUND, PLAYING LIVE MUSIC IS THE PUREST FORM OF TRANSCENDENCE THAT I’VE EXPERIENCED.”

I’ve learned how to play everything else by ear and by paying attention to others. I don’t read music. There are a few musicians in my family that I’ve learned a lot from over the years too. One of my cousins is a freelance composer named Keith Horn who is a multi-instrumental actual genius. I was totally obsessed with him when I was a kid because he was cool, older than me and was constantly playing music at family functions. He taught me some formative things about piano and guitar. My uncle, Ryan Fedewa, has been a professional musician his entire adult life. He played drums in grunge and heavy metal bands when I was little and he gave me my first drum set. He works at a music store in Michigan and still writes, produces and performs music constantly. Another cousin of mine named Jeff Gensturblum used to be the drummer in a band called Small Brown Bike and the first song I learned to play on drums was one of theirs.

Why do you prefer a 12-string guitar?
I don’t prefer it for every reason in every situation, but in general it just has a lot more textural and tonal possibilities than a regular 6-string. If I’m playing a solo show or in my room writing, working with a 12-string just makes me feel more secure. I can fill a room with layered, beautiful sound using just one instrument.

It must be frustrating as a musician to create such a specific sound and then read journalists describing it in a completely inaccurate way. What are the most common baffling ways journalists describe your music, and how would you actually describe the sound of this new album?
[Laughs] If you had asked me this question a few years ago, I would have a much sassier response for you. These days, I don’t really care how anyone wants to describe my music or what they compare it to, so long as they take the time to listen to it. Everyone is entitled to their own interpretation. And also, I don’t really feel like I’ve honed a super specific sound that can only be classified as one easily definable thing. There are a lot of different influences that filter into the music I make, including the influence of other players that have come and gone throughout the band’s history thus far. Things are always changing. I’m always changing.

I do really enjoy creating absurd genre names though. I called our last album “Morbid Classics” and I’ve been referring to the new one as “Bitch Pop” [laughs]. Actually I’m not sure if I came up with that or if it was Tamaryn. It’s something that was thought of in conversation with her, either way. Another friend of mine called it “Soul Goth.”

You’re as much a performer as you are a musician. Was it hard to become comfortable with a big stage persona? What do you love most about performing?
To be completely honest, I’ve always been a showoff. I love performing. I used to perform for my mom and her friends when I was little. I was even a cheerleader for a few years before I went into full-on rebellion mode. My mom had me in dance classes when I was really young as well. I went through a bit of a shy stage when I was a teenager because I didn’t feel attractive and wanted to disappear, so my ambition with music shifted at that point towards being a more behind the scenes person. I spent the next few years studying audio engineering and interning at recording studios. But then my confidence returned and I started writing songs again and playing shows.

I get nervous before shows but it’s part of the rush. When I’m on stage, I’m in complete control of my world for however long I’m up there and yet simultaneously, I am letting go of everything. As lofty as it may sound, playing live music is the purest form of transcendence that I’ve experienced. It gets more enjoyable the more you do it, too. At least that’s my experience.

There are no time, space, or reality limitations: what does your dream Wax Idols tour look like?
Oh man. I would go to the utmost extreme if I had zero limitation—stadium ready space art installation extravaganza. We would play inside of a fucking enormous 3D glass cube that had an entire light/visual show programmed into it and it would detach from the stage and float around the audience or just leave if they weren’t being receptive enough. We’d fly off to a desert or something, play there instead and broadcast it live on the Internet. We would be on tour with David Bowie circa Low and he would either appear via wormhole for each show or just be projected as a hologram. Missy Elliot would be the MC and I would have a black diamond-encrusted suits made for the entire band.

This answer could go on forever. 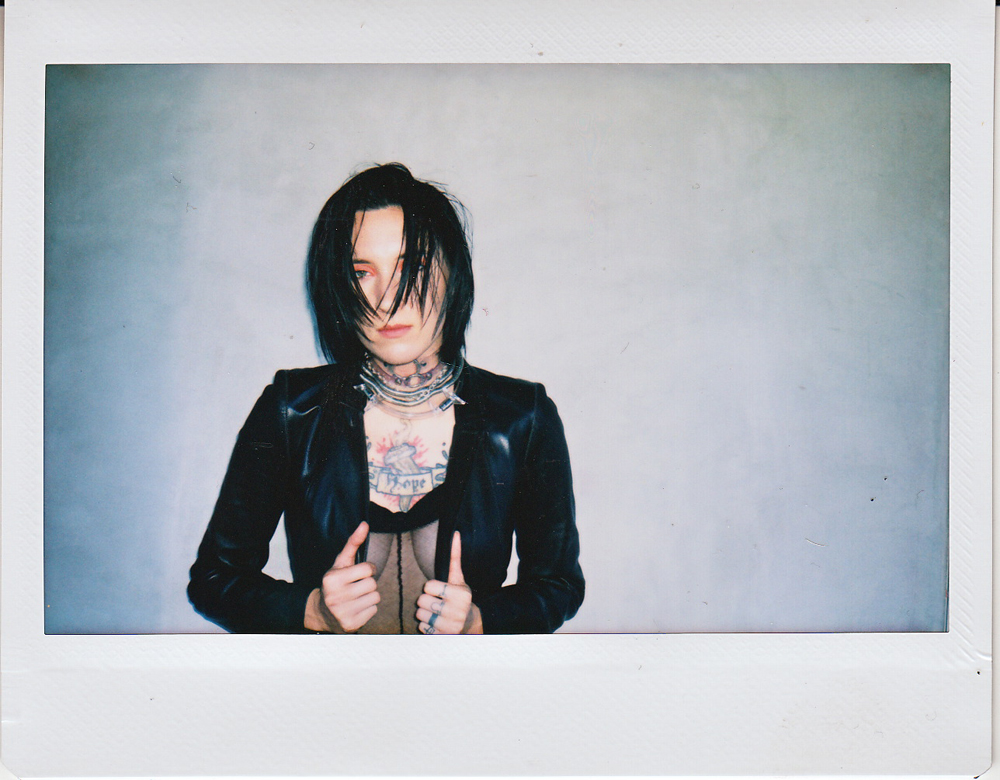 What would be the best place for you to walk into and hear your music playing?
This is a dream that has already actualized. I walked into a leather daddy bar during Folsom Street Fair in San Francisco 2 years ago and a Wax Idols song was playing. The place was slammed wall-to-wall with half-naked leather-loving queer folx partying super hard, making out and dancing. It doesn’t get any better than that.

I’ve been watching a lot of Ally McBeal lately—as I know you recently did—and on the show her therapist suggests she have a theme song. What is your theme song and can you also pick a theme song for me thanks?
“I Can’t Go For That (No Can Do)” by Hall & Oates. Yours is “Call Me Maybe” by Carly Rae Jepsen.

Why do you spend so much time at the arcade?
The better to win you prizes with, my dear. Yasi Salek
Find out how Rachael Anderson (aka Steak) got her nickname as she talks about balancing her two clothing brands, writing/blogging, and being a badass wife and mom in the process. Yasi Salek
Yasi Salek continues her weekly GIRL SCHOOL column interviewing one of our favorite grunge duos Slutever, for an entertaining/hilarious read that makes us all want to be best friends with them.