Flask Mob :: From the Bay to LA

After kicking off Flask Mob in San Francisco last November, excitement quickly spread down the coast. And with the huge response came requests to add cities, and Los Angeles was imminent. Being only a few months shy of Flask Mob’s 1st year anniversary our team felt “ready” to take on LA. But there was only one thing on our minds that made us nervous to pull the trigger; these two relatively close cities run their law enforcements completely different, or so we expected.

SFPD is used to large scale public events – protests, festivals, etc., so Flask Mob having hundreds of people deep walking, drinking, and being loud was almost unnoticed by law enforcement. So knocking on LA’s door with a group of your rowdiest 400 friends knowing LAPD’s rep didn’t seem to be the smartest idea. But we marched on. As we made our way to Pershing Square, we were overwhelmed by an immeasurable amount of people, we knew that LA had always wanted their own Flask Mob, but never did we expect this great of a turnout. The feeling was electric, the event we had worked so hard on for the last 9 months in San Francisco was being appreciated statewide. Still, the looming feeling of controlling the mob lingered. Armed with 6 team members, a bullhorn, and a handful of walkie-talkies, we took on the challenge that we set out to conquer. Shortly after leaving the square, we were quickly greeted by the boys in blue; and to our surprise, they were more interested in us than threatened by our massive size. Everyone who came out brought the heat, with our typical trappings – fireworks, steel wool, fire-breathers, and a shitload of booze. We met loads of talented minds and are excited to bring The Mob back to LA for a second meet. But for now, I guess we’ll all take a shot and cheers to Los Angeles, because LA… Your Flask Mob chapter is officially open.

I asked people to email me their photos to describe the night. 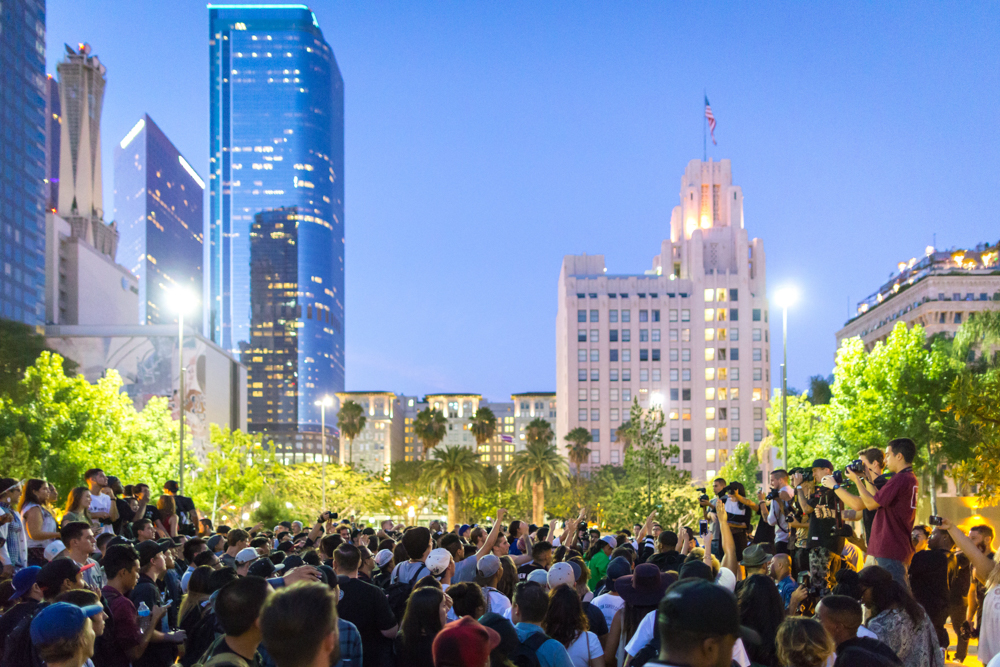 As the crowd gathers at Pershing Square for free shirts before we hit the streets. (Photo by @vzmaestro) 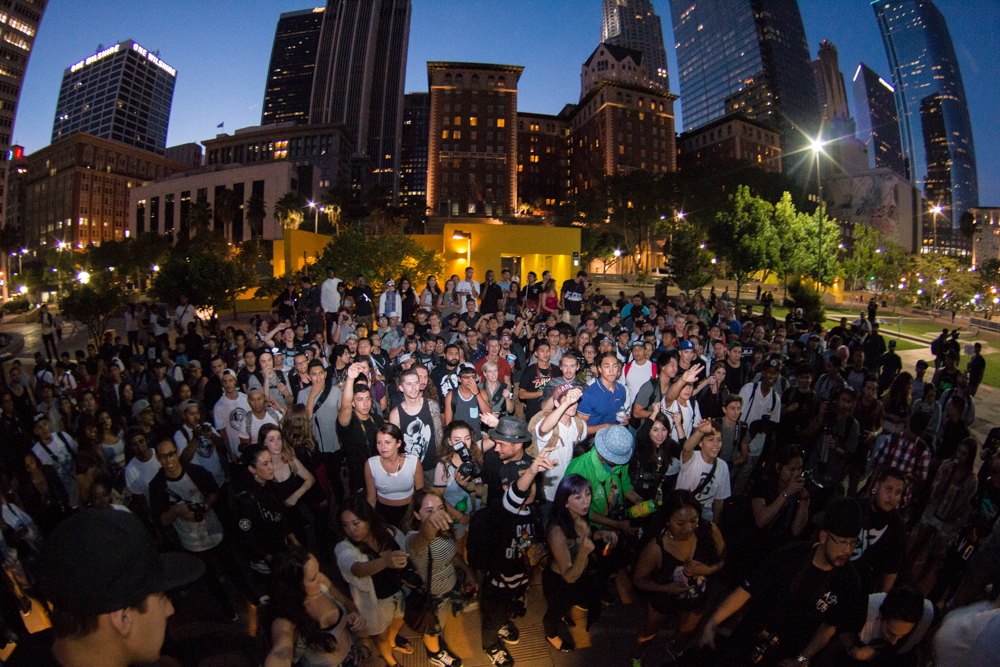 Too many people in the square at once, time to hit the streets. (Photo by @poeticsky) 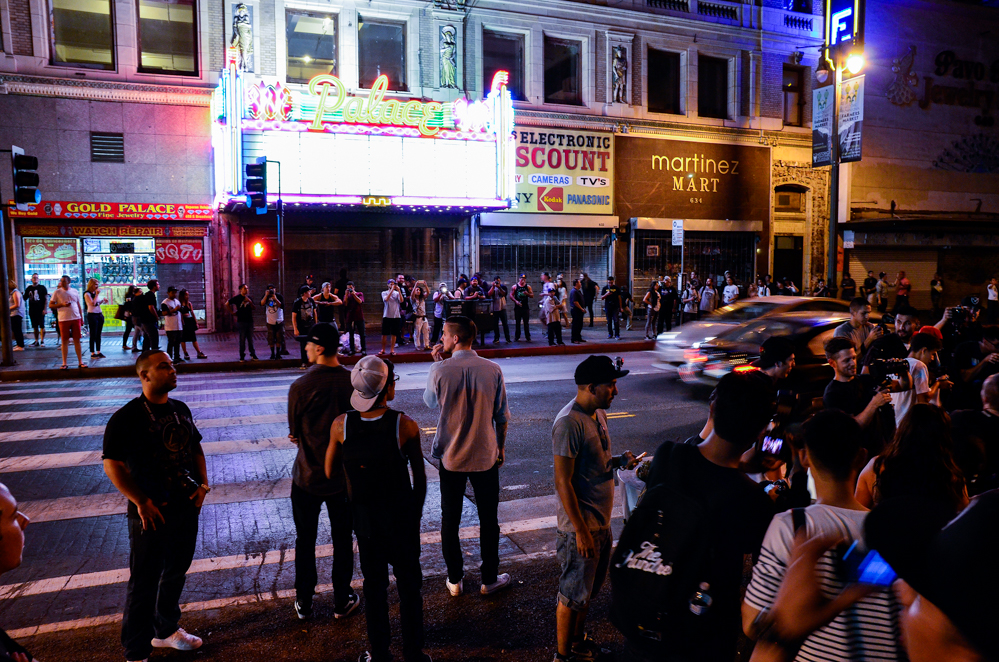 Broadway was packed on either side with buzzed photographers. (Photo by @rjquebral). 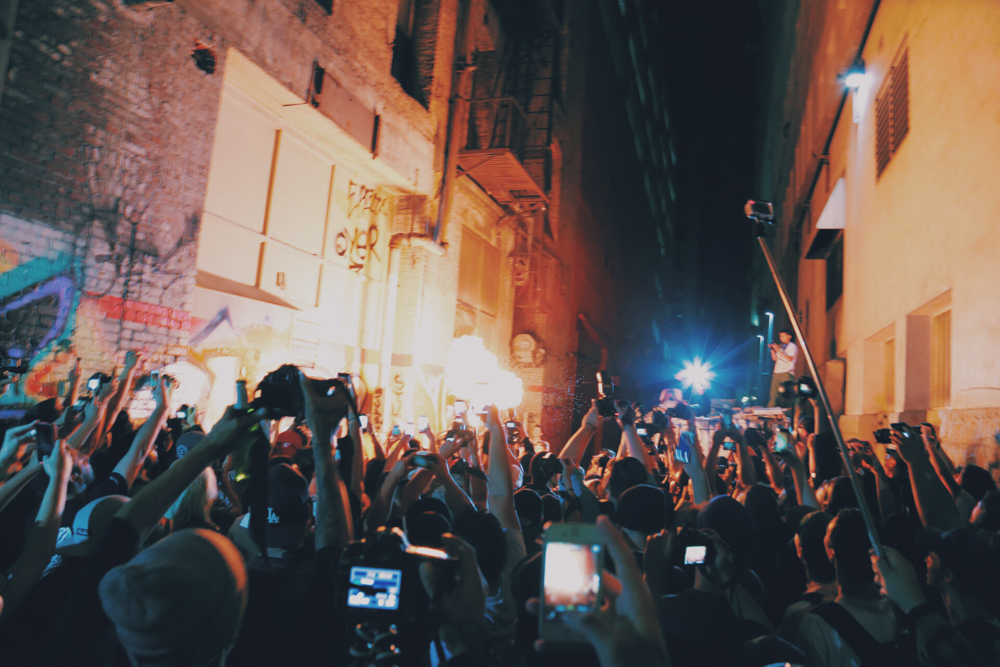 The first alley was too small for all of us to fit, but the second one left room for some heat. (Photo by @jcougar_wrla) 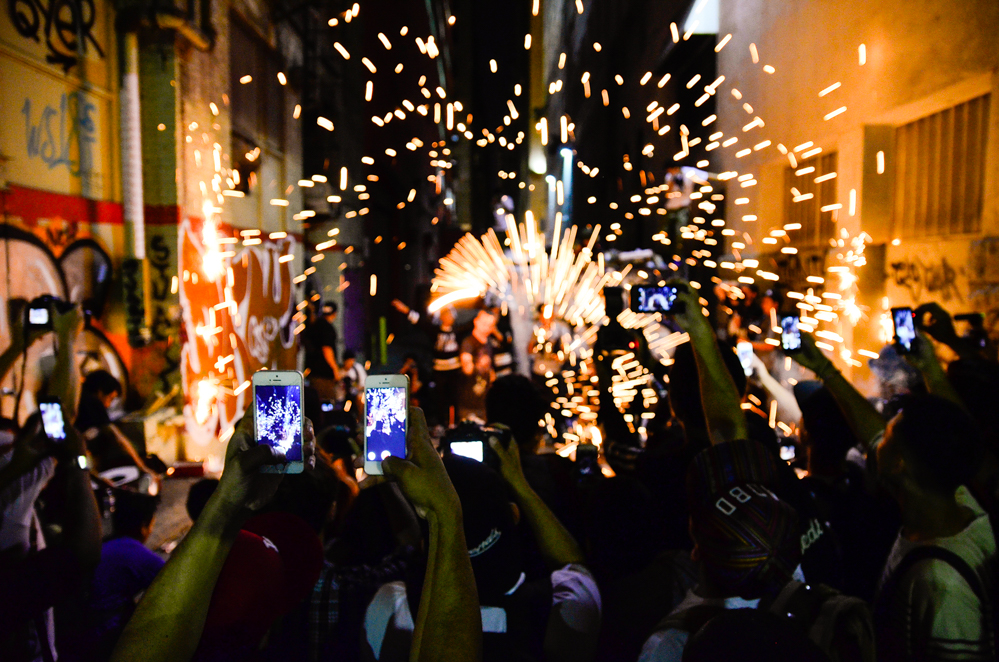 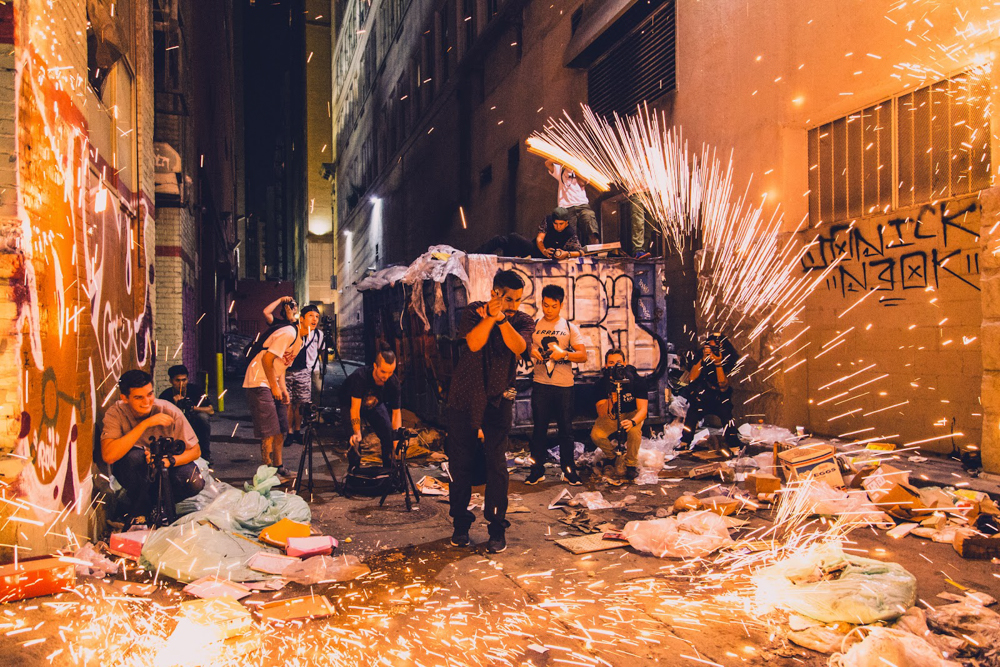 Steel wool is always cool to look at but it looks even better as a long exposure. (Photo by @tarren_it_up) 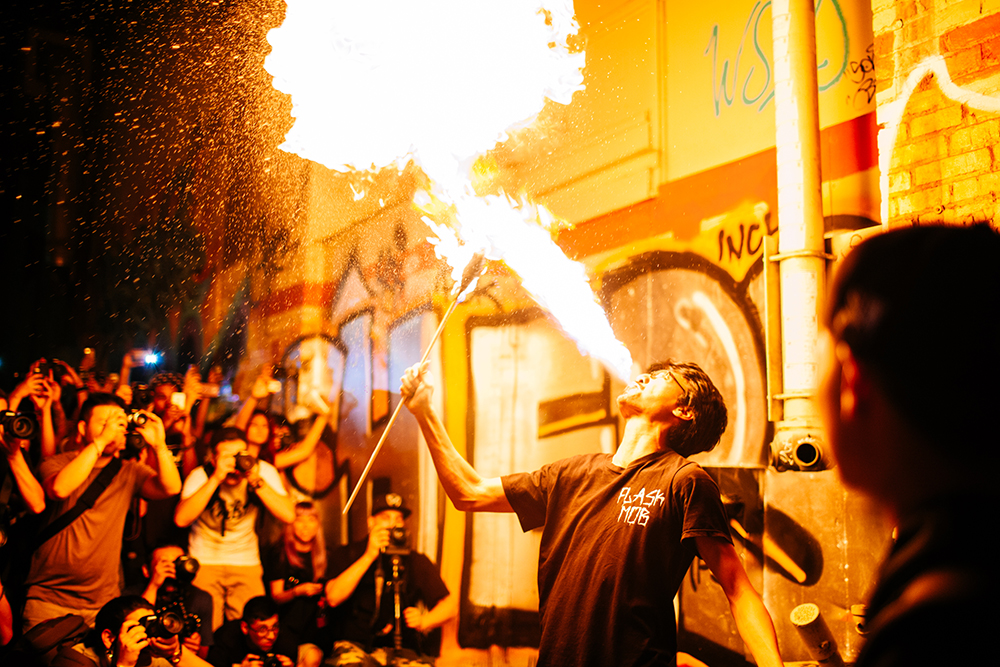 And then there’s our personal fire breather wearing our Flask Mob shirt from a few meets ago. (Photo by @scali) 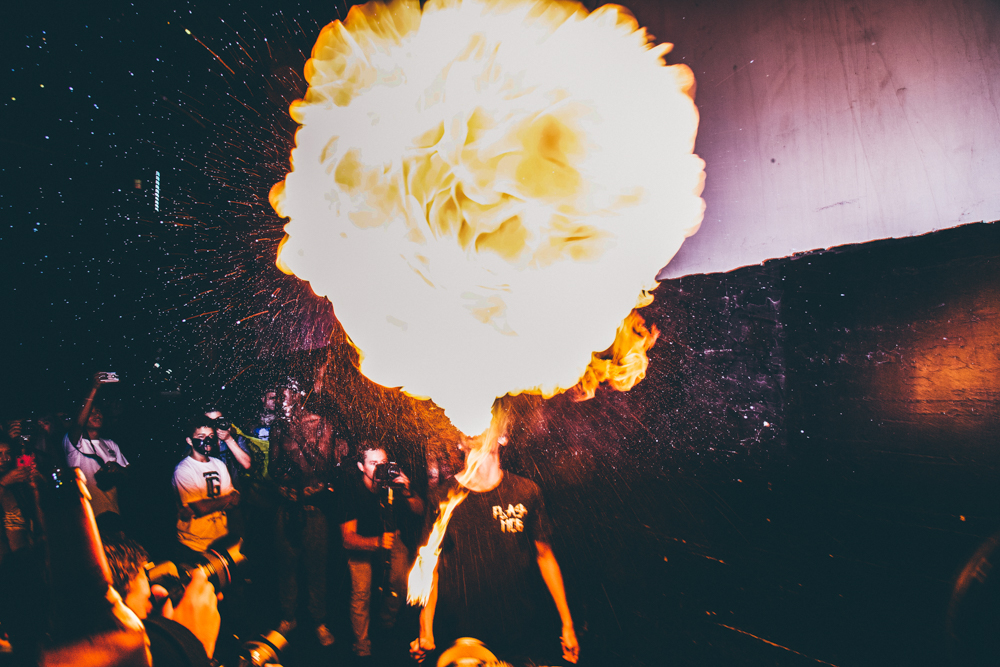 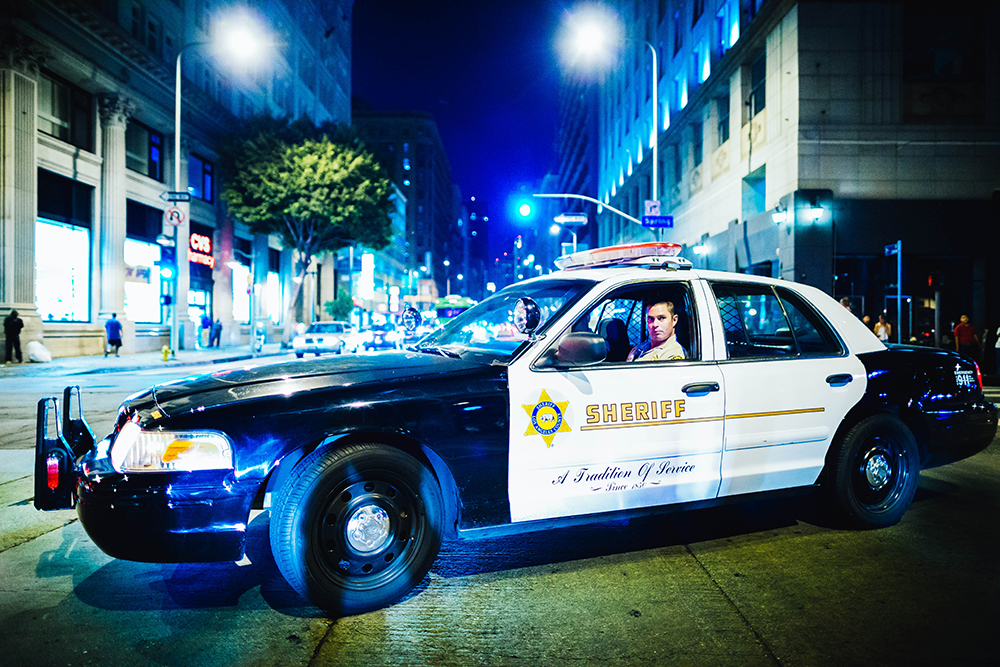 LAPD observing how many people he can’t control by himself, better call for back up homie. (Photo by @vzmaestro) 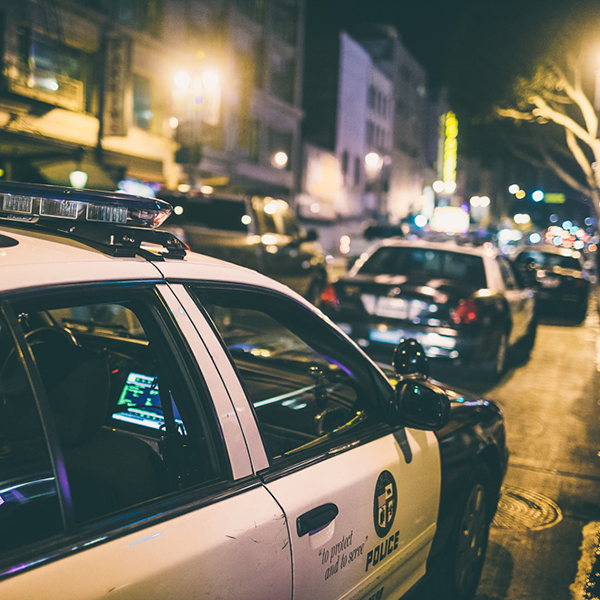 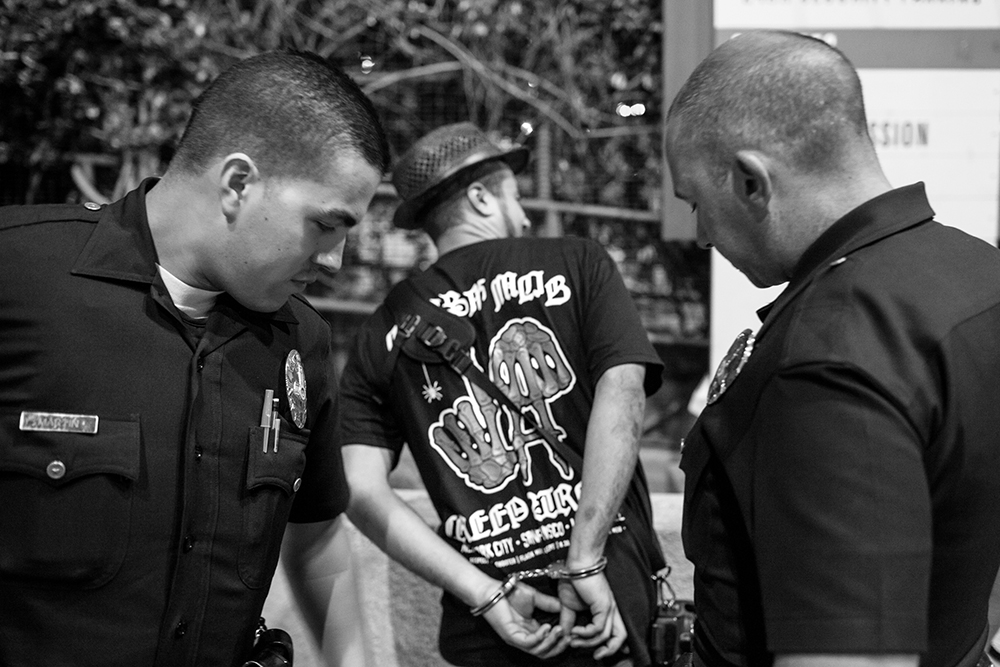 The back up arrived but probably realized it wasn’t fair to arrest just one person out of a whole mob. He was let go minutes after @scali snapped this photo. 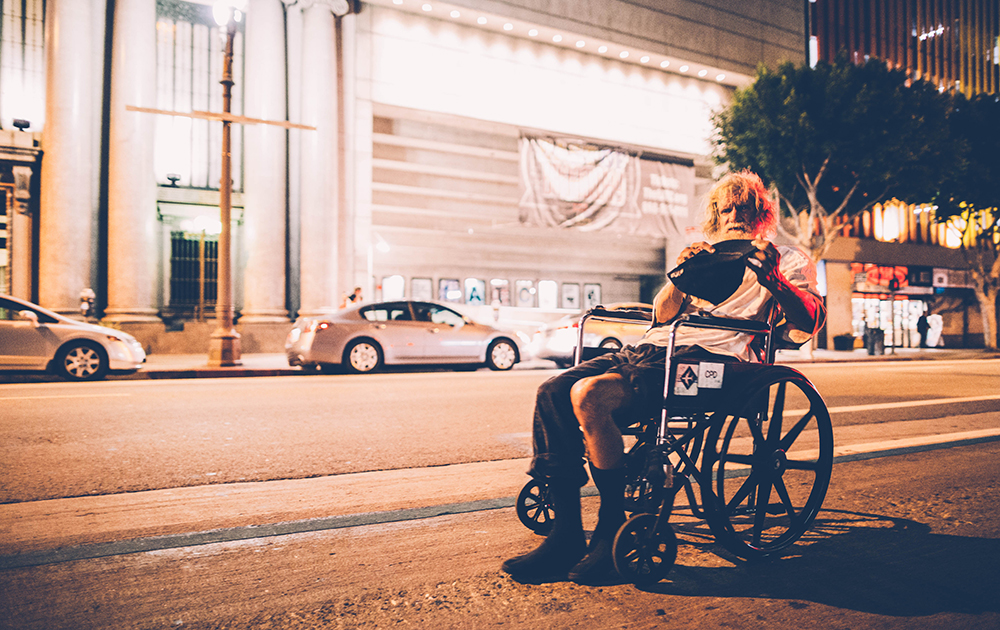 This guy tagged along all night and most likely had the best time he’s had since before he stole that wheelchair. (Photo by @vzmaestro) 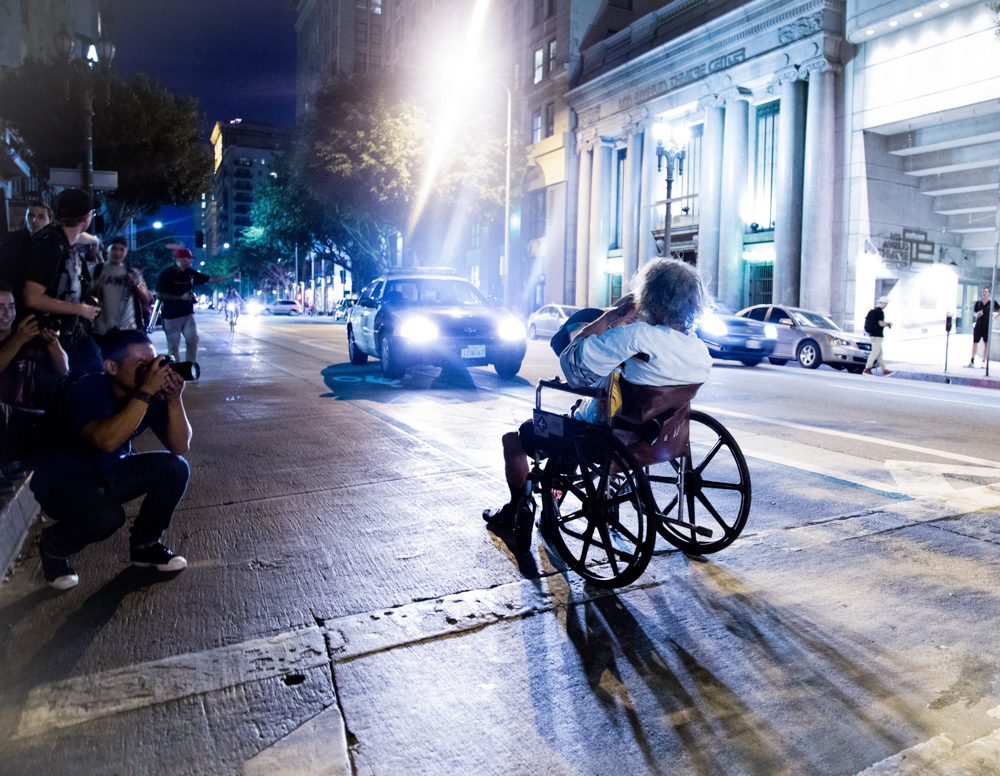 Free recycling for our finished drinks. (Photo by @poeticsky) 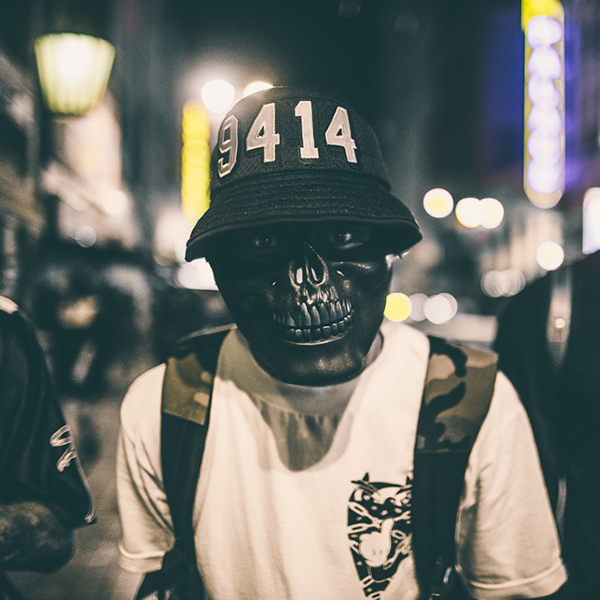 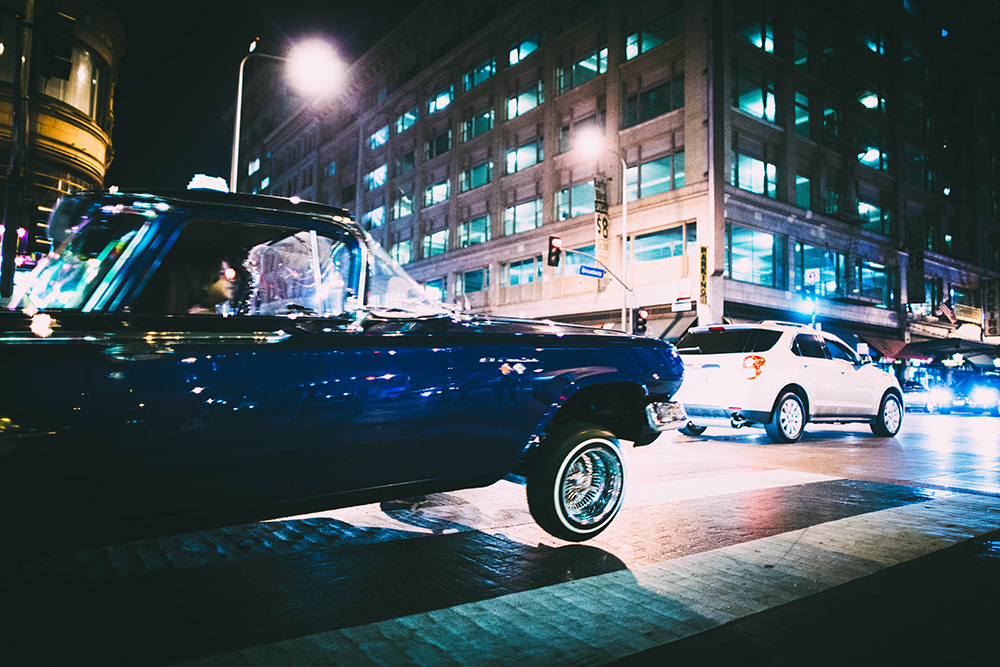 It wouldn’t be LA without a chevy bouncing down the street. (Photo by @vzmaestro) 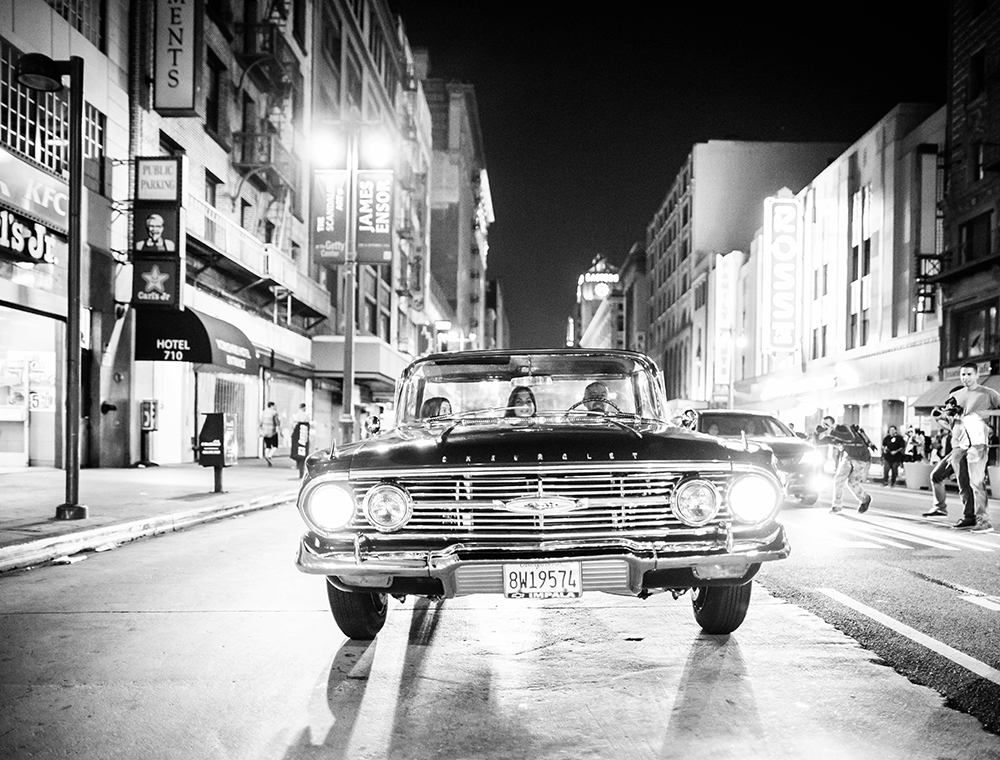 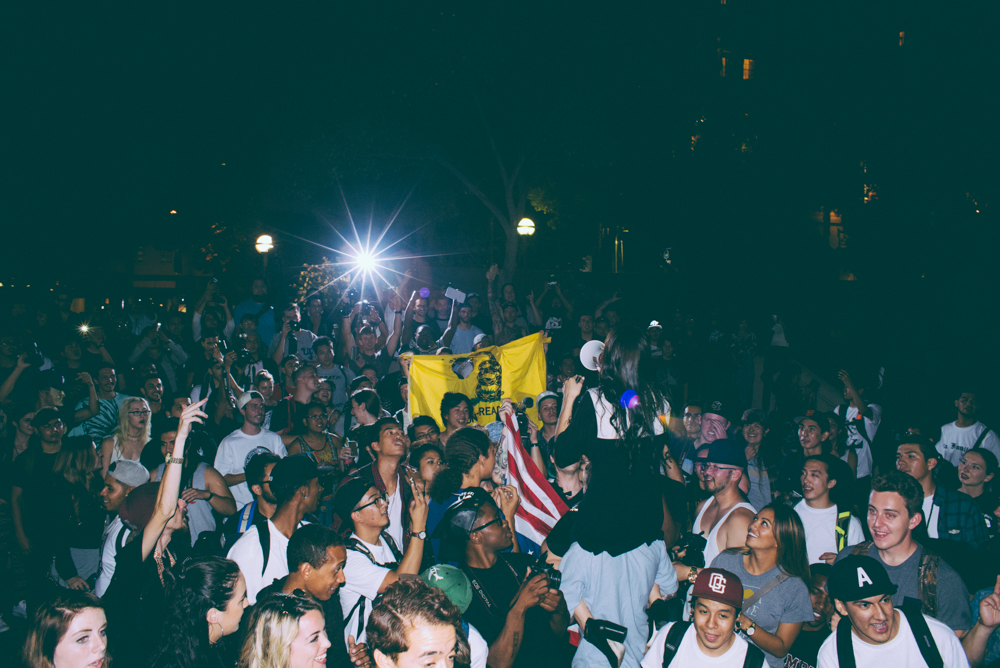 After 3 hours of exploring Downtown LA, the group was still lively back at the start point, Pershing Square. (Photo by @marshall_p)

Along with all the other homies who showed up, my brother Izzy wouldn’t dare to miss one of these. (Photo by @poeticsky) 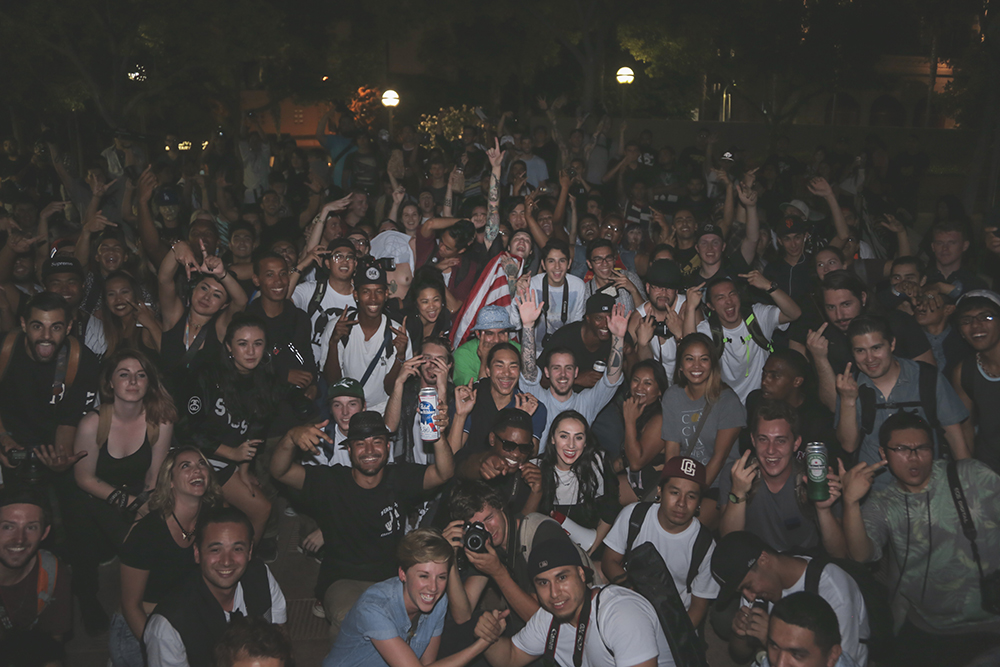 Even though this only like half of the group, we still managed to get a few group shots. (Photo by @henny_sf)