In 1999, Patrick Miller and Patrick McNeil (then known as A LIFE, but later known as FAILE) started wheatpasting nudes on the streets of New York City. “We wanted to do something a little different on the street from what was out there at the time,” Miller explains. “The work on the street felt very masculine in a way. We were attracted to the idea of something softer, something more feminine.” In order to create this refined feel, FAILE appropriated found images and transformed them with collage, printmaking, and painting techniques, as well as a “sense of storytelling.” Their aesthetic made them distinct in the street art world, and in 2008, FAILE appeared in Banksy’s Cans—a festival that took place in a London train tunnel—as well as in a group exhibition at the Tate Modern.

Since this defining moment, FAILE continued to utilize printmaking and painting, but expanded their oeuvre to include sculpture and interactive installations. Two of these massive works—”Temple” and the “Deluxx Fluxx Arcade”—are currently on view at their exhibition, Savage/Sacred Young Minds, at the Brooklyn Museum. “Deluxx Fluxx Arcade” is a fully functioning arcade, with repurposed video games, pinball machines, and foosball tables, whereas “Temple” is a full-scale ancient ruin with Faile’s imagery chiseled in the structure’s reliefs. “The two [installations] work together and explore this idea of iconography mixed with ideas of high and low art,” Miller explains in the following interview. “How revered icons can start in the most sacred of spaces from churches and temples as paintings and sculptures, and then trickle down to live as candles and stickers in gas stations, but still convey the same kind of power and reverence beyond their material and setting.” The exhibition closes on October 4, so we highly recommend heading there on Saturday.

Patrick Miller and Patrick McNeil of Faile at their “Wishing On You” installation in Times Square. Photo © Jaime Rojo of brooklynstreetart.com

ZIO: Why did you guys get into stenciling and wheatpasting? What attracted you to it?
PATRICK MILLER/FAILE: I think the looseness of it. The way it played in public spaces. The direct messages you could put out there with it. For us, it was a way to get our work out there in a direct way. It let us be a part of this small, almost secret language that was happening on the street. Speaking to those that were searching for something. There was an elegance to that mixed with the effect of the elements and interaction from others.

What was the first work you put up as FAILE? It was a set of female nudes, wasn’t it? What was the original idea behind your work?
Yes, the female nudes were the first series as FAILE. Originally, with that series, we wanted to do something a little different on the street from what was out there at the time. The work on the street felt very masculine or political or violent in a way. We were attracted to the idea of something softer, something more feminine. We were working originally under the name A Life, as a new creation that led us to this idea of fertility and to a classical art theme, thus the female nude.

“[STENCILING AND WHEATPASTING] LET US BE A PART OF THIS SMALL, ALMOST SECRET LANGUAGE THAT WAS HAPPENING ON THE STREET.”

How has your work, and its message, changed since then?
It’s interesting as, unbeknownst to us, the name A Life was in use a few months before we started putting work up [Editor’s note: By streetwear brand Alife]. That first challenge of having to change our name and finding the anagram FAILE, this idea of having to look past your failures to find a life, sort of guides us. We try to take chances and be open to where our process takes us. I think the message we try to create through the work is a search for meaning in our urban environs. A sense of storytelling, and the duality found in life’s journey and finding our place in that story.

Given our work starts with finding bits and pieces of the past and weaving those together, I think our larger sculptural work is the same. It becomes unique and special in the way we weave together our works to tell a bigger story or highlight a kind of modern myth-making. 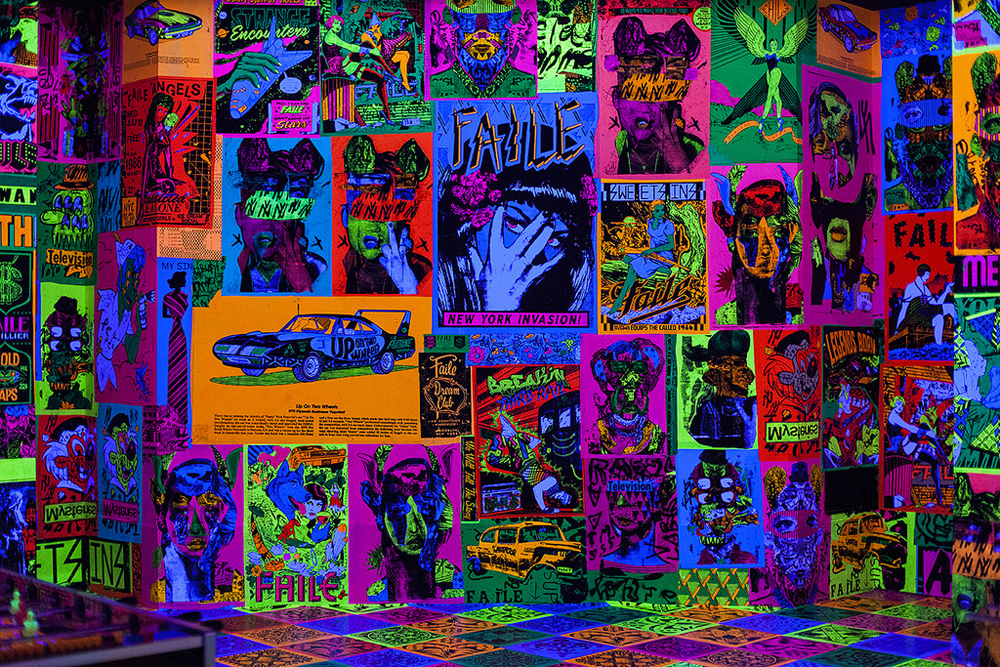 What has kept the two of you together over the years, and not deciding to make work on your own?
I believe we’re both generally able to explore—within the framework of FAILE—the kinds of things we want to as artists. We both bring different things to the table as well. Our strengths are not the same. The things I like to focus on are different than what McNeil focuses on. In that way, I think we do well in pushing each other to make great work and stay challenged, while still not having to feel competitive in any way. And we have a long friendship, a sort of brotherhood really. It’s become a part of us, a part of our lives, and I think we both know how fortunate we are to be able to get up everyday and create and have a platform and audience for the work.

You guys have a fantastic exhibition up at the Brooklyn Museum right now. Can you tell us a little bit about what is in it, and particularly the idea, inspiration, and realization of the Deluxx Fluxx arcade and FAILE Temple?
We’ve always been inspired by New York and Brooklyn. We are always observing and documenting the environment around us—the typography on signs and stores, the flyers on light poles, the way imagery breaks down over time in posters and adverts. We are always paying attention to this. Being young, we lived in more suburban areas in the Southwest, so many of the things we were inspired by then was found in things we collected. Skateboard and heavy metal magazines, baseball cards, comic books, posters, stickers, video games—these were the things we were looking at and much of this inspired the way we look at the world today and the way we create in our work.

The Temple in Savage/Sacred Young Minds was initially inspired by the 15th-century Florentine sculptor Della Robia. His large-scale ceramics were really amazing to us and not something anyone really does anymore. That paired with a lot of research and exploration of castles, monasteries, and churches in Portugal, and things we were seeing on the street in Brooklyn, led to the Temple being born. 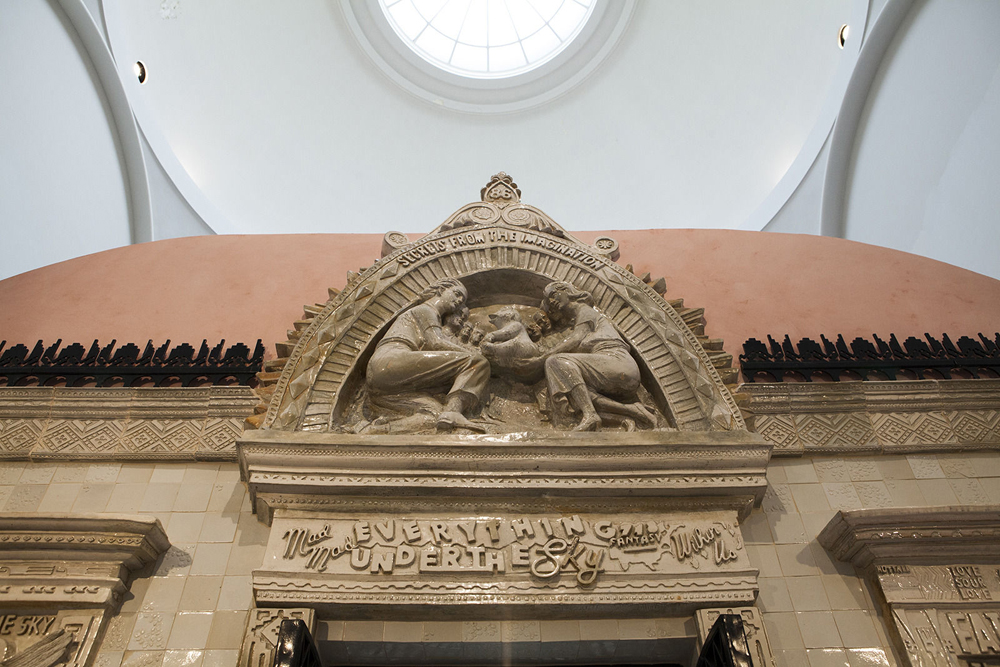 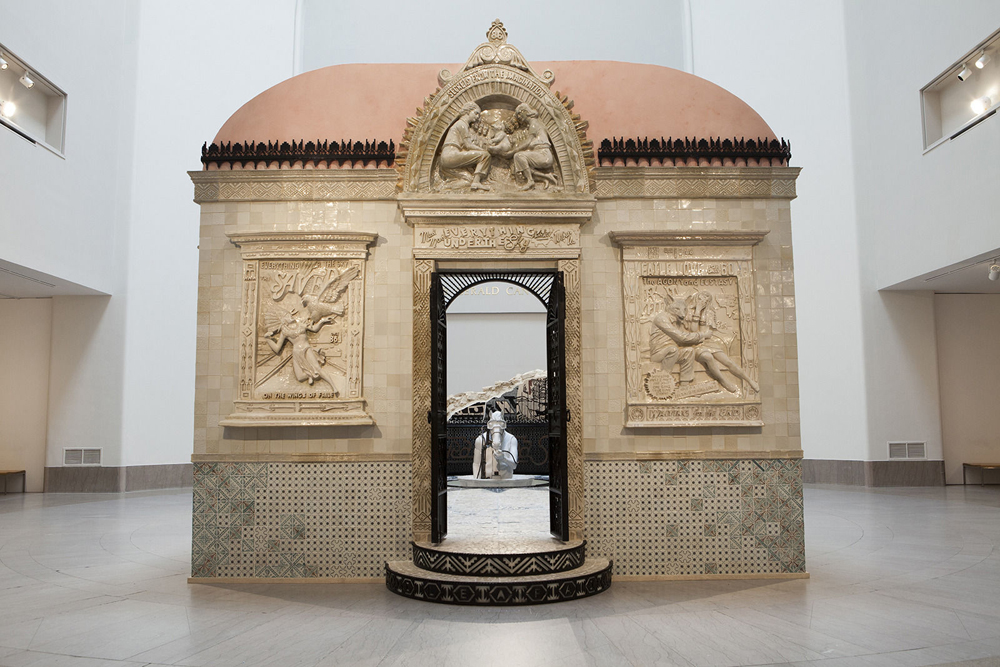 PATRICK MILLER: The Deluxx Fluxx arcade stemmed from a conversation with our collaborator in that project, BAST. We were discussing ideas for an upcoming show we were doing together, which started as a discussion about installations of found furniture and led to pinball machines and, ultimately, an arcade. We grew up going to arcades, playing in them, winning and losing in them, and just being absorbed by the space. That is something we feel is lost today and something we wanted to create anew. 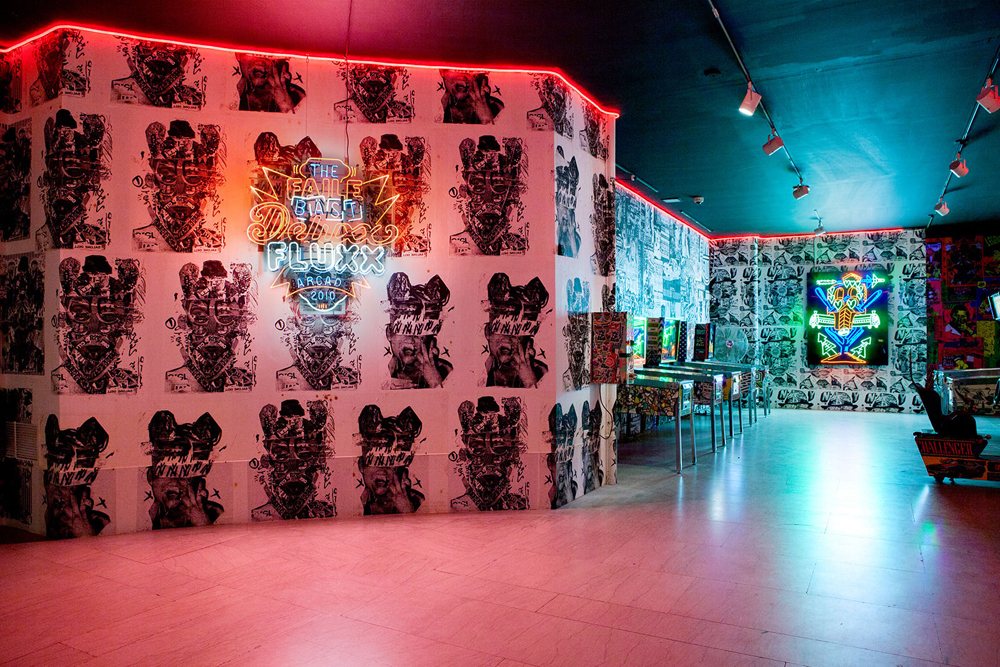 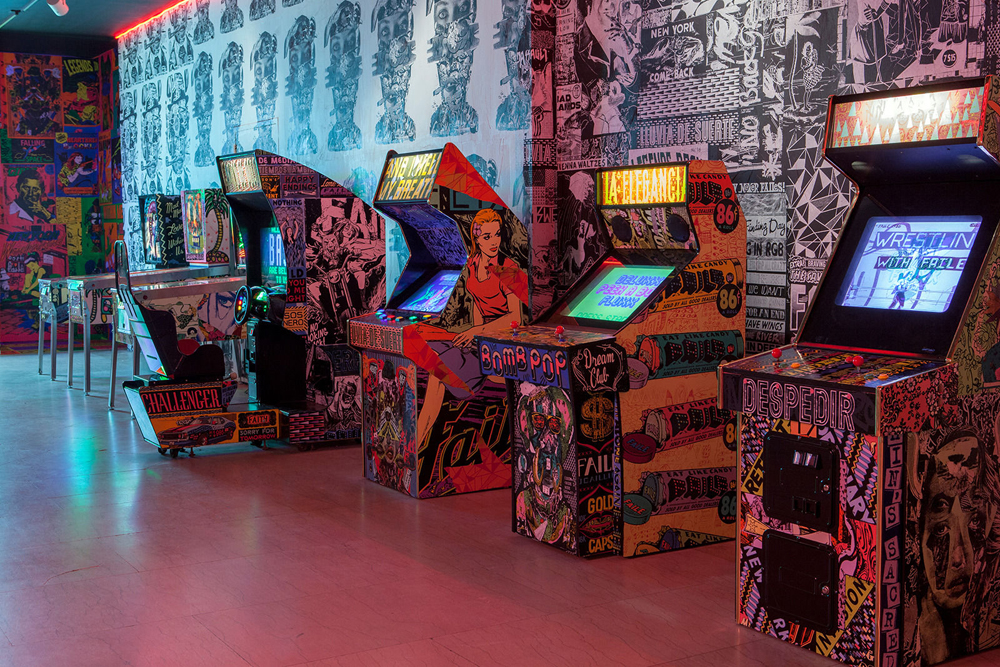 You also had a recent installation in Times Square. What was this project about? How did it come to be?
Since 2008, we’ve been really inspired by this idea of what do you pray for in a modern society. Especially living in a large metropolitan city. This was really the initial spark behind the prayer wheel works. We’d envisioned doing this larger hand-carved prayer wheel with a pagoda-like structure around it to explore this idea of elevating elements of desire and capitalism to a spiritual form.

“I THINK THE MESSAGE WE TRY TO CREATE THROUGH THE WORK IS A SEARCH FOR MEANING IN OUR URBAN ENVIRONS.”

We’d met Sherry Dobbin from Times Square Arts a few years ago and had always said we would let her know if we had any ideas. Despite being a bit overwhelmed preparing for the show at the Brooklyn Museum, Sherry pushed us to realize this project as it had such a connection to Times Square, both historically and in its present state.

The structure is all wood/carved wood. There are carnivalesque lights in the ceiling that are powered by people spinning the wheel. We really like this idea of audience participation and the ability to bring a piece to life through their actions. 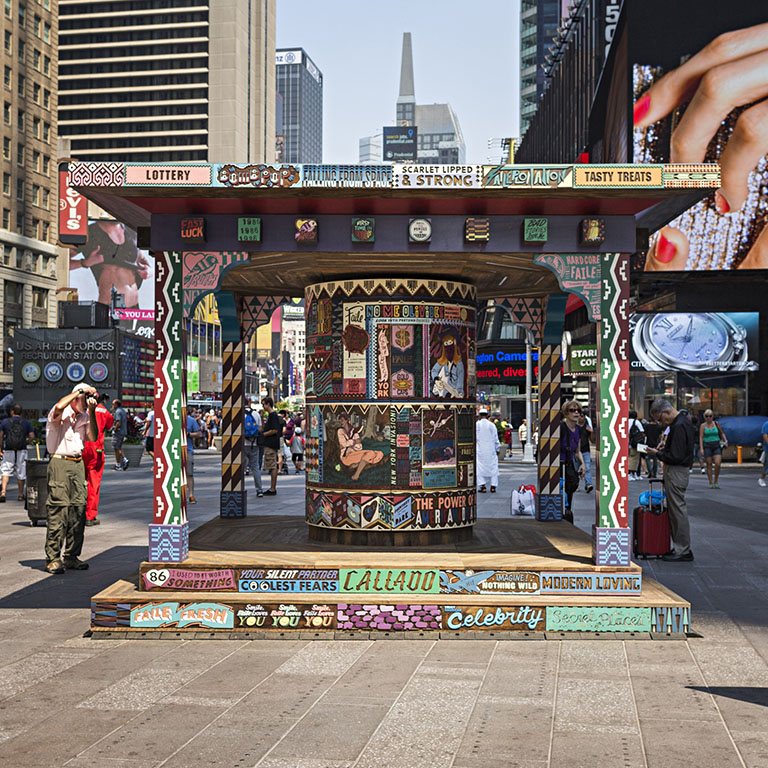 What do you want to convey through this work?
We just want people to imagine this idea of modern myth-making. Asking viewers to think about what spirituality and desire look like in the context of affluent global cities and create a place of spontaneity and shared experience through the work.

Looking back to when you first started stenciling and wheatpasting, do you think you have achieved what you set out to achieve? What do you think your younger selves would think of you now?
We started out on the street to directly interact with the public—to simply get our work out there and not have to ask to be let into the system of high art despite respecting its place and hoping to have a place in it someday. In a way, that’s always been a struggle. To now have a solo show at one of the top museums in New York City and concurrently have a public art piece in one of the most visited places in the world in Times Square really says something about how far we’ve come. We still feel like we have a lot left to accomplish but it is a special moment given where we started. 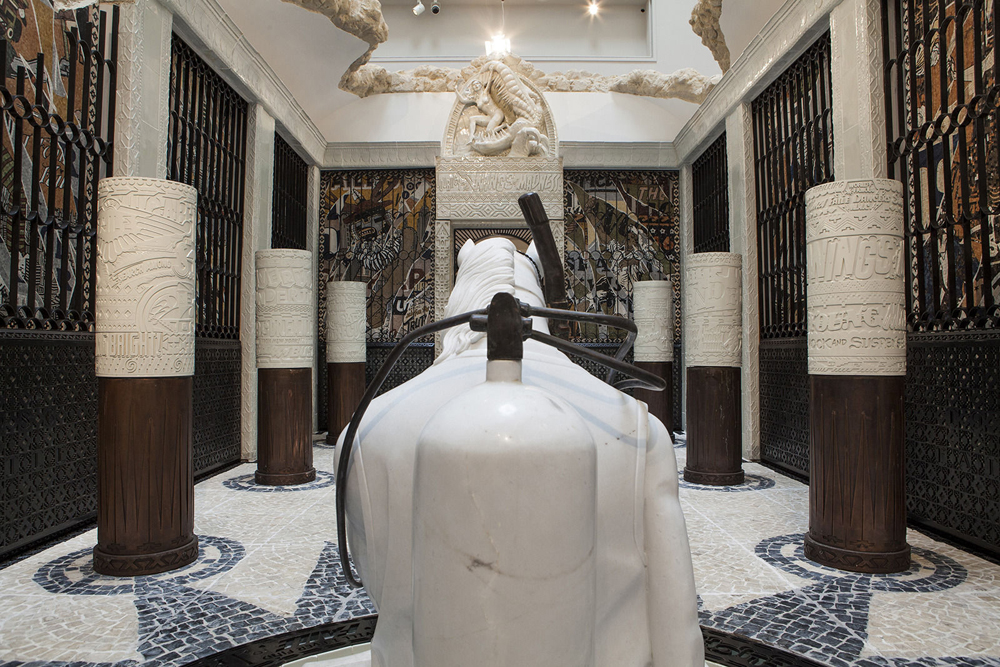 To check out the Savage/Sacred Young Minds and Deluxx Fluxx arcade, visit Brooklyn Museum by the end of the week. The exhibition unfortunately ends October 4. Keep up with FAILE on their website. Photos courtesy of FAILE and Scott Turner.