David Marc Grant tells me some of his favorite memories as a child growing up in San Francisco were going to see movies like Star Trek, Star Wars, and Indiana Jones in the movie theaters. A third generation San Franciscan born into a family with an obvious interest in filmmaking, he originally thought he wanted to make films. Those thoughts lasted up until high school when Grant’s other fascinations turned into passion, that fascination was art. Drawing influences from the contemporary lowbrow and constructivism art movements, Grant’s colorful landscapes focus on various geopolitical issues through his fascination with Dystopian fantasy and fiction. Last week I stopped by White Walls Gallery and found Grant alone in the back room quietly painting away in preparation for his current show at White Walls Shooting Gallery, Look What Came Before and That Will Be The Future. Looking physically exhausted but still enthusiastic, Grant agreed to sit down to talk about his visual language, world building, and the early lowbrow art scene of San Francisco. 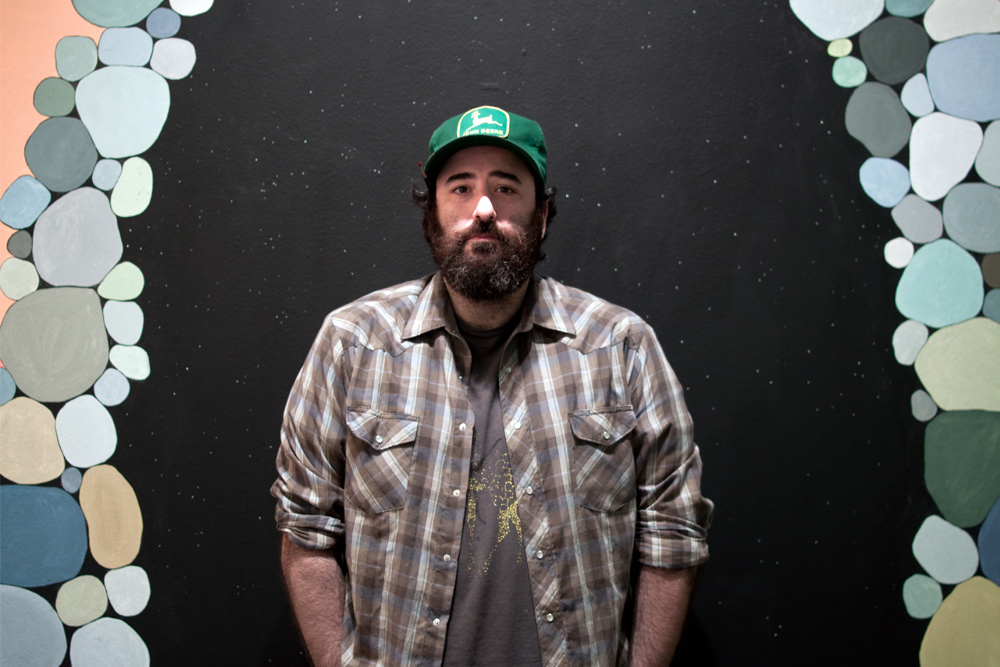 JOSH SCHIELIE: For those who aren’t familiar with yourself, who are you and can you tell us a little bit about your background?
DAVID MARC GRANT: I’m David Marc Grant, I am a San Francisco third generation native. Growing up in the ’70s and ’80s, I was always a kid that was interested in genre films like Star Trek, Star Wars, and Indiana Jones. Up until high school I thought I wanted to make films as a career, but I always found myself drawing and painting. I had always been the type of kid that was always in my room working on projects or just imagining, you know, like that imagination when you’re really young playing with toys. I just kind of wanted to be in my own fantasy world. I was the kid that would come out his room to say hi to everyone and then go back into the room to get back to imagination land. As I grew up, I was really interested in Dystopian science fiction, and when I was in high school environmentalism was a really big deal. In the ’90s there was a big environmental movement and I remember this girl, Julia Butterfly Hill, went and sat up in a redwood tree for two years. I wouldn’t say I became an environmental activist, but I’ve always had a sense that the way we are living is not correct. I’ve always had this sense that we’re headed for some kind of disaster, and I don’t think I’m alone in that sense of thinking either. 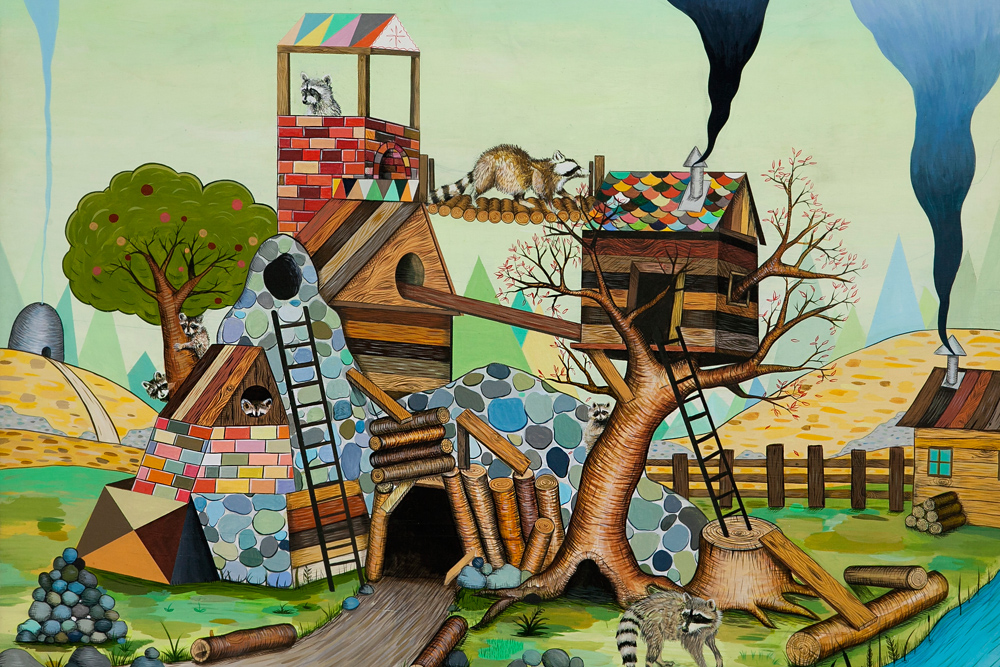 How would you describe the art you make?
I was always interested in art that had a bold colorful graphic quality to it that it was rooted in. I liked things that were semi-commercial like advertising, pop art, and comic books. That was all sort of going on in that lowbrow art scene, people were making high art but they were working with comic books and pop media stuff. If I had to put my work in a specific category, I guess I would describe my work as world building. It’s kind of a visual exploration of what the world might kind of look like after some unknown cataclysm. There’s a sense that the world would be desolate yet magical. We would go back to some kind of simpler way of living. A lot of the recent work has been paintings of structures that might exist in that future world. 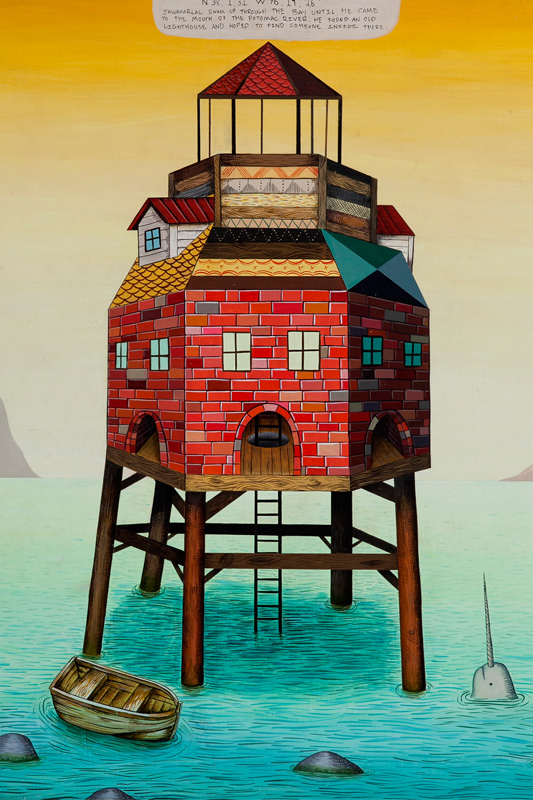 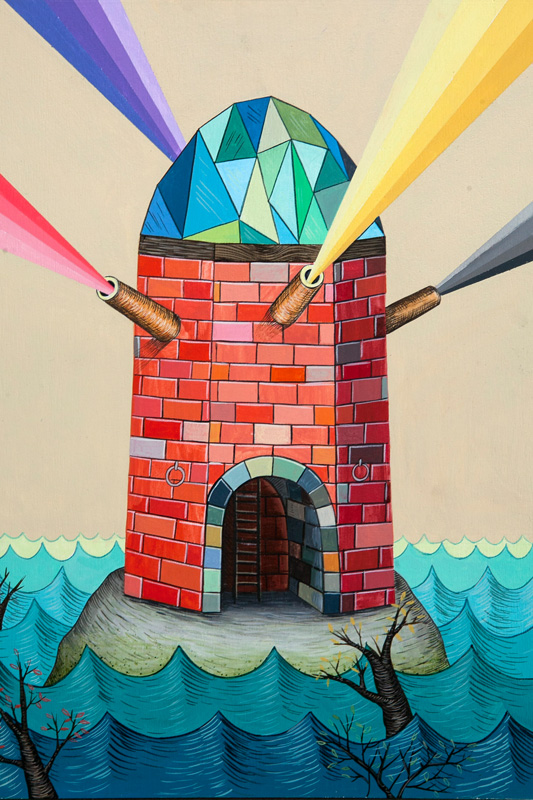 What was the San Francisco art scene like when you were an emerging artist?
Originally, I didn’t know anything about the local art scene. One of my college professors started recommending that I submit work to galleries throughout the city. This was the ’90s in San Francisco during the first real tech boom here. During the same time, the Mission Artist Movement was also taking place, so a lot of the local art was about the tension between what the city had been like and what it was now becoming (sounds familiar). I remember going into a gallery, I think it was John Berggruen’s gallery, and I saw Margaret Kilgallen’s work. I was completely blown away. It was so simple yet so elegant, I couldn’t imagine how it was made. At that moment I got bitten by this idea of curiosity – I stopped wondering so much about the meaning behind the piece, and really started thinking about how the piece was made. For me as a maker, I want to know how they made it, and if it’s something I like, I want to learn how to do it.

Being someone that grew up in San Francisco, why did you choose to stay in San Francisco?
I’m from San Francisco and I never felt the urge to leave, I didn’t really see that there was anywhere else that I wanted to be – as an artist or as a person. Yeah, there’s LA, but I’ve always hated the geography of LA. It’s not the people that live there, it’s just the physical qualities of the city have always kind of bugged me. The other option was always New York, but it seemed like that everyone else was doing it. At the time it was like, “If you want to become an artist you’ve got to go to New York,” I was like, “Fuck that, fuck what everybody else is doing, I don’t have to go to New York to become an artist.” 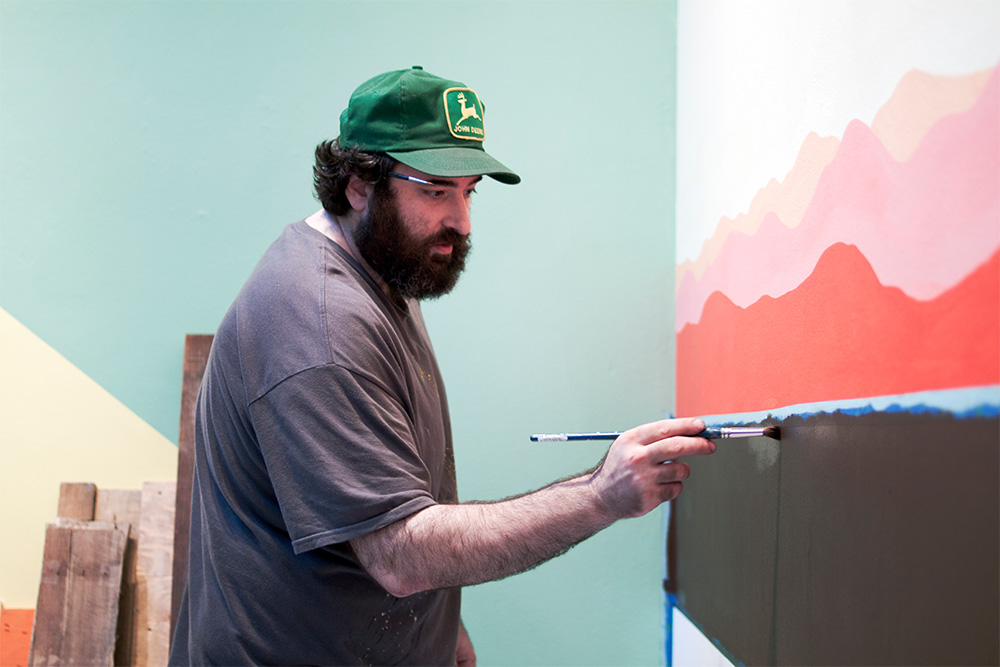 Have you always had the same style?
When I first got to SFAI, I didn’t know what type of artist I wanted to be. I really found my first interest in art from the movement coming out of the Mission School. They were influenced by mural and graffiti art, comic art, and folk art forms like sign painting and hobo art. People say that I have a lot of color, layering, and geometric type forms throughout my works, but it just appeals to me for some reason. If you look at human history, all around the world people have always made the same shapes and symbols. There’s something inherent in those shapes that’s part of the universe or part of our understanding of the universe.

So it sounds like you have created this specific visual language for yourself.
I think as you begin to develop what you like to make in a body of work, and through the style that is synonymous with who you are being to develop a visual language. There are variations in all languages, but what they all have in common is that they have a set of characters and order. I just think of those shapes as letters in my own language, the geometry is just part of figuring out what language appeals to you, otherwise you have a language that nobody will understand when they look at it. You just start to recognize what works and it becomes something that you continually do. It becomes part of that evolving language but it’s always sort of evolving. 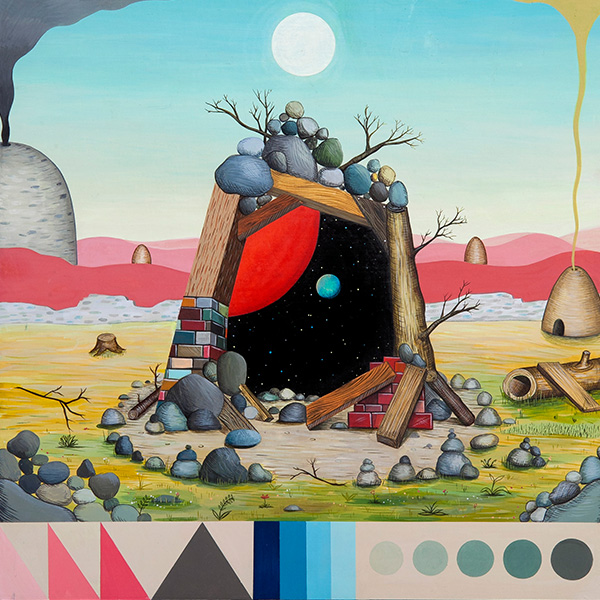 Can you speak about your current installment at White Walls Gallery, Look What Came Before, And That Will Be The Future?
I used to watch a lot of Star Trek with my dad on TV. There is an episode called “City on the Edge of Forever” and they go through this portal and the portal takes you to different times in history and different planets. This is sort of vaguely rooted into a science fiction trope of this portal that will take you to another place. In this case, my portal was built from rocks which gives a sense that it’s not futuristic, it’s actually rather ancient. It’s been there all along. 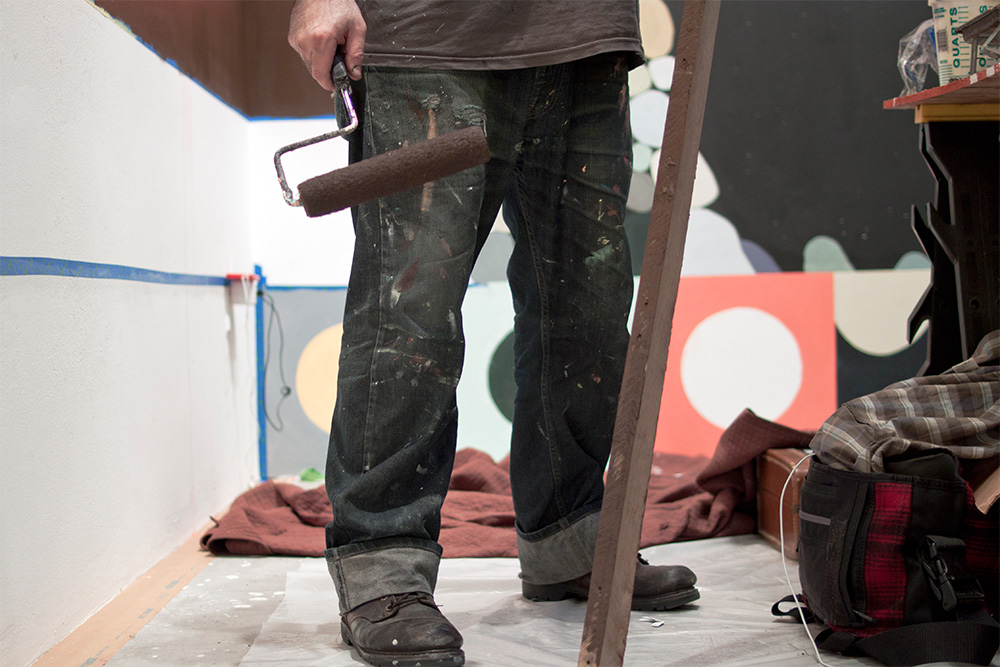 What do you find is your greatest challenge in making art?
I don’t think the greatest challenge comes in making art. The greatest challenge is becoming an artist. As far as individual pieces go, for me, the hardest part is usually just the blocking and composition; the pre-drawing. It’s hard for me because I want to see the thing is immediately, but it’s just not done. The hardest part for me wants to see the thing immediately, and knowing that there is still tons of work to do. There’s a lot of drawing that still needs to be done and a lot of technical stuff that I just really don’t want to do. I love the painting but I don’t particularly love the drafting of things, it feels really tedious to me. That’s why I quickly tired of doing portraits and drawing from life, because all that felt like to me was just an exercise. After you make the preliminary sketch and you start working, that’s when you get that excitement and that’s when change evolves that you could only gain through process. In other words, I don’t think the greatest ideas come to you prior to the painting, the greatest ideas come to you while you’re making it. 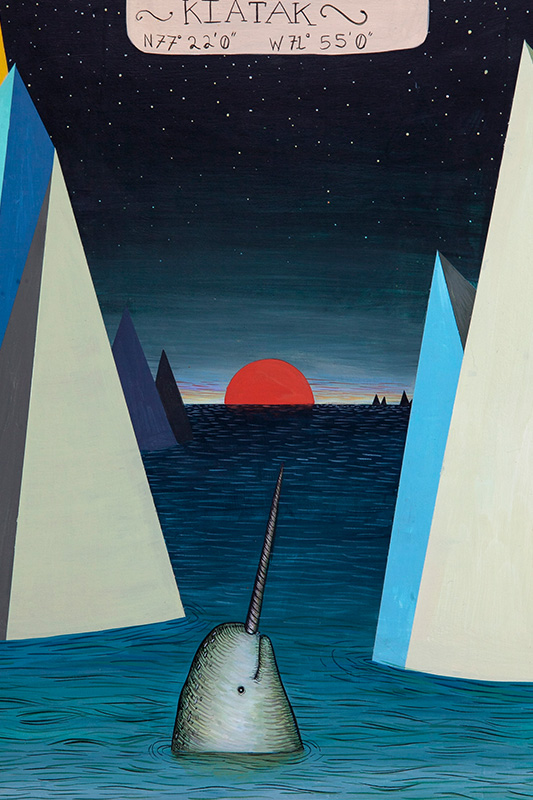 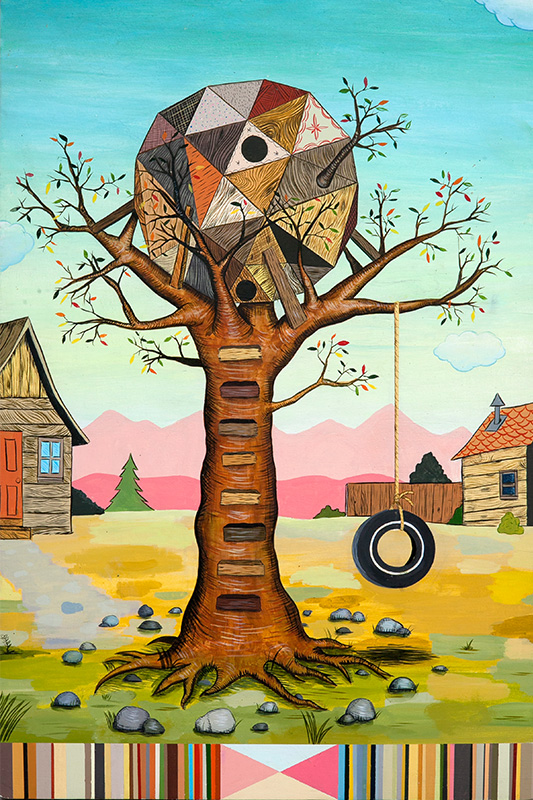 Why is art important?
Making art, to me, is a personal experience. It’s very much a personal thing. Maybe some people make art and they make it in a very collaborative form. I think that making things by hand is hard-wired into us as much as eating or sleeping or anything else we do; it’s a part of being a human thing. I would say it’s important because it connects us with our own humanity and it connects us with each other because it is this shared experience that all of human history has a relationship with. There isn’t a place in the world where people haven’t made art and used visual language to convey ideas or to tell stories or to share values. So I think now, more than ever, it’s important. The more technological we become, the closer we get to this sort of transhumanist moment of singularity. I guess I’m sort of an old-fashioned type of person that looks back nostalgically on the past. My heroes have always been artists, you know?

David Marc Grant’s installment “Look What Came Before, And That Will Be The Future” is on view now, Tuesday through Saturday 12-7pm, through October 4th at White Walls Shooting Gallery.