If Fairfax is a close-knit family of streetwear brethren, then there’s a new addition to the family. Founded in 2010 by Josh Vides when he was a van driver for The Hundreds circling the name “CLSC” on a sheet of paper, the LA brand has come a long way to now opening its first full-fledged brick and mortar tomorrow, August 8, at 517 1/2 N. Fairfax Avenue. We went behind CLSC’S unopened doors to to catch up with Josh, the founder, and hear his opinion on the past dictating the future, the fear attached to chasing a dream, Aaron Levant’s inspirational discouragement, and CLSC’S intent to create a new way of shopping for Fairfax. 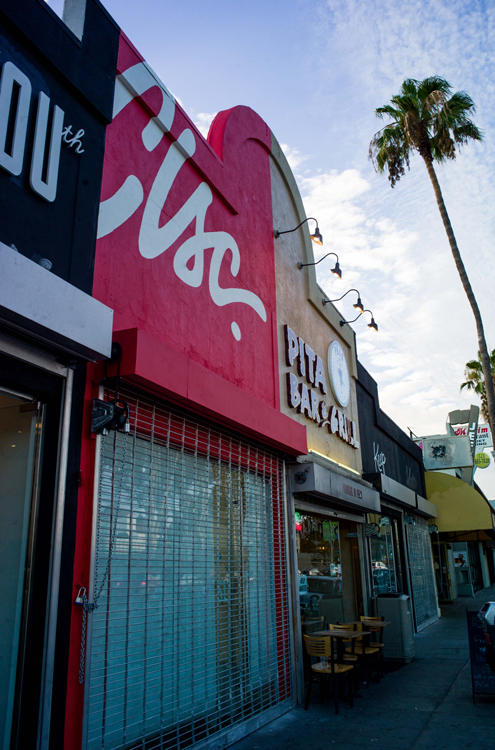 TODD: This might be a weird question, but is there one color you want people to see when they think of your brand, CLSC?
JOSHUA VIDES: Is wood a color? Can I say wood?

It’s not, but you can definitely say wood.
I would say wood. Because it’s classic. A mixture of colors, whatever color wood is.

When you had the original idea for CLSC, did you always picture it on Fairfax?
Yeah, I mean, I’ve been coming here for fucking years. When I first got introduced into streetwear, it was Stussy, but Stussy was already on La Brea. But La Brea was weird, it was literally only Stussy , Undefeated, and Union, and I wasn’t really into those enough to go there. So this was kind of always like home base—I’d come here and just walk the block and get cool with everybody. So when the opportunity came up, yeah, I pulled the trigger. It makes sense.

How does it feel opening up? Is it rewarding or is it a whole new level of fear?
Well, we’re not opened yet so, hopefully, it feels good. No, so far—we got the keys two months ago, so for the last two months it’s been crazy hectic, but it’s really exciting. We get to open up our doors to the world basically. Anybody from anywhere can come and see and feel what CLSC is now. As of this point, we’re just only web-based, we don’t have a flagship store. And, for the most part, we’ll be here hanging out and kicking it. We’ll be working out of the back, which gives people an opportunity to not only see the store, but meet the staff. Which is huge for people.

I always feel like the lessons you learn the best are the ones you fuck up the hardest the first time. So is there anything you fucked up that you wish someone told you about before you started all this?
I don’t know if I can answer that, but I can say that one of the first times I met Aaron Levant, the owner of Agenda, I was like, “Hey, I want to start a brand, what insight do you have?” He’s like, “Don’t start one.” So I guess that might’ve been something. I’m glad that I heard because once he told me that, I was like, “You suck, Aaron Levant. I’m going to make this shit happen.” So I don’t know if there’s anything better than telling someone that they can’t do it. I guess whatever he told me helped.

When did you leave The Hundreds to pursue CLSC full time?
It was my 25th birthday, it was kind of rad—June 20th, 2014. I got a call from my accountant the day before and he was like, “Yeah, you can quit your job and support yourself now.” The next day I went to Scotty and Ben and told them… Scotty was like, “Fuck yeah. Hell yeah.” Then, later on in the day, Ben came up to me and was like, “I’m proud of you.”

My first streetwear job was at The Hundreds. Technically, Mixed Media when it was still in the Valley and The Hundreds was at Wall Street. Jon Hundreds aka Archwood hired me as this—I don’t even know why the fuck he hired me, I was getting about $7 an hour. Then a week after that, whoever was driving the van crashed it and went to jail so Jon was like, “You’re going to drive the van.” I was like, “All right, fuck it.” So I became the van driver, and did that for a year and a half in about 2010. Then in the end of 2013 to middle 2014 in June, I was a West Coast sales representative.

Was that hard making the decision to part completely?
Fuck yeah, dude! I got a kid! So my accountant calls me and he’s like, “Yo, you can quit your job.” Then I’m like, “Okay, so how does this work? Am I going to be on a salary? Can I get a bunch of money? Can I go buy a Porsche tomorrow?” He’s like, “No, this is how it works: you’re the last person to get paid.” At that time, Red was our only employee. He’s like, “So, Red has a salary, no matter what, he gets paid. After he gets paid and after rents get paid and fucking Internet and everything, whatever money we have left, you can pick from.” He’s like, “As of today, you can afford yourself. But in a month, after production, there might not be any money in the account.” It’s kind of like a go for it.

When you were working as a truck driver, did you think you’d get this far? Was it even on your radar?
Yeah, I mean, I always knew. I was listening to—have you heard that Ron-On-One podcast where he interviews Ben? It’s pretty fucking good. He’s like, “Yo, so what made you and Bobby get out of fucking law school?” And Ben was like, “We just knew it. We knew that we could figure this thing out because we liked it enough and we were interested enough.”

I knew when I started a brand that I was going to figure it out and I was going to become a “big dog.” It wasn’t because I had experience from streetwear or I went to college for it or anything—it was just one of those feelings. When I was driving a van, Ben and Bobby didn’t really know I existed. I was like, “One day, I’m going to do a collaboration with The Hundreds.” The shirt is laying right there. It drops for the store opening. We probably could’ve done one three years ago, but this is what made the most sense. I kind of always knew it was going to happen, this is my thing. Everyone has a thing, I was just fortunate enough to figure this out at an early age. 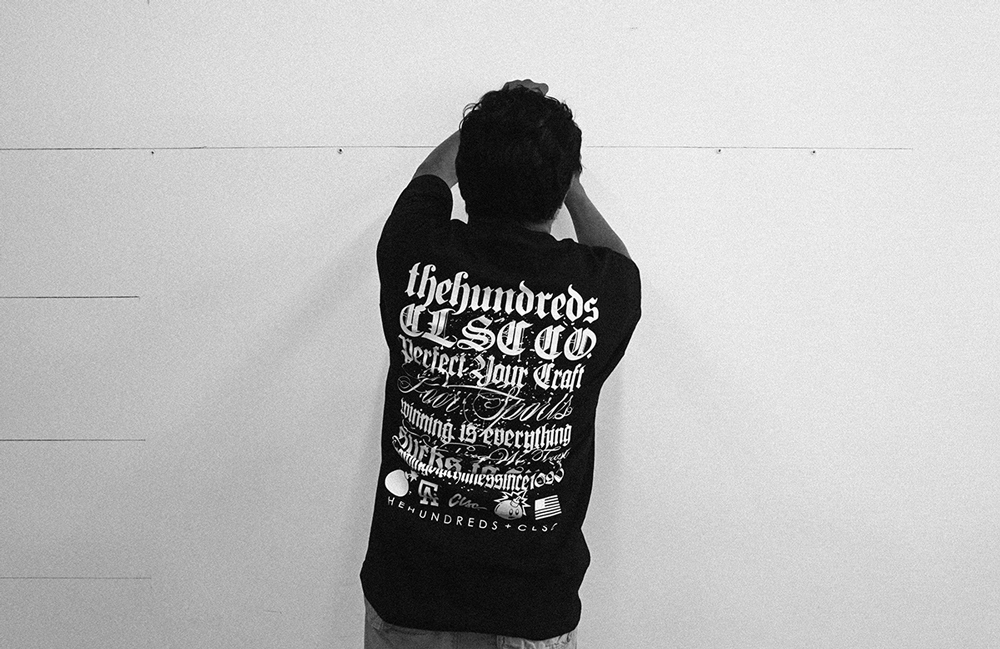 What’re you mainly going to be carrying? Any staple pieces?
You’re the first one to ask that, so I guess you guys are the first ones knowing. So, I’ll take a step back and tell you why we’re doing this. So, we’re not only carrying CLSC in this store, we’re going to carry, I think, about 10 brands in this store. Which we haven’t really told people about.

I have a brand and this is technically our flagship store, but there’s two reasons why I want to do it. One is that I wouldn’t be here without the brands that we’re going to carry in this store. So we’re going to carry XLARGE Japan, FUCT—which is a huge inspiration to me. Then we get to carry my homies like Ice Cold New York, Streetx out of Australia, Butter Goods out of Australia.

So I have this location, I have this business where I can not only highlight my products, but my friends products and the people that I look up to’s products. Why wouldn’t I do that?

That’s the main reason I want to do it and two, I’m a man of taking advantage of opportunities. The brands that I’m carrying are not on Fairfax, they’re not on La Brea, they’re not on Melrose. So it’s like if someone else isn’t doing it, I’m going to fucking do it. 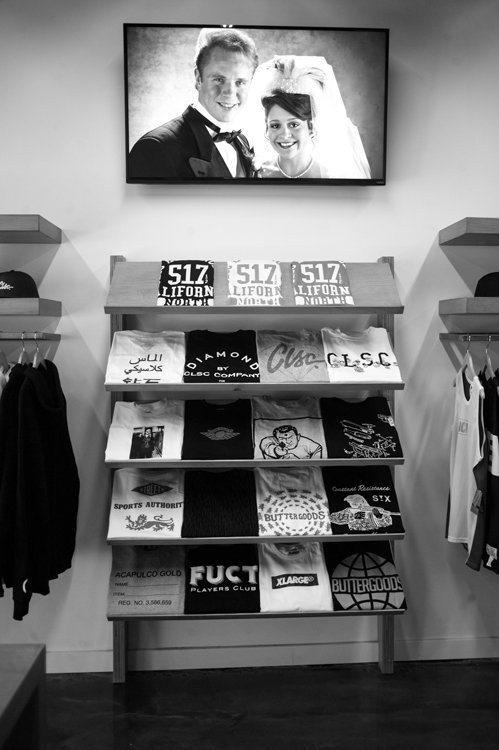 You probably have been asked this and will be asked this a thousand times, but what advice would you give to young people trying to start a brand? Would it be don’t do it?
Just go for it. I think anything is possible to be honest. I used to be a fucking firefighter, dude, and I was a shithead in high school. If I were to go back and tell my teachers, “Yo, I was a firefighter at some point,” they’d laugh. I think anything’s possible—it sounds corny as fuck, but yeah. I’ve been to jail, I’ve been expelled, I’ve been suspended, I’ve been anything you can name. If I’m able to figure this shit out, anybody in the world can figure this shit out.

My advice is go for it, hope for the best, but expect the worst. 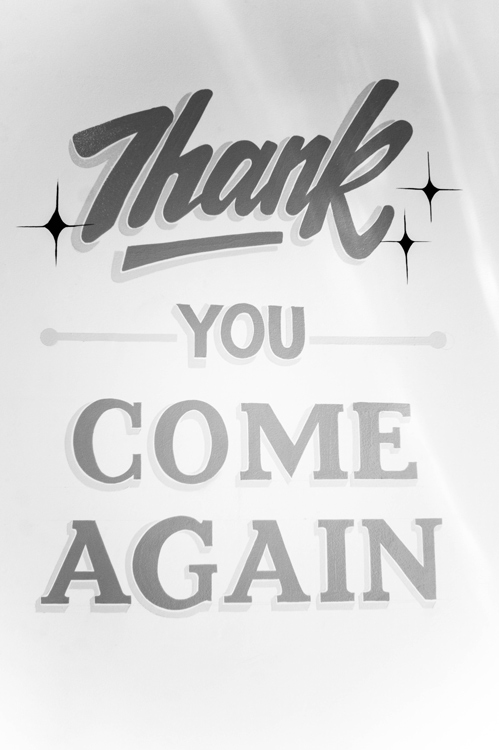