How did Dragon Books come about?

The owner, Jay Penske, always wanted to open a book store since he was a little kid and so the beginnings of this grew out of his personal collection he had been collecting books for a long time since he was very young its always been a dream of his. It’s modeled after the library at Trinity College in Dublin, which is one of his favorite places in the world.

How long has the store been around?

We’ve been open a little over four years.

I didn’t expect it to be in a strip mall.

Yeah, a lot of people are really surprised by that. 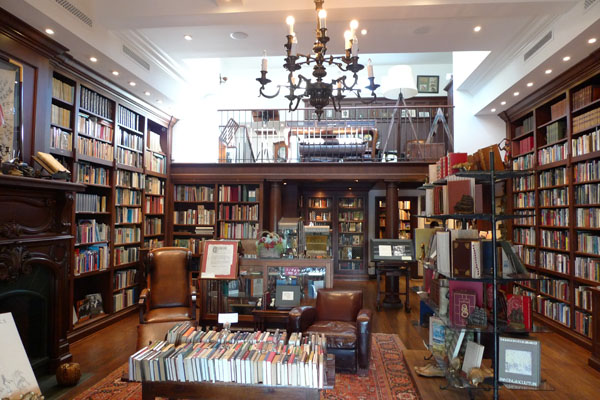 What book in your catalogue is the most rare?

We got a few really rare items, one right now, is one of only two copies in the United States, it’s an extremely rare Italian manual on fencing from the renaissance, it was printed in 1610. A fun anecdote about it isÃ¢â‚¬¦have you seen the movie The Princess Bride? When they are fighting on The Cliffs of Insanity and they are calling out fencing moves, they come from this fencing book. And we’ve had first editions of Ã¢â‚¬Å“Darwin’s: Origin of Species,Ã¢â‚¬ Ã¢â‚¬Å“Newton’s Principia Mathematica, Ã¢â‚¬Å“ we have a really rare manuscript signed by Richard Feynman, he was a great particle physicist that worked on the Manhattan Project, it’s the only copy available on the market.

How do you go about obtaining these rare books?

We buy them at auctions, book fairs, bookseller catalogs or from private collectors who want to shift the focus of their collection and want to sell things off. The owner also travels a lot so when he’s out in other countries he’ll buy things. Pretty much where ever we can find it. 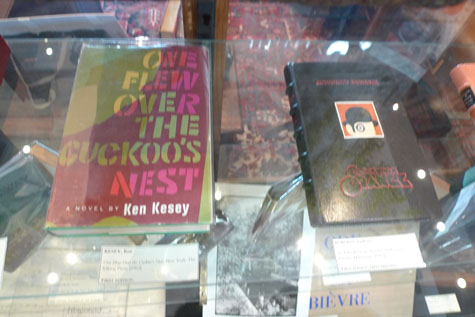 What is the most expensive book that you currently have in the store?

The most expensive thing we’ve had in the past was Newton’s Principia, the retail price on that was about $300,000. Right now, I think its about $39,000 and that’s the first edition of Moby Dick. It belonged to The Doheny Family, and I don’t know if you know but there was murder suicide that happened in their mansion and we think that the book was possibly in the room when it happened there’s a weird splash mark on it. The book was originally in a plain cloth binding and it was put into a new leather bidding and The Doheny Family weren’t people that would change the original appearance of a book. So, it’s possibleÃ¢â‚¬¦for them to take the bidding off the book and put on a new one is because something disgusting got on the book. 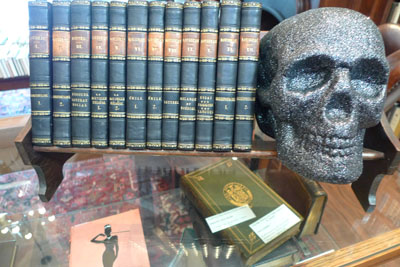 What makes a true Ã¢â‚¬Å“bibliophileÃ¢â‚¬?

A true bibliophile, I think is someone who, when they are collecting books, its not because that book is going to have a resale value. It’s someone who is collecting books because they love them, and it could be a book that is worth $5.00 or $500,000, it’s just something for some reason that book resonates with them. And it’s someone who loves a book not just for the content but for the whole object; the bidding, the paper its on, the typeface they used, the illustrations, the ink, the smell you can probably tell I’m a bibliophile.

So a bibliophile actually reads the book instead of just putting it on display?

It depends. There are some books, especially when your dealing with modern first editions, things by Hemmingway or F. Scott Fitzgerald, you can go get that in paperback. So a lot people who collect those books will just put it on the shelf and then they will just read the paper back. Then there are books that are so rare, you can’t find them in paperback, you can’t get a copy of that anywhere, and those people will sit down and read those. I mean, I know people who have books that they paid $100,000 for and they sit down and read them.

Has technology like Kindle and iPad affected your store and other rare bookstores?

It does nothing but good for the rare book business; it makes books more valuable, for us, the death of the printed book makes the value go up. And we’re not selling new books so it’s not really an issue for us there’s no competition. As a scholar, I think it’s great, and people might freak out to hear a bookseller say this but, there’s a lot things thatÃ¢â‚¬¦you can’t fill your house up with a billion books. You want to fill your house up with just the choice rare books and when you’re trying to get things for light reading or scholarly research, its great.

Tell me about the dÃƒ©cor here at Dragon Books.

Jay designed it himself, I mean he had an architect and other people working with him but like I said before, he really loves the library at Trinity College in Dublin. The floors are all original English oak that he had imported from England. The fireplace is an antique, it’s a Ecole de Nancy Majorelle and was hand-built, that came from a boys reform school in the North of France early 19th century. All the cases are antiques. He’s taken care of every detail. 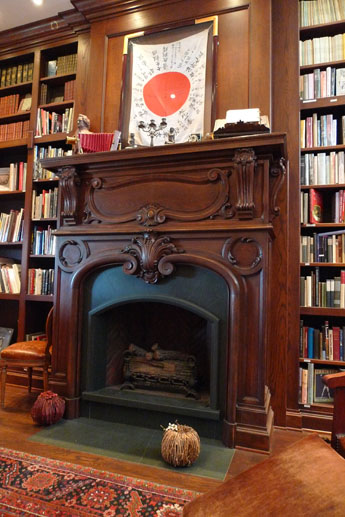 It looks like the one of the studies you see in a classic horror movie or something out of Clue?

Books do fly off the shelves sometimes. Seriously. But I think its in conjunction with a couple customers that come in. I’m not kidding. Before they come in, books will fall off the shelves. And for the longest time I thought we had mice or something. We have cameras and I would play back the camera and the book would just fly off.

We have a lot of different people. We have a lot of really big name celebrities actors, director from Hollywood. We got people that are college professors. One of the people that is a big collector of ours, doesn’t own a car, he lives in a dump of an apartment but his book collection is worth a couple of million dollars he puts all his money into books.

Do you have children’s books?

Yeah, we have a lot of children’s books and we try and have things for little kids they can come in and read. And we also have antique children books and rare ones.

How much time does it take to obtain a first edition of a book?

It depends. Part of what we do on a daily basis is looking all over we’re constantly looking for things. We get auction catalogs sent to us from all over the world but sometimes something is so rare you can wait years to find a copy of it.

I didn’t realize how deep book collecting can get.

People have been murdered for books. It has happened. There have been book dealers that have ended up in the East River in New York over a book. There are books written about famous book thieves. There are people so obsessed that they will risk everything just to get those books. There’s a book written about a guy, a famous book thief, I believe his last name was Gilkey, and it’s about this guy, that for years just scammed people. He wasn’t a bibliophile, he was a biblio-manic he couldn’t control himself he had to have those books and he kept them in this warehouse somewhere. 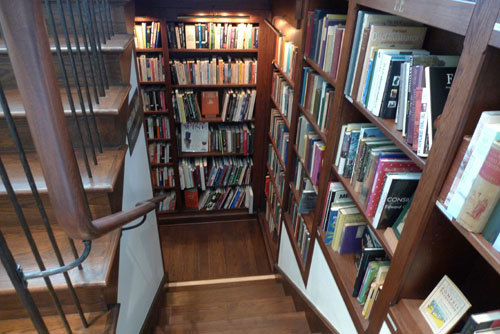 It was beyond that. There are a lot of weird people in this world.

Do you have The Never Ending Story?

I wish, (laughs) I’ve been looking for that book.