Remembering the Genius of Andy Kaufman with Box Brown's New Graphic Novel 'Is This Guy For Real?'

“I am not a comic, I have never told a joke. The comedian’s promise is that he will go out there and make you laugh with him. My only promise is that I will try to entertain you as best I can,” Andy Kaufman.

Before his passing, Andy Kaufman left an impression on everyone who knew him or saw him perform. Depending on who you ask, he was a genius. Or he was crazy. He was hilarious and pushed the boundaries of comedy. Or he was delusional, a hack who didn’t know what he was trying to do.

In Box Brown’s “Is This Guy For Real? The Unbelievable Andy Kaufman Story,” a graphic novel released earlier last month by First Second Books, all of those possibilities are on the table as Kaufman’s life is explored in great detail. 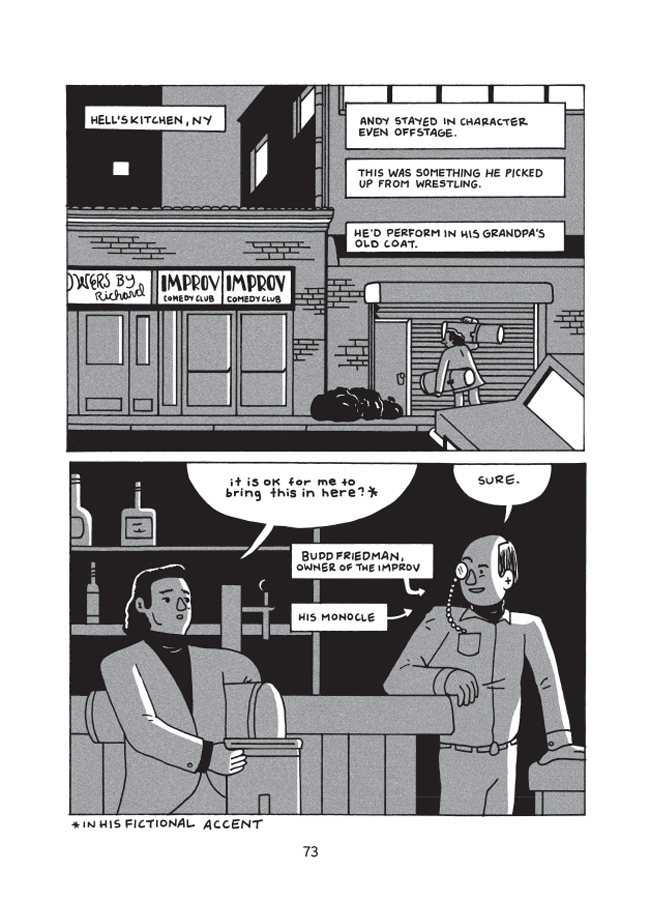 Is This Guy For Real? interior art by Box Brown

The graphic novel starts with a young Kaufman in front of his television in his living room in Long Island, New York, mimicking everyone from Terrytoons studio character Mighty Mouse, to Elvis Presley, to professional wrestler “Nature Boy” Buddy Rogers.

All of these characters became influences for Kaufman’s foray into performance art. Kaufman, who was obsessed with Elvis growing up, eventually created a character called Foreign Man, a fictional character from the fictional island “Caspiar” in the Caspian sea, and in a very high-pitched and accented voice, he performed at a series of comedy clubs in New York. 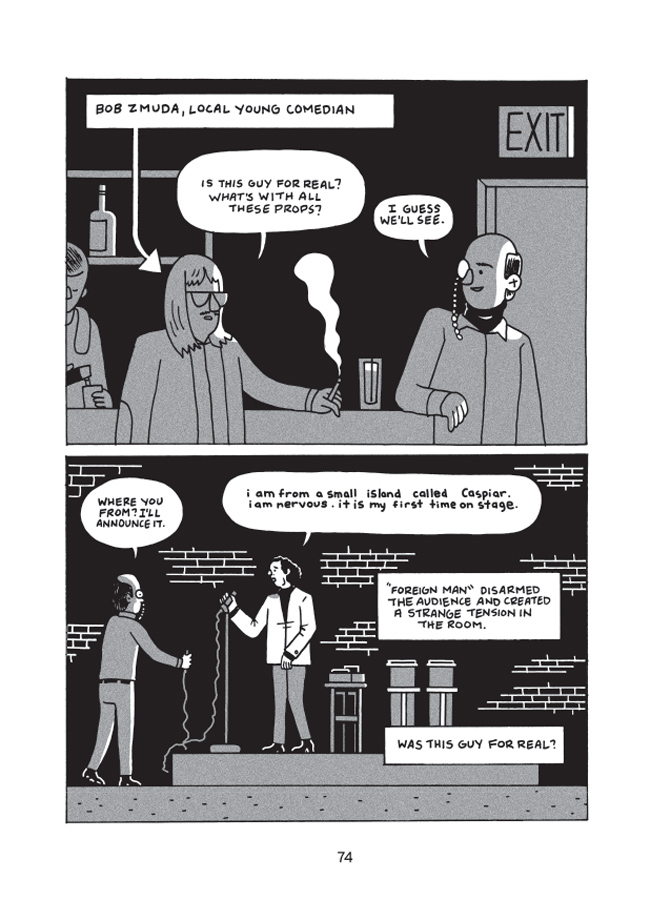 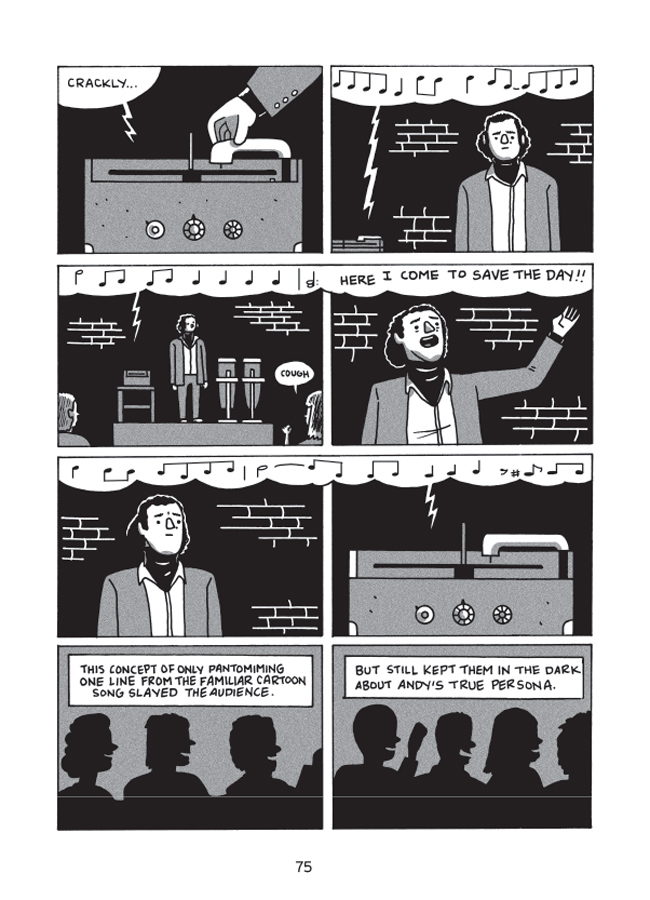 Kaufman would introduce his character on stage to the theme song from the Mighty Mouse cartoon. He performed renditions of Elvis’s songs. It eventually landed him on Saturday Night Live.

Foreign Man was not Kaufman’s only character (later, the character was transformed into Latka Gravas on ABC’s sitcom Taxi, which Kaufman played for 79 episodes). There was also Tony Clifton, who was an audience-abusing, untalented lounge singer character that Kaufman would perform at clubs and concerts.

To add to the blurring lines between reality and performance, sometimes it would be his brother Michael or his friend Bob Zmuda under the disguise. Zmuda might have described Kaufman’s commitment to his craft when he described Andy Kaufman himself as a character. “Oh, you thought that was the real Andy,” Zmuda told The New Yorker in 1999. “That’s just a character he does—Andy Kaufman—nice, normal, sweet boy. That’s not really Andy.”

Kaufman’s true influence can be felt by his foray into wrestling. At the time, wrestling was still portrayed as real to the audience, and although everyone in the industry was in on the staged acts, they never acknowledged it and remained in character throughout. You could see why this would be a fit for what Kaufman was trying to accomplish as a performance artist.

Kaufman was a heel, a bad person in wrestling parlance. But it wasn’t because he was overpowering, or intimidating in any ways, like some of the most powerful wrestlers who are able to evoke fear and hatred from the crowd because of their sheer dominance. Kaufman was just annoying. He was an irritant. He acted dumb but came off as if he was smarter than everyone. He was, in his own character, a despicable, pathetic human being.

Kaufman’s schtick was to offer to wrestle any woman in the ring by offering a prize of $1000 to any woman who could pin him. You could see how that kind of ridiculous stunt would make people hate you. Kaufman soaked it all in, but it would be his feud with Memphis wrestling legend Jerry “The King “ Lawler which would make him an iconic figure in wrestling.

He wasn’t just striving for intellectual comedy, he transformed his entire life into an act.

Even if you are not a wrestling fan, you may remember the iconic Lawler-Kaufman confrontation on “Late Night with David Letterman” in 1982. Lawler and Kaufman sat side-by-side, in character, as they were interviewed by Letterman. Kaufman wore a neck brace, looking more pathetic than usual, and kept egging Lawler on until he slapped Kaufman, forcing the performance artist to walk off. What was once a small, local wrestling feud went mainstream.

In wrestling, the term of maintaining appearances and portraying staged events as real is known as kayfabe. For years, those working in the industry never broke kayfabe to acknowledge that feuds in wrestling (well, most of them) were pre-determined and set up. The Lawler-Kaufman confrontation was a prime example of that. By committing to his character, Kaufman reinvented himself from a comedian to a great wrestling heel. It made sense that he grew up idolizing his favorite wrestlers and ended up finding a career in it. Method acting and turning himself into a full-time character was basically his dream job.

Kaufman’s entire act was experimental. He wasn’t just striving for intellectual comedy, he transformed his entire life into an act. There is something to be appreciated about the kind of commitment that he had to his craft. Watching video clips of Kaufman, it’s easy to see how different his particular style of performance art was compared to today with Youtube star performers like Logan Paul, who expects to be considered an entertainer, recently gaining notoriety for shitting on other people’s culture.

This is not to say that what Logan Paul does defines where creativity is in today’s world, nor did Kaufman define where it was back then. But to look at Kaufman’s life up close, and to see how entertainment and creative fields are still often ruled by people who diminish themselves to the lowest denominator for the sake of the higher dollar or a claim to fame is discouraging.

There’s an artistry to being performative, but more and more, the performance has become a product. What we produce matters less; now, it’s all about who we’re producing it for. The art of truly losing yourself in your creative pursuit, like Kaufman did, feels like something that may no longer exist, or at least something that fewer people are striving for today. We have people calling themselves storytellers, but have never spun a narrative worth anyone’s attention. YouTubers receive millions of views for simply indulging in the most obnoxious behavior for shock value for people to enjoy vicariously.

Today’s performers appease audiences, whereas Kaufman challenged them. He blurred the lines of reality. He was deliberately unlikable. It made people wonder: was he truly at the zeitgeist of being a performance artist, or was he just someone searching for something, who simply stumbled upon acts and bits that people latched on to? The very fact that those questions are actually asked speaks to Kaufman’s genius.

Kaufman died of lung cancer at the age of 35 in 1984. Because of his reputation, many believed that he faked his own death as one last hoax to complete his act. Carl Reiner once said of Kaufman: “How brilliant a characterization can he do? It’s so full and so clean nobody can see past the edges, where the character begins and he ends.”

While he was alive, his brother Michael once asked him to not let him know whether particular acts were real or not. “Because when people asked me questions,” Michael Kaufman explained, “I didn’t want to lie to them.” It’s perhaps the greatest honor that you could give Kaufman’s performances, that questions linger decades later, long after his death, but there’s also a definitive consensus that he fulfilled the thing he wanted to pursue.

“Nobody can see past the edges, where the character begins and he ends.” -Carl Reiner

Kaufman’s legacy still endures. From Sacha Baron Cohen’s alter-egos, Joaquin Phoenix and James Franco veering into life-as-performance-art territory, the uncomfortable humor of Larry David in Curb Your Enthusiasm, the influx of Hollywood stars who have appeared in the modern day wrestling world; while some influences can be more directed linked to Kaufman, there are traces of what he brought to the comedy and performance art everywhere. 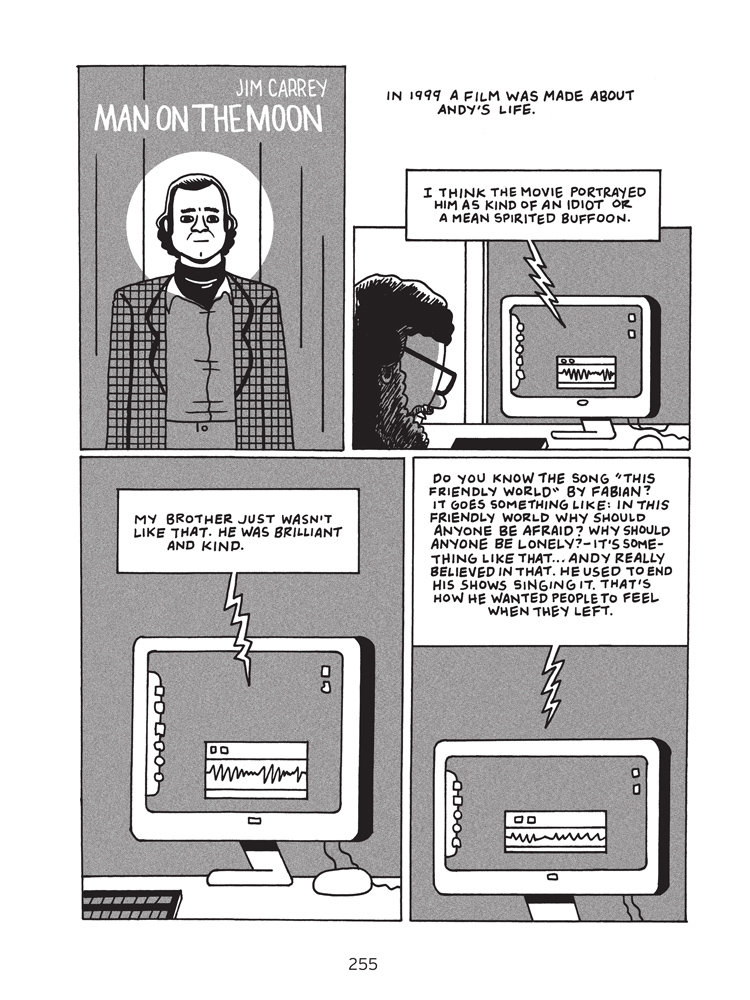 But he never wanted to be considered a comedian. Maybe he was uncomfortable with the term, or maybe, it was because the term itself was too small for the broad scope that Kaufman covered. No one knew exactly who he was, and that was the entire point, a lifetime of committing to a single act of keeping everyone off-kilter.

It brings to mind an anecdote from a profile of Kaufman in a 1981 issue of Rolling Stone. A woman brought Kaufman to her home on their first and only date. Jensen Karp
While mourning the passing of two legends in 2014 – Joan Rivers & Robin Williams – Jensen realized something troubling: He had never seen Don Rickles perform live. This is his essay about heroe... Keep Shouting 'Till They're Listening :: My Interview with Chris Gethard

Jensen Karp
Jensen Karp talks to one of comedy's best kept secrets, Chris Gethard, about the advantages & disadvantages of staying completely DIY, the sacrifices that have to be made to keep his vision pur... The Best Standup Comedy of 2017 Tyler Watamanuk
In the political and social chaos that is 2017, we needed good comedy more than ever. Here's a list of 2017's best things in comedy that might not be found on a more traditional year-end list, like...
HIDE COMMENTS