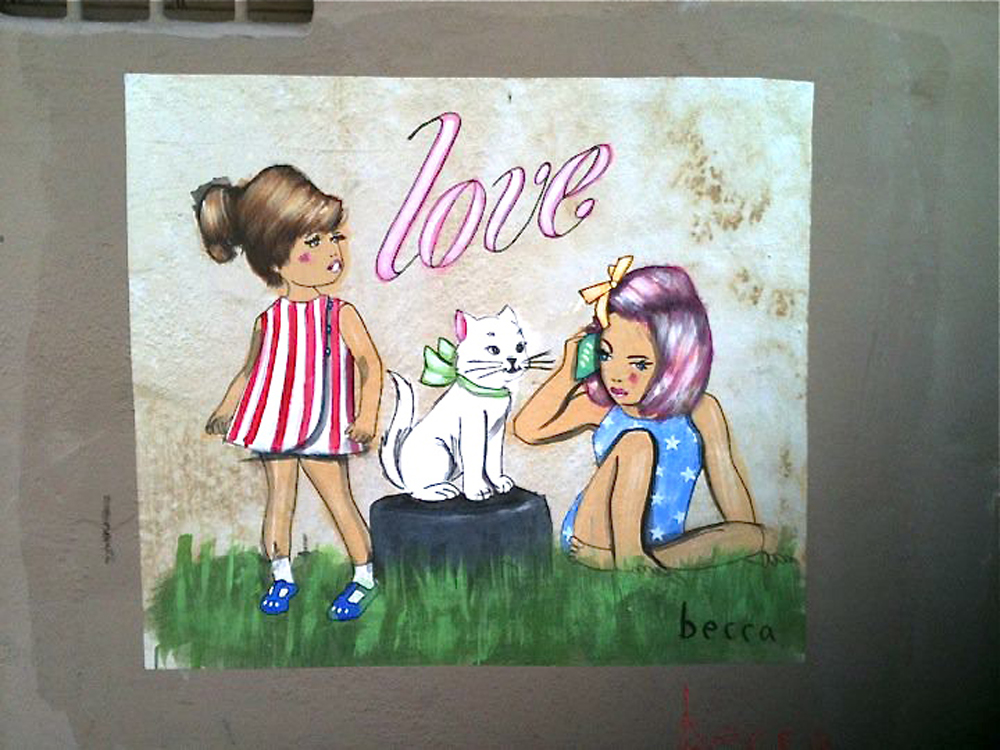 You may have seen a “becca” before. In fact, I’m almost sure of it – especially if you live anywhere near Los Angeles, New York, Miami, or any other major US city. They’re everywhere! She’s everywhere… Becca Midwood’s art, that is. Becca is now stationed in Austin, Texas but has traveled all over the world covering the streets with her whimsical paintings of girls, children, women, cartoons, dolls, and fictional characters. She is a well renowned street artist with a penchant for putting her work up in public places and not being afraid of getting them torn down. There have been many stories and interviews written about the tenacity that Becca possesses as an artist, and the determination she has to put her work up at the same spot even if it was torn down the day before. We caught up with Becca and asked her about what she’s been up to, how she got her start, and what she has planned this year. Read on and see what she has to say!

How did you get your start as an artist?

I always drew and painted growing up, and in college I took some courses. I decided I liked it and my teachers encouraged me to major in art.

What attracted you to street art?

I was living in Richmond, VA attending VCU. This is 1988 – my old boyfriend and I saw some street art, and one of the pieces the artist did was of a guy who had three wishes… So we granted/painted his wishes: two lovers, money and a maid in a spray can. We instantly got hooked and began to paint on the street quite a bit. We began painting on wood and screwing them onto walls around town.

I really care about my paintings and it does hurt when pieces get have a short shelf life on the streets. Especially since they’re one of a kind. That’s the gamble I take going in and every time I go out. It’s definitely worth it in the end.

Where are you currently based? 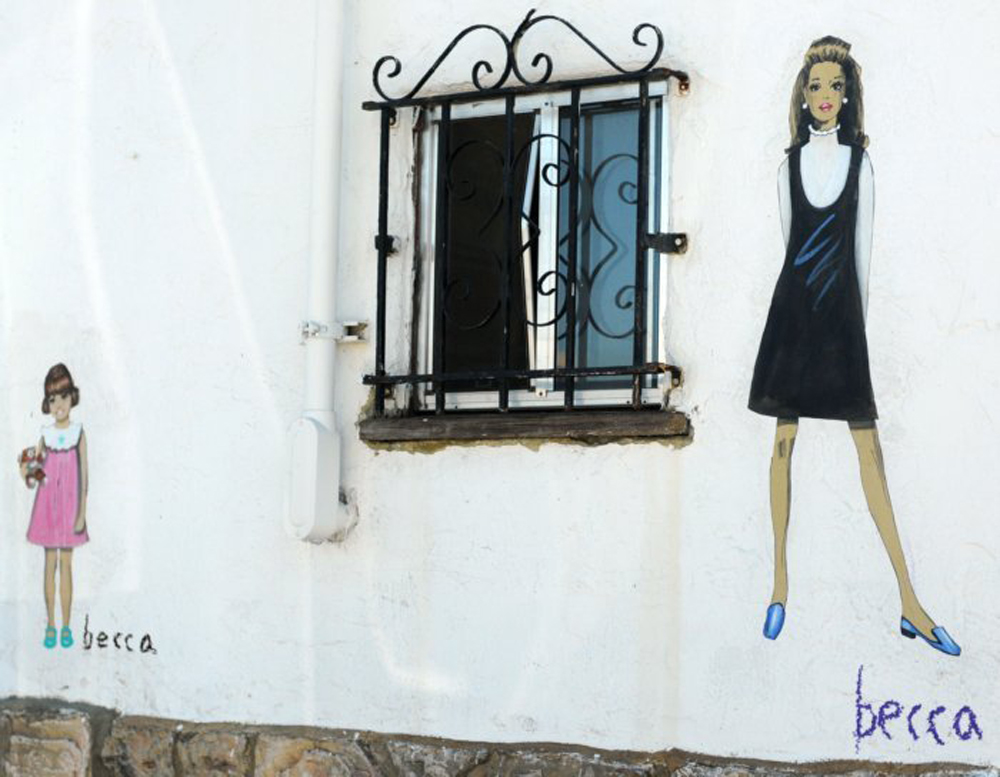 What mediums do you work in?

What are your thoughts on being one of the few female street artists in a generally male dominated field? What reactions have you received? Does it affect what you do?

I don’t think about that. All sorts of reactions.. a lot photograph it, some reach out for a painting, some people steal it. There are many reactions as there are many paintings.

I really care about my paintings and it does hurt when pieces get have a short shelf life on the streets. Especially since they’re one of a kind. That’s the gamble I take going in and every time I go out. It’s definitely worth it in the end.

Where do you draw inspiration for the subjects you portray in your pieces?

I am always looking for images…this is part of what makes it interesting for me.

What is your favorite city to put your pieces up and why? 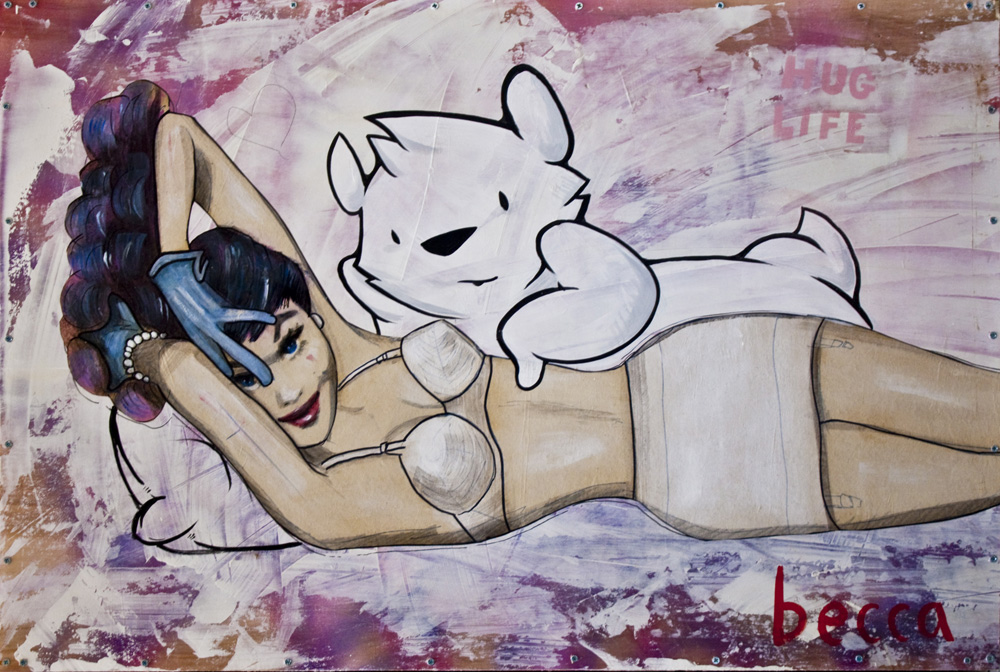 I started to put up my work in LA after the riots. The buildings were burned out and boarded up. I had both corners: Third and LaBrea & Sunset and LaCienega for three years, that was AWESOME. LA’s driving culture provided me with an immediate and a captive audience. I have been working in LA for so long that the streets are like a second home for my work. I have put up work in New York but I find New York doesn’t need any, it is like bringing sand to the beach. I love to put up stuff Richmond,VA. Since i did my 1st piece there it has a big place in my heart. There is a piece I did with two giant black stars that read “grandma Nice” & “Girlfriend Try kill Me.” This piece has been up Richmond for 25 years, they painted out the words, so what.

I have been working in LA for so long that the streets are like a second home for my work. I have put up work in New York but I find New York doesn’t need any, it is like bringing sand to the beach.

What’s the craziest or weirdest thing that you’ve seen or that has happened to you while putting up a piece?

During the 25 years of doing this, nothing remarkably bad has happened to me on the street until recently at Miami Basel street art fair. I was hanging out my friends, model Byrdie Bell & record producer Aqua. We were having a great time looking at all the art, etc. I wanted to put up one of my girls, so I did. Aqua went to do his tag on the wall when out of nowhere a really sweaty, drugged out freak in a business suit came screaming, “this is my building, this is my building!” and tried to attack Aqua. Keep in mind, this is in broad daylight at a street art fair. People were holding him back, he appeared as though he was mad enough to kill. We didn’t want any problems. We got in the car. Then that freak started filming us with his camera and kicking the car, shouting he was going to call the police. To myself, I was thinking, “go ahead and call, you f’n freak, you’re the one whose high as a kite.” But I refrained and I drove off. 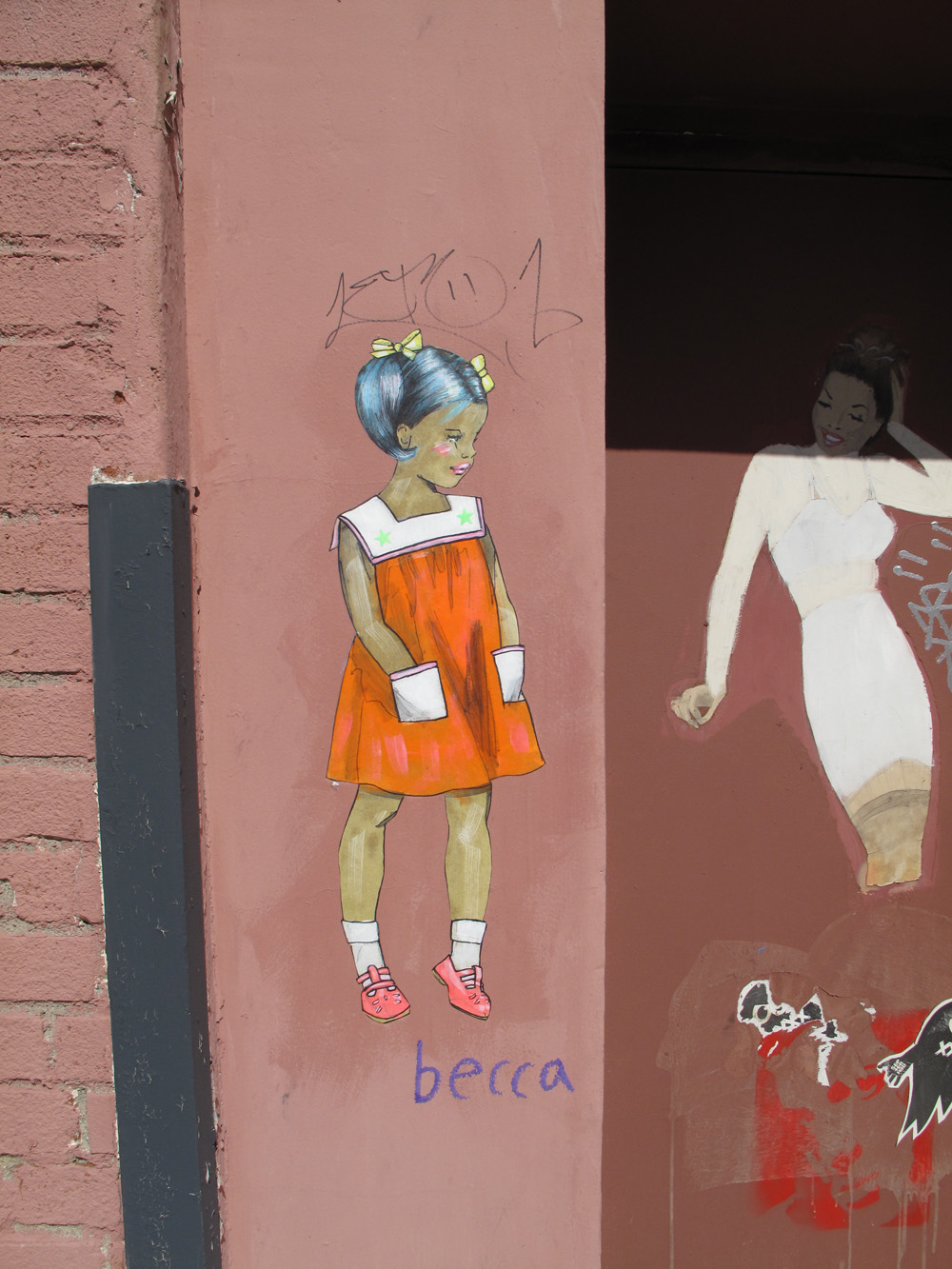 How would you say your work has changed throughout the years?

I have been painting so long, an ineffable and natural evolution has occurred.

How would you differentiate the work that you show in galleries opposed to the work you put up on the street? Are the pieces different?

The pieces on the street have a natural background. I give the same amount of effort to both places. Recently I have started making “pasters” to put up out on the street. Some of them are ten feet tall. For the last 25 years, every street piece I’ve put up has been original.

What’s next for you? Any upcoming plans?Different directions you are taking?

Two shows in the fall. September at the Lab Gallery: Hug Life & Becca Show. We will feature our own work plus several of our collaborations. December at Copro Gallery and most recently, a show at the C.A.V.E. Gallery. I just released five new prints on my website this month.

I have been collaborating with Hug Life/Phil Lumbang for a while now.. I love working Phil. I’ll send him a painting, he does his thing and he really blows my mind with it. Phil has an incredible graphic sensibility he just seems to know how to take an ordinary painting of mine, and give it all this life and character. I’m looking forward to our big show.