For most of mainstream America, the 1995 Larry Clark film, Kids, was absolutely shocking—effectively sounding the alarm for middle class parents who were watching all of their worst teenage parenting nightmares materialize right in front of their eyes. The drugs, the crime, the sex, the skateboarding, the AIDS—it was all there to behold in haunting, graphic detail. The movie starkly exposed the realities of inner-city American life in a way that most of the country would rather pretend didn’t exist, but for the thousands of urban kids viewing, the film’s rawness, realness and relatability to their own life stories packed an unforgettably potent punch.

For Tennessee-born twins Sidney and Thurman Sewell (The ATL Twins), Kids resonated deeply, speaking directly to their experiences growing up as poor teenagers in the South, causing trouble, selling drugs, skateboarding, and everything else that comes with the often unstable and chaotic youth experience of America’s inner cities.

We caught up with Sidney and Thurman in their downtown Atlanta penthouse apartment to find out more about their thoughts on Kids, their lives as adolescents, and their budding careers as actors and artists. 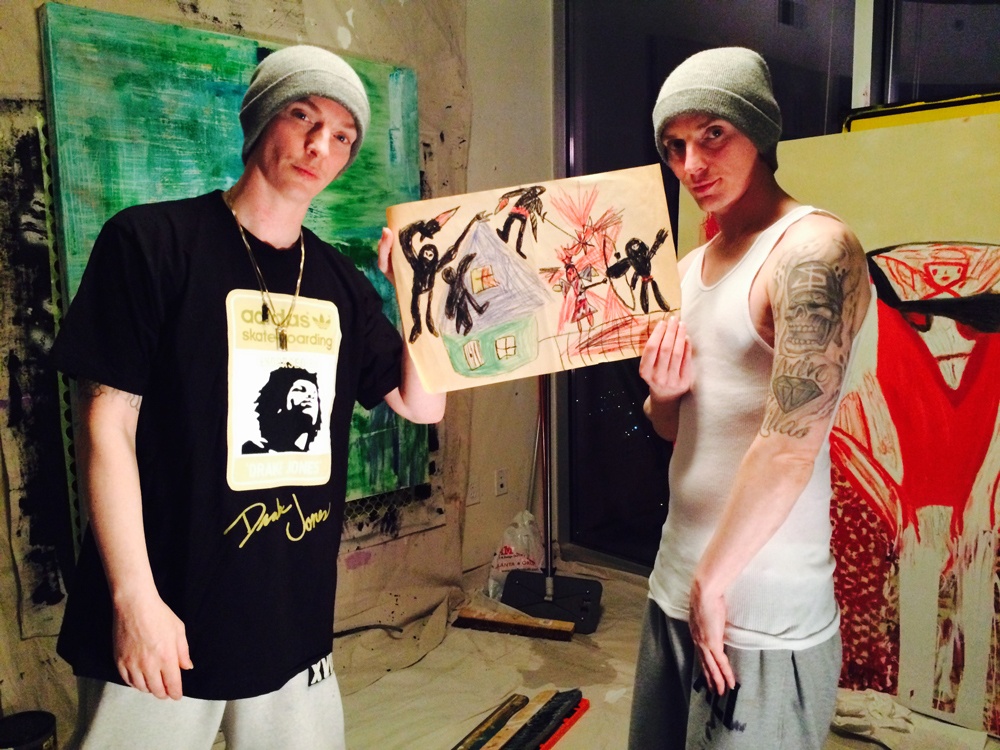 Do you guys remember watching Kids when you were young and comparing the experiences of the characters to your own as skaters growing up? What about as adults looking back on the film? Has anything changed?
We actually watched Kids right when it came out at some shitty independent movie theatre in Knoxville, Tennessee, when we were really young. After we watched it, we were so hyped that there was a movie that actually portrayed our lifestyle. We couldn’t believe how many real skaters were actually in the movie. We were already fans of most of the skaters who were in it—all the East Coast heads from Pulaski and Love Park and all the EMB heads too—it was truly special. As adults looking back, it reminds us of how sacred skating used to be.

It was a subculture that wasn’t known by everybody in the world. It was something that if you knew about, you were cool. There was no social media and you couldn’t Google anything so you had to be down to know. We were in Tennessee, not New York, but it was the same mentality—causing trouble, fucking bitches, and skateboarding.

What, if anything, do you see as the difference between the lives of the Kids characters living in New York City and the experiences you had growing up in the South?
In the South, you get scrutinized a lot worse. Down here, we have crazy rednecks and gangsters who would start shit with you just for how you looked. We quit going to school because we didn’t fit in and we felt like we were on a further level mentally because we skated and hung out with dudes twice our age.

We traveled around to major cities and skated all day and night, so we saw what life was like for real. We would see the craziest things and we were also taught by our older friends what life was all about and what to expect, so we had an advantage over the other normal kids that were our age. We were fucking older women at the age of 13, we were selling drugs at 14, and we lived on our own at 15. We were also very lucky we never got killed in the places we grew up. Somehow we always made everything work out.

I’ve always felt there was something really dark about the South—like there’s this glossy, happy veneer of Southern Hospitality and friendliness there, but underneath, there’s this dark underbelly of bitterness, hate, poverty, and addiction. Having grown up around theses elements can you speak to that a bit?
People can be friendly, inviting, and welcoming, but there is definitely a dark side. The South is a crazy. The truth is there’s a lot of dirty shit going on and it’s really a lot of poor, poverty-stricken people who have a chip on their shoulder because their lives suck. That’s how we grew up, so we can relate. What’s there to be happy about when you live in the ghetto and rely on food stamps to live? Drugs and alcohol is the only answer and we’ve fallen victim to that as well and still do. Life is hard and shit is real out here.

Skateboarding is probably the largest common denominator among many of the early cult fans of Kids. How has skateboarding and growing up in the city affected your identities?
Honestly we wouldn’t know anything about life without skateboarding. Skateboarding is everything. We love it so much that we hate it and we hate seeing it get raped by the same people that made fun of us for doing it when we were younger. We’ve come to respect all types of skateboarding now, but back in the day, we were always all about street skating. We hated skateparks and we still do. It’s very artificial to us. It’s like wearing a condom—it’s hard to feel.

In almost all of his work, Harmony Korine seems to have an incredible ability to capture the grittiness, darkness, and sometimes hard-to-watch elements of adolescence. In having worked with him, where do you think his knack for capturing reality so convincingly comes from?
Harmony captured the culture of skateboarding perfectly because he is a skateboarder. He understands the real culture of it and casted real skaters to be a part of it. It’s crazy looking back because we’re now good friends with a lot of the original cast of Kids.

Harmony is really smart and he understands it all very deeply. He makes movies about controversial things that the world views as shocking and just puts it out there. To us and everyone who grew up skateboarding and on the streets, this shit is normal to see, but to general society, they see it as crazy and appalling. Harmony is the ultimate hustler. Harold Hunter said that about him and we couldn’t agree more. He’s got a magical gift. He’s a folklore hero and a gangster disciple. 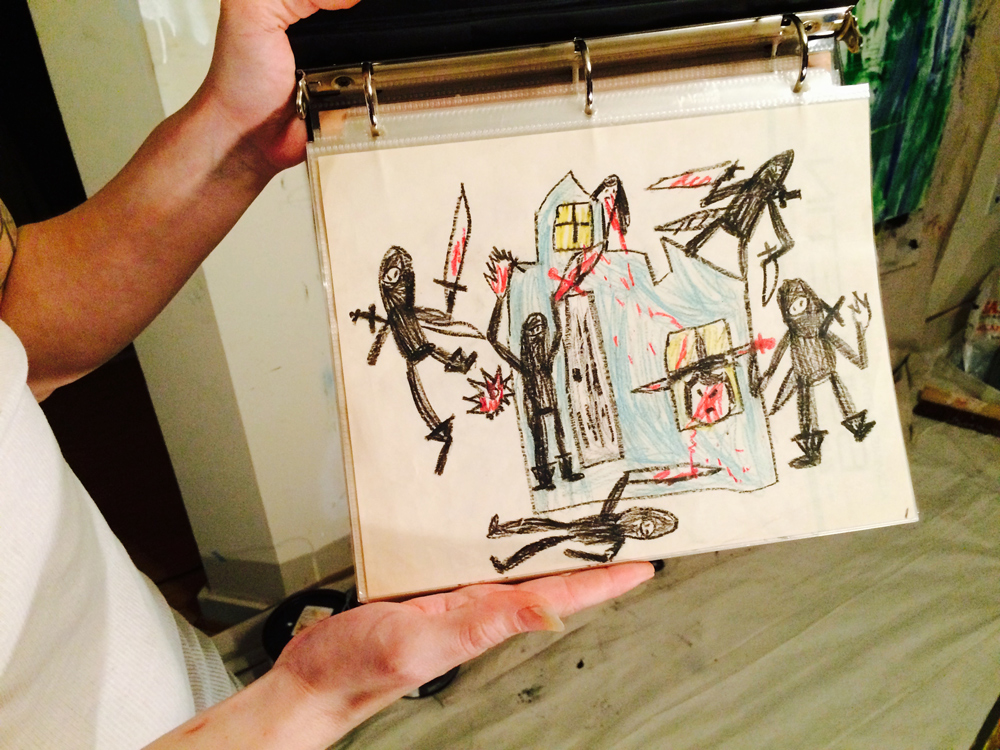 Another found childhood drawing by the twins.

There definitely seems to be pretty dark element to who you guys are and the lifestyles you portray on film doesn’t seem to be too far off from how you actually are in real life. Is that fair to say?
We grew up in a way that only a few will understand and it opened our eyes up to some gnarly ass shit which affected our brains, but we’re definitely very driven and have a strong work ethic. We really do all the things people think we do, but we only show about ten percent of who we really are.

Let’s talk a bit about your recent work with oil paints and canvas. There’s definitely disturbing imagery featured in some of your work. Where does that come from and how did you guys take up painting? It doesn’t seem like something you’d just randomly get into, right? Was there something that sparked it?
We used to skate all day every day, and now that we’ve gotten older, we don’t really have the time to go out and skate like we used to. We still follow it closely and all of our friends still skate so were very much involved, but over the last couple of years, we’ve felt like there was a void in our lives. Then we came across a mystical guy named The Devil that told us that we are artists and that we needed to start painting immediately. So randomly the next day, our mother brought over all of our childhood drawings which we had no idea existed.

When we started going through them, we couldn’t believe how gnarly they were. Most of them featured all types of scary, demonic, and creepy shit that most three year olds wouldn’t be painting. After seeing all of these old drawings, we felt inspired to recreate them. So we started painting and we haven’t stopped since. We were recently asked to do an exhibition in New York during fashion week at Harif Guzman’s studio in Soho. So we had a show that was open for two nights and it was amazing—over capacity both nights with a great response. It really inspired us and now, we’re constantly painting everyday all day. 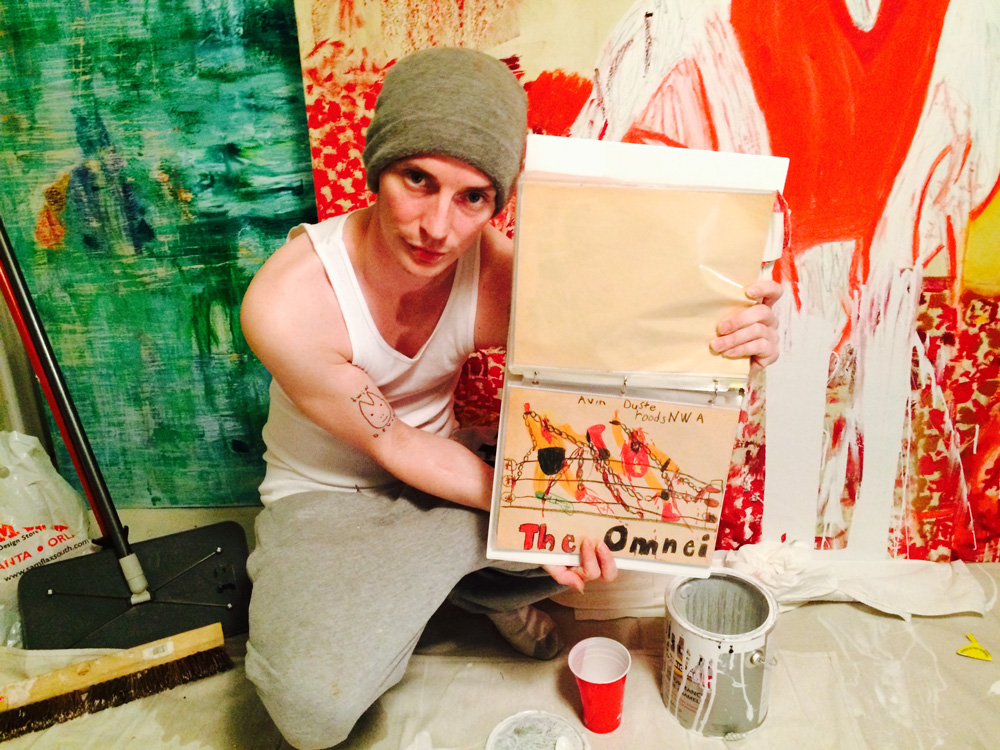 What’s on the horizon for the two of you? Any big plans coming up?
We’re going to create a video installation with photos and start sending them around to some galleries and to some artists we’re friends with. We’re also making a movie out of all the debauchery and crazy footage we’ve acquired while being in Hollywood. We’ve been slowly editing it for the last year and it’s gonna be the gnarliest shit ever.

Alec Banks
I suppose when I first started writing about fashion some years back for Hypebeast, it felt like a totally foreign world despite wearing the same clothes and being influenced from the same bouts of... Seb Carayol
A picture-perfect tale of hometown non-pride at its finest, Seb asks Ben Raemers how the hell you become a pro skater when you come from a town that seems to be a seaside version of Guy Ritchie's m...

Yasi Salek
"[Photographer] Alexis has a knack for not only capturing compelling scenes, but also conveying a sensory experience, be it the electricity of kids at a punk show or the sensual lethargy of girls h...
HIDE COMMENTS