We’ve been in talks here at The Hundreds HQ in the stuffy editorial room – of doing a series where we visit all the weird little corners, haunts, and dives of LA. Mac came up with the idea. He felt like the notion of “LA destinations” has been bruised what with Yelp culture and the plethora of ever-hyped next-next new-new restaurants and such that bogart all the coverage. He wanted to give strange fringe locales like the abandoned amusement park near the Death Valley, Hollywood’s Museum of Death, and the Bronson Canyon batcave some love. He called it OBSCURE LA.

Alina Nguyen: When I think of other large cities, I think of urban whimsy and the romanticization of small spaces. In LA, it’s… confusing. Claustrophobic and disjointed. It’s distinct – the way we move through space here. It’s like nothing leaves a mark. I feel like the air closes in behind you when you pass through as if you were never there to begin with. The awareness of constant and pressing failure feels stronger to me here than it does anywhere else.

That’s why LA, to me, is… the way Downtown looks between 1-2pm on a weekend. All the attempts at “development” slow, yet quick to start. Moving, yet unmoving. LA is Lotus Lounge, the filthiest dive bar in East Hollywood with a towel for a door and one person inside posted up in front of the jukebox at 5pm drinking sake out of a dirty bowl like it was poppin’. LA is all ages punk venues where the unofficial security guard posted up outside is a homeless man from Skid Row. LA in my eyes will always be absurd.

This series will be an exploration into the obscure corners and bends of LA that intrigue us. In this first installment, Mac suggested that we hit up the Los Feliz Murder Mansion. I went alone a few weeks ago, on a day where the air felt particularly still. I brought a camera my uncle bought for me (I am no photographer!) and this is what I found: 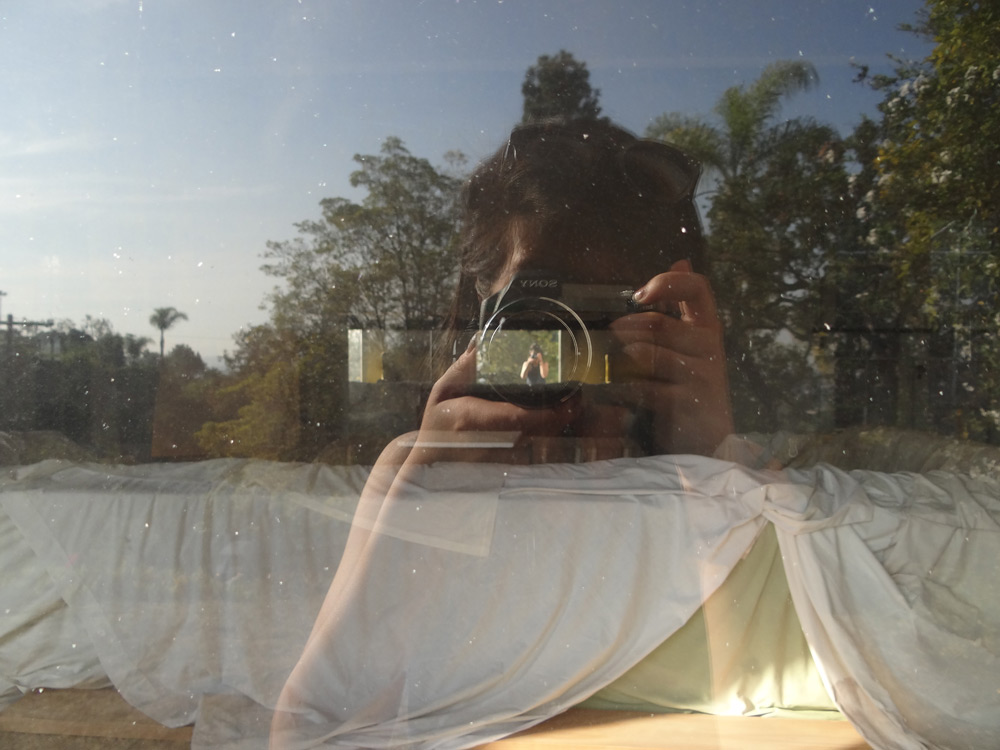 The walk up the hill to the house. 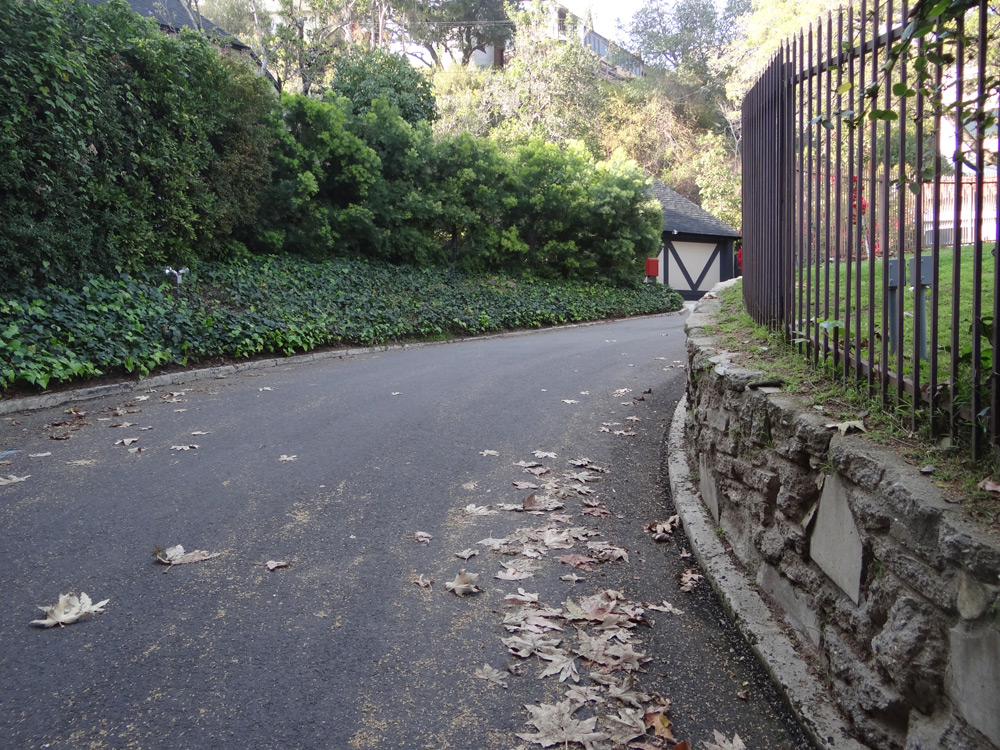 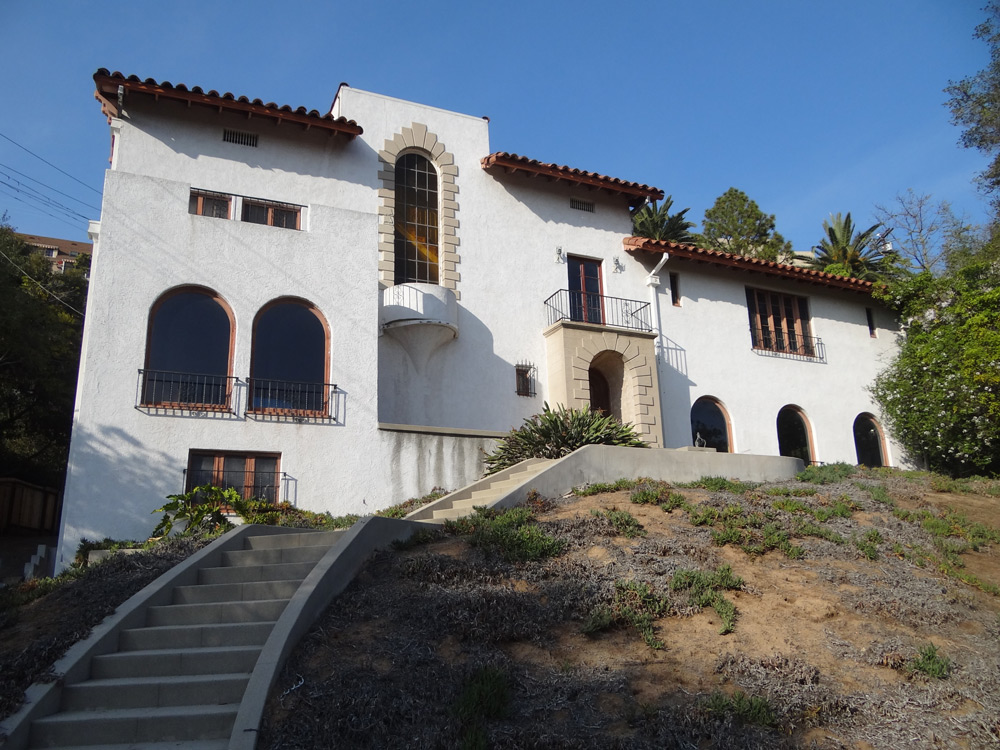 The abbreviated backstory here is that a double murder-suicide took place in the mansion in December of 1959. Dr. Harold Perelson bludgeoned his wife to death, beat his daughter, then downed a cup of acid, killing himself. A couple by the name of Enriquez bought the mansion in 1960 and kept it intact and untouched ever since. UNTOUCHED, meaning the Christmas tree and still-wrapped presents are still lying in the backroom of the mansion, next to scraps of festive wrapping. The couple apparently used the property only for excess storage and now that their son Rudy has inherited the house, he allegedly stops by only to feed cats that he keeps there. I didn’t see any cats or any sign of recent living there.

The injured Perelson daughter got away safely, along with her brother and sister. Now the mansion sits there static and decrepit. There’s rumors of it being haunted, obviously – a woman once entered the house and left after setting off the alarm, thinking lightly of the experience until she realized she had been bitten by a black widow.

Apparently prostitutes used to break in and sleep in the mansion before they installed a security system. Check out the door below with obvious signs of past break-ins. 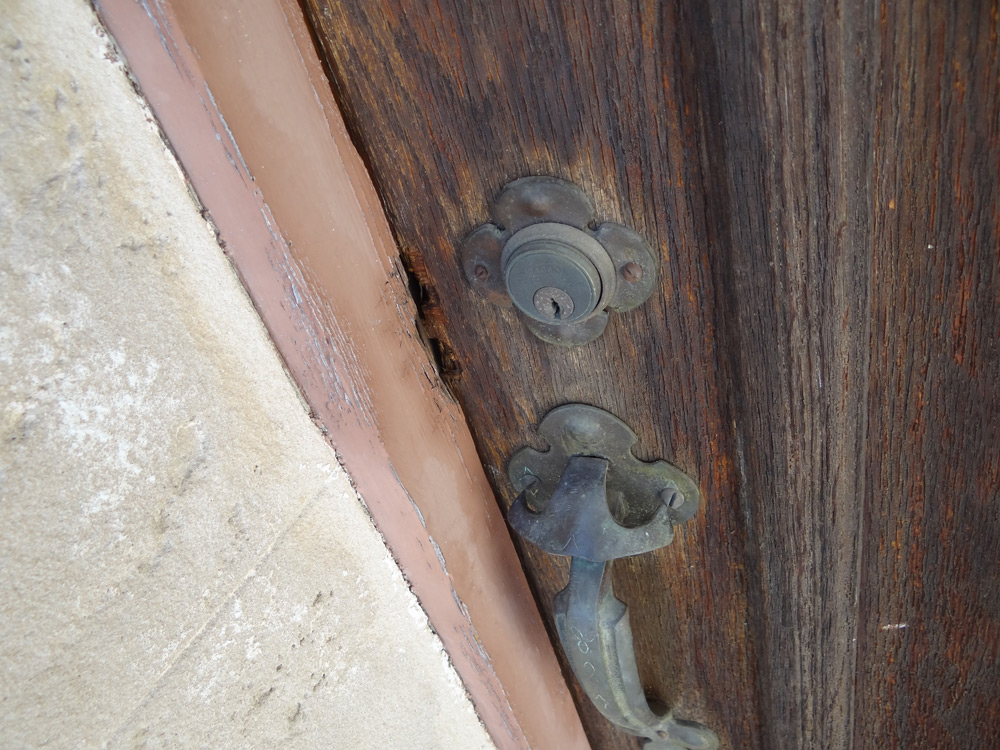 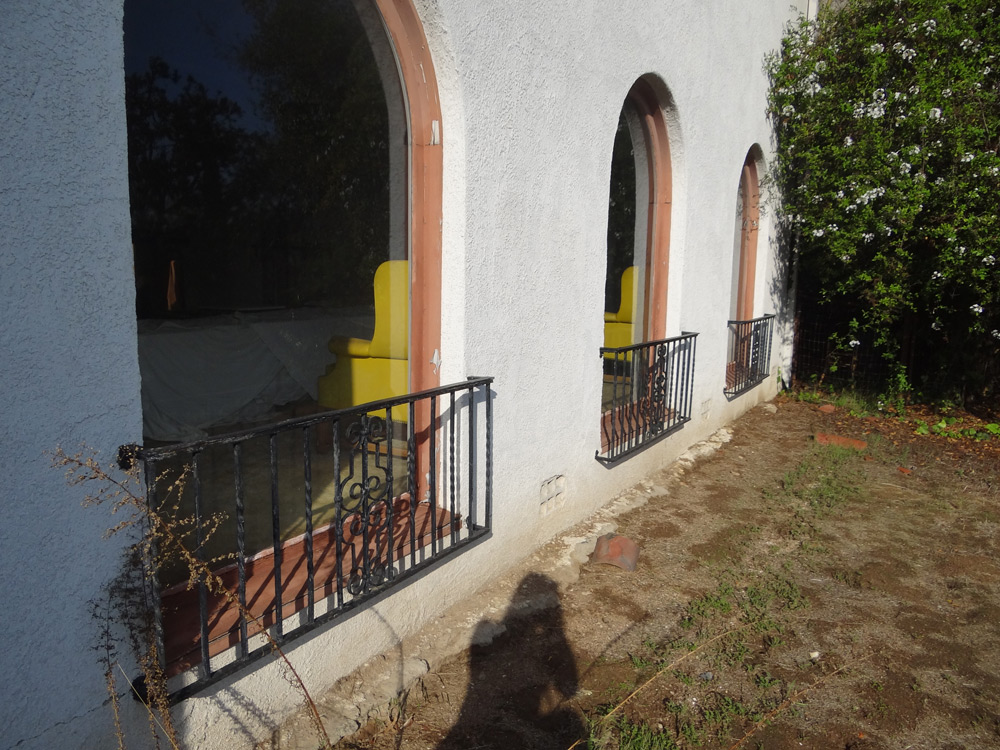 I felt paranoid there. Crass and voyeuristic. Everything I shot had to be through the dusty windows, so I left the place with soiled palms and wrists – I even had dirt on my face from peering through the barred windows downstairs. It was all too appropriate. It simply didn’t feel right to be “touching” the “untouched.” In this blog post on the mansion, the author mentions twice that she feels “voyeuristic and dirty” using other trespassers’ photos who broke into the place.

When I got home to do further research on the mansion, I realized that some of my pictures have the same exact angles as the pictures in this other weird blog’s post. Literally, through the same exact windows, with the same lighting, of the same subjects. On top of that, this LA Times article from 2009 seems to be the only meager source of semi-concrete info on the place, so every other blog that’s covered the story all cite that same article.

I kept thinking about the idea of the “most photographed barn in America” (read it here) from Don Delillo’s White Noise. In the scene, Murray and the protagonist visit this tourist attraction that’s basically, the most photographed barn in America. Murray says, “No one sees the barn… Once you’ve seen the signs about the barn, it becomes impossible to see the barn.” Then later, “We only see what the others see. The thousands who were here in the past, those who will come in the future. We’ve agreed to be a part of a collective perception. It literally colors our vision. A religious experience, in a way, like all tourism.”

My experience of the mansion felt colored by the previous visitors – my photos themselves, affected by the previous pictures taken there. I’ve felt similarly visiting places like the Grand Canyon and taking shitty photos. And Vegas. Destinations that have become more like weighted concepts.

Admittedly, I was initially a bit upset and felt like I wasn’t capturing anything “unique” with my pictures and story on the Murder Mansion. It later felt selfish to think that way. Once we, as visitors, are present in these loaded touristy locations, how unique is our experience anymore? How singular is our perception? 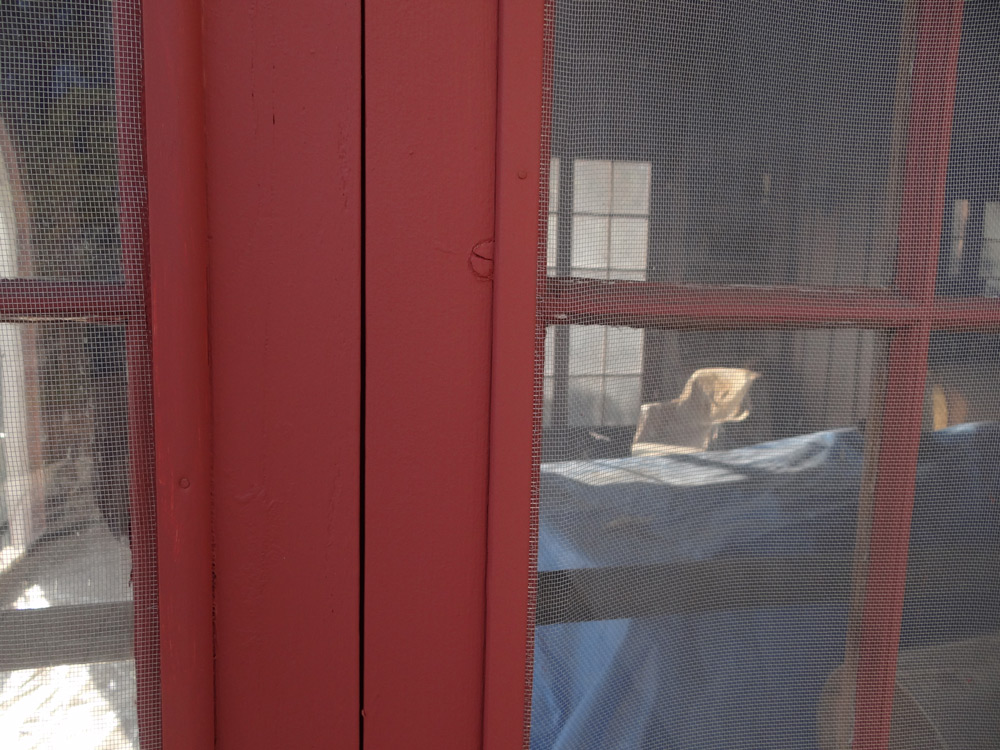 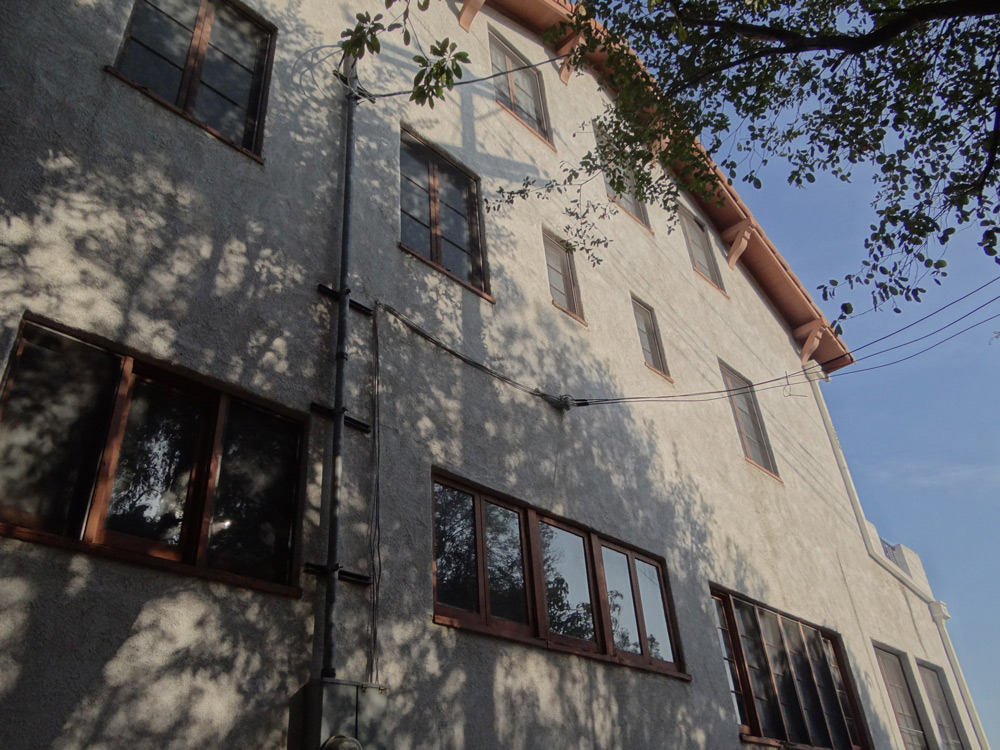 The back of the house. There was a red truck parked back here – I think the owners still have gardeners taking care of the mansion’s external upkeep. 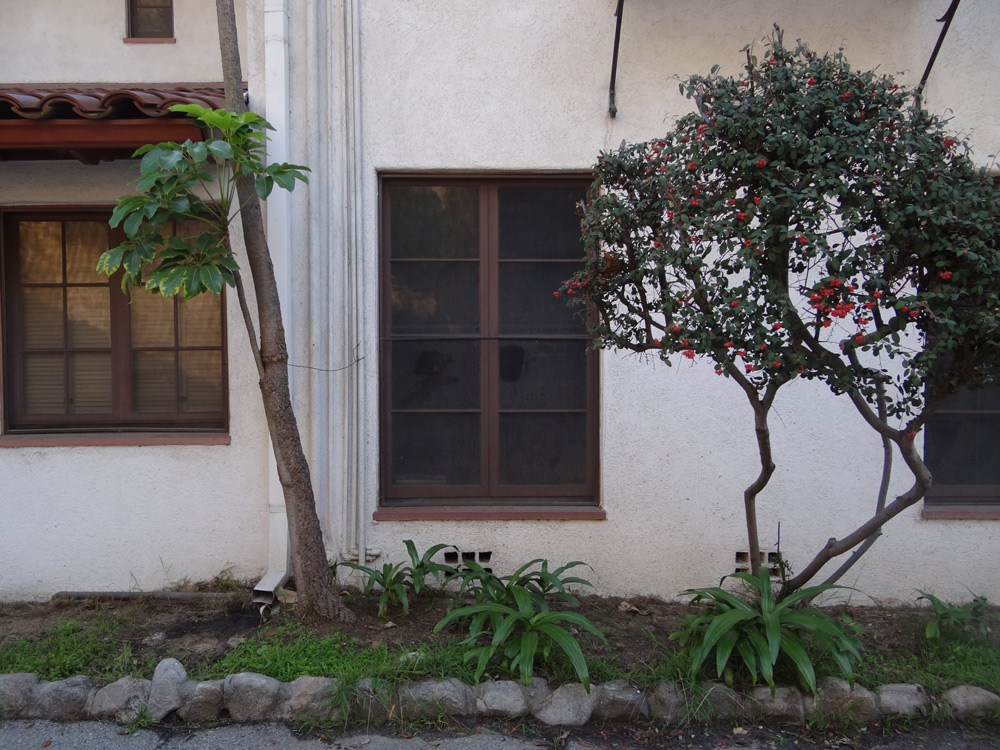 A close up of that same back window, with what looks like a handprint from the inside and a circlular face-looking print. This scared the shit out of me. 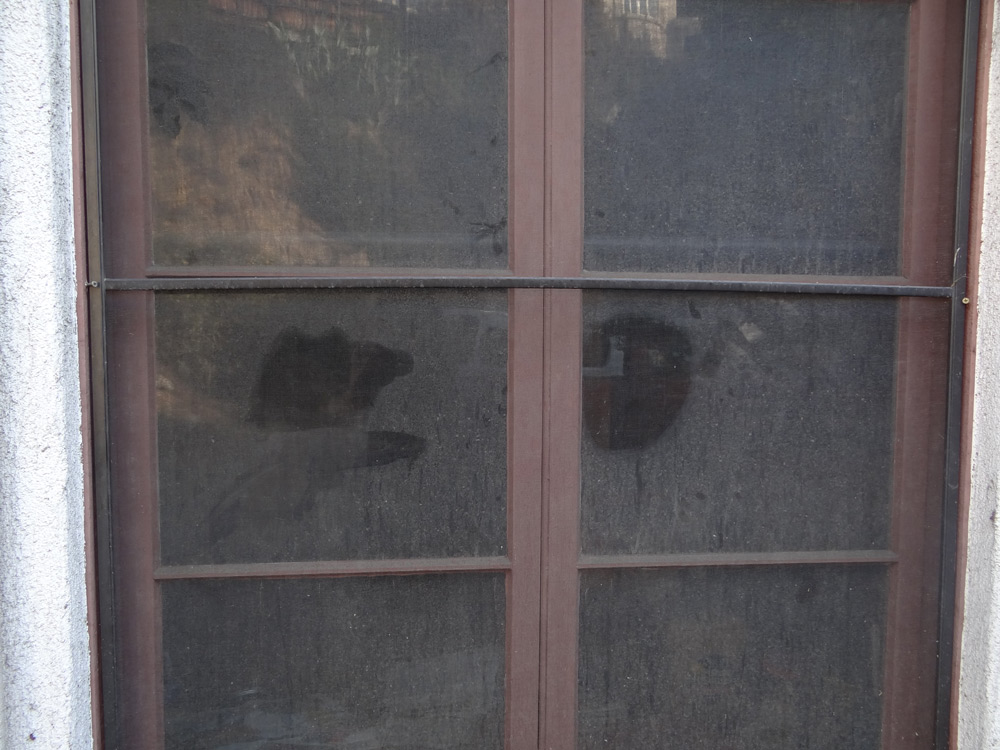 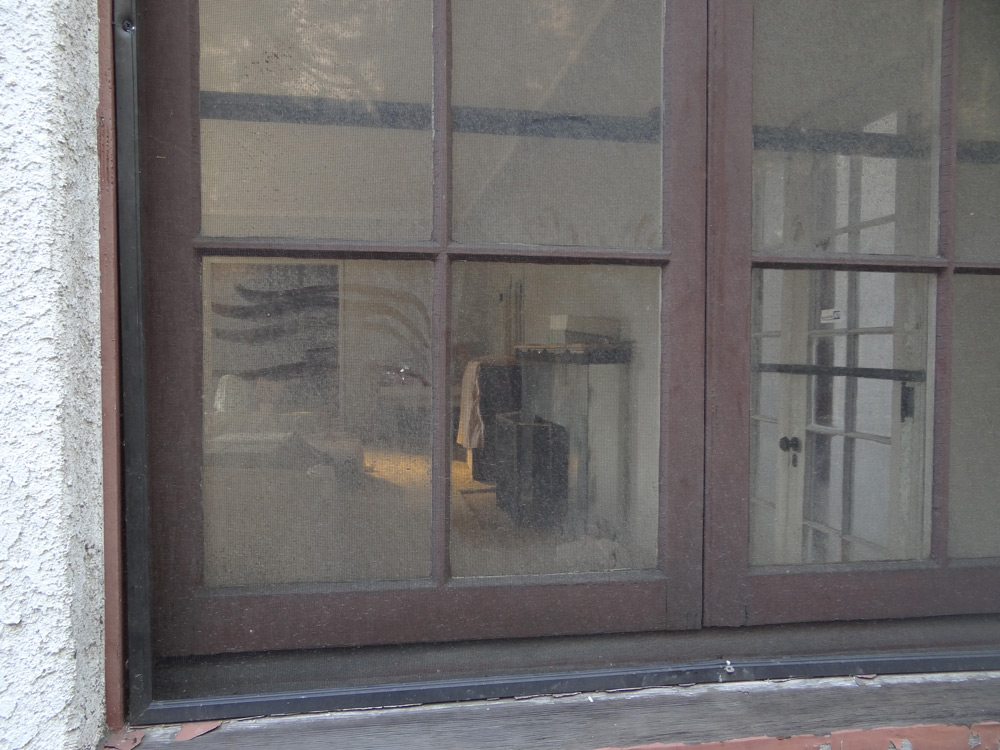 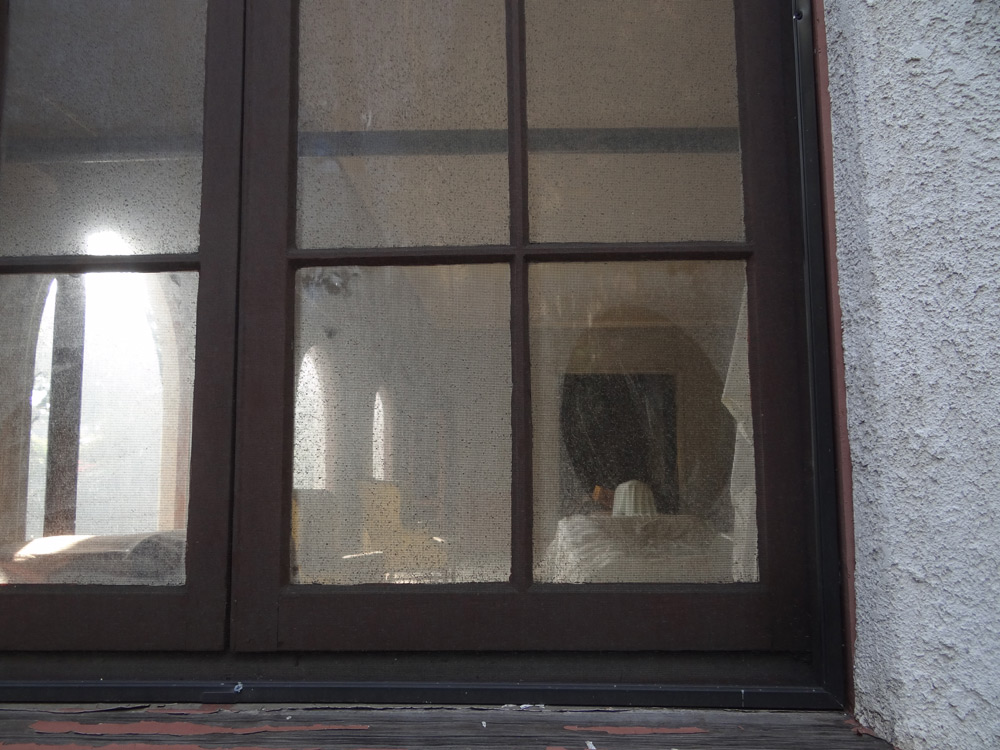 Clearly, previous visitors have tried to break in through this screened side door. My hand fit easily inside the tear, but they’ve reinforced the lock… not that I was trying to enter or anything… 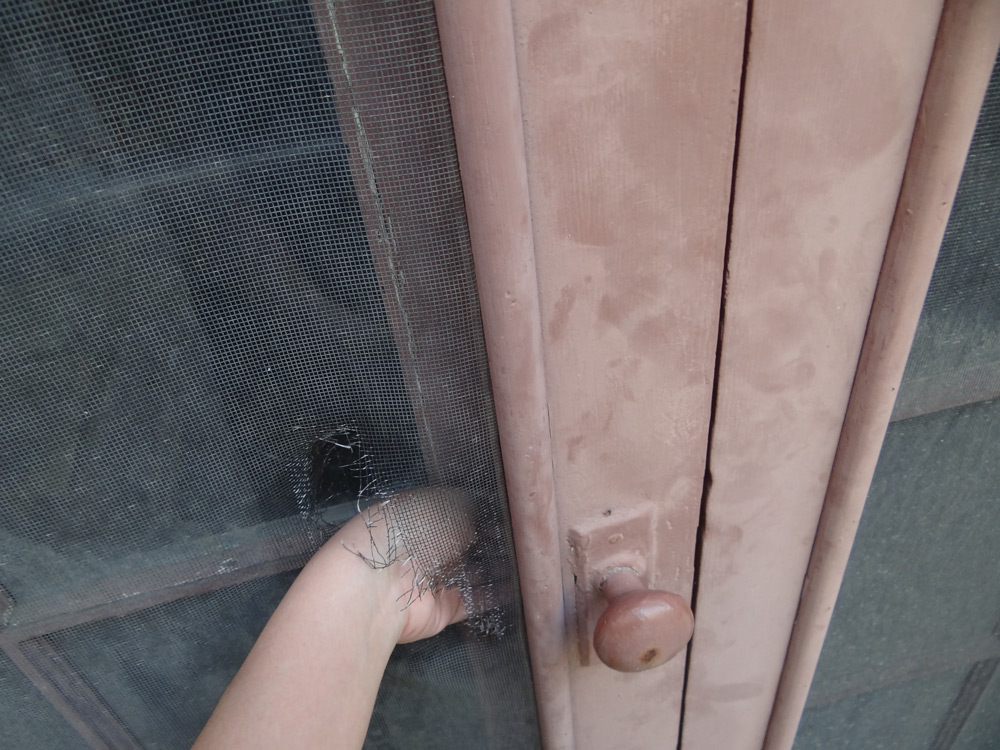 Shots from through the tear in the screen that look almost-identical to shots from this post. Note the Christmas wrapping. 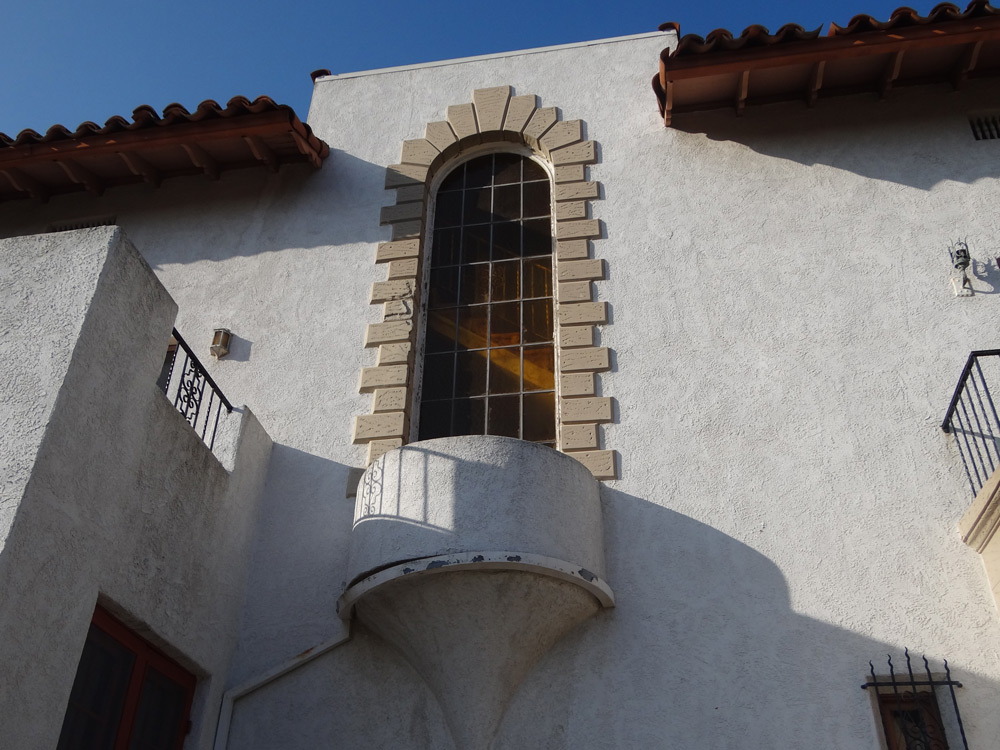 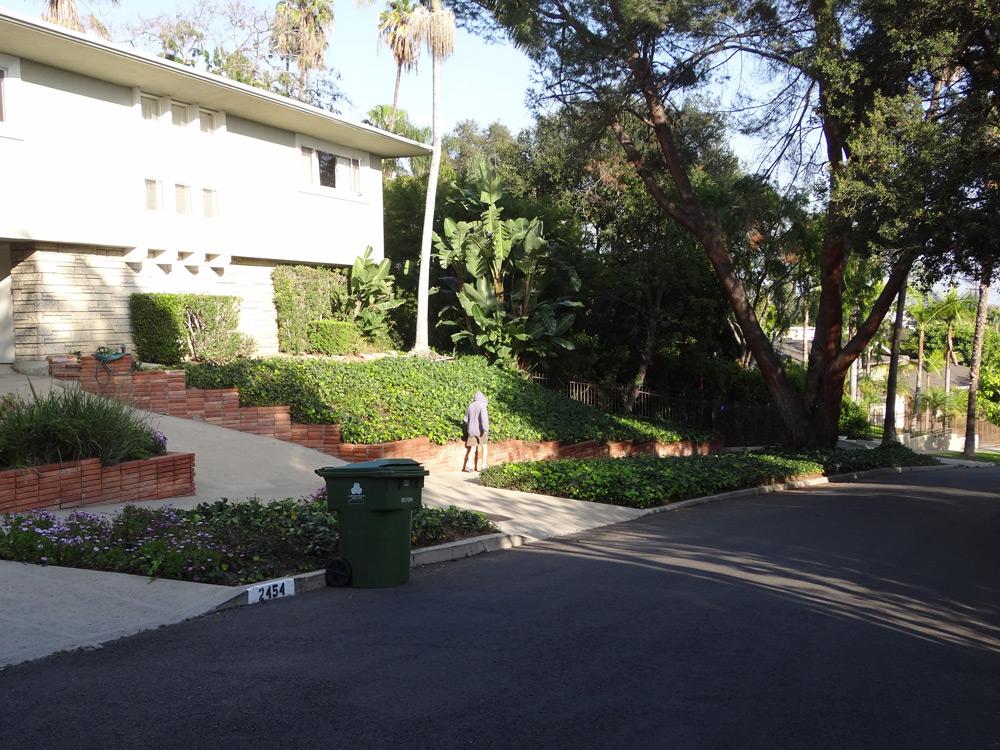 Extra tidbit: Behind the mansion further up the hill is Frank Lloyd Wright’s Ennis House, designed with interlocking concrete blocks to look like a Mayan temple. It’s HUGE – I’ve driven by it before coming downhill from the Observatory. It’s been used in film production from Blade Runner to B-movie horror flick House on Haunted Hill. My favorite: the doorframe to Club Silencio in David Lynch’s Mulholland Drive uses tile casts from the Ennis House’s block ornamentation. 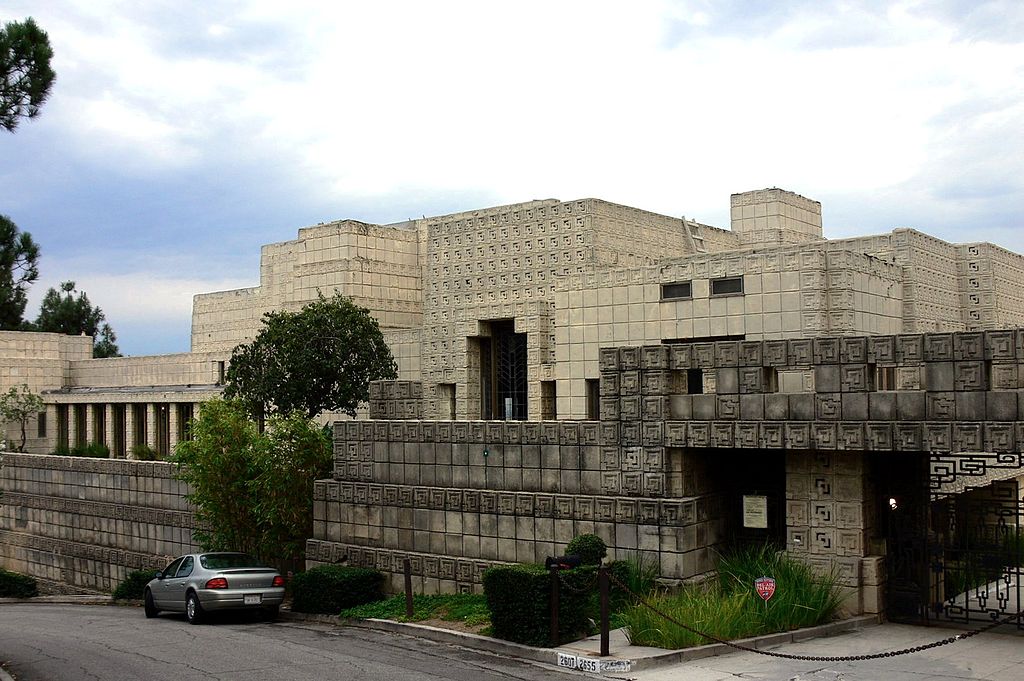