This Friday morning at 11:00am, we will begin selling the Versus x The Hundreds “Job Hopper” t-shirt. This shirt is only being sold at Versus and our Store on Rosewood. Only 144 of these t-shirts were made. Both stores will have the black colorway, but Versus will also have a White and Athletic Heather Grey, while we wil have our own exclusive Caribbean Blue colorway.

To shed some light on this special project, and to introduce you to Versus (aka Us Versus Them), we caught up with Graham. Read more to learn about marmalade, enlightening the suburbanite community, and the demise of streetwear. 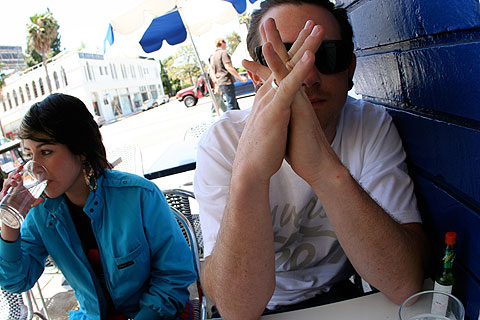 Graham: I just looked up what Vegimite is made of. ItÃƒ¢Ã‚â‚¬Ã‚â„¢s YEAST JELLY.

Me: What exactly makes something jelly?

Well, itÃƒ¢Ã‚â‚¬Ã‚â„¢s a spread. You want the difference between a jelly and a jam?

Jam is made with whole fruit thatÃƒ¢Ã‚â‚¬Ã‚â„¢s smashed, mixed with water and sugar, then heated to activate the natural preservatives in the fruit. Jelly is the same thing, but the fruit pulp is filtered out.

So what’s apple butter? And what is marmalade identified as?

Sure, why not. Alright alright, so you want to talk about the t-shirt?

I think the t-shirt can speak for itself, but if you think it needs explaining, I can.

Actually let’s rewind for a second. Let’s talk about why you’re actually doing t-shirts to begin with. In fact, let’s take it back even further to what you’re doing with Versus out in the land of milk and honey, Temecula, California.

Because suburbs are by default, cultural wastelands. ItÃƒ¢Ã‚â‚¬Ã‚â„¢s easy to find a location in a yet-to-be-gentrified area in a city’s core, gut it, and put in a boutique. But because we both grew up in Temecula, this was something we always wished we had in our neighborhood when we were younger. ThatÃƒ¢Ã‚â‚¬Ã‚â„¢s why we decided to dedicate half the store to showing art and nothing else. Too many people forget where they come from. They move to a city and claim it like they were born there. Which is all well and good, but itÃƒ¢Ã‚â‚¬Ã‚â„¢s easy to talk shit on a place you grew up at because it sucked. ItÃƒ¢Ã‚â‚¬Ã‚â„¢s more of a challenge to go BACK there once youÃƒ¢Ã‚â‚¬Ã‚â„¢ve experienced life in a city and try to build something that is completely at odds with the surrounding community.

ItÃƒ¢Ã‚â‚¬Ã‚â„¢s just that we’re proud of where we came from because if we didnÃƒ¢Ã‚â‚¬Ã‚â„¢t grow up here, we would have never been driven to be individuals instead of following the throngs of Abercrombie clones and mall shoppers.

On that note, why venture into t-shirts and hoodies? Why now?

There isnÃƒ¢Ã‚â‚¬Ã‚â„¢t really any premeditation behind the timing. ItÃƒ¢Ã‚â‚¬Ã‚â„¢s always been an intention to build the store into a brand. Whether itÃƒ¢Ã‚â‚¬Ã‚â„¢s making art or music, I always have a drive to create things and branding is no different. I started creating designs for the shop in December of Ãƒ¢Ã‚â‚¬Ã‚â„¢05Ãƒ¢Ã‚â‚¬Ã‚¦ I finally got my shit together this year and we got around to printing everything. We just wanted to make a line that wasnÃƒ¢Ã‚â‚¬Ã‚â„¢t pandering to the lowest common denominator. 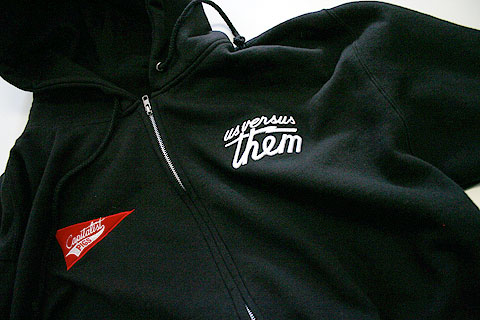 I wanted everything we did to be the best we could do, and to have itÃƒ¢Ã‚â‚¬Ã‚â„¢s own identity as a group. Everyone involved in the store does their own thing and brings their own abilities and talents to the mix. I wanted the line to reflect that. Plus, I felt that there were too many people passing off no-thought designs and there needed to be a push back.

Well going off that, you’re obviously aware of how oversaturated the graphic t-shirt market is, so how do you expect to reach the kids? Are you even concerned with that?

Well being that we can sell the shirts in our own store, itÃƒ¢Ã‚â‚¬Ã‚â„¢s a bit more of a safety net than most kids have nowadays, trying to start brands up. ItÃƒ¢Ã‚â‚¬Ã‚â„¢s CRAZY how many people are trying to start tee lines. I think the main problem is that a lot of kids are just trying to emulate brands they are into, rather than coming up with their own identity and direction. And it doesnÃƒ¢Ã‚â‚¬Ã‚â„¢t have to come from fake posturing and pandering to certain “scenes” like skateboarding or cycling. 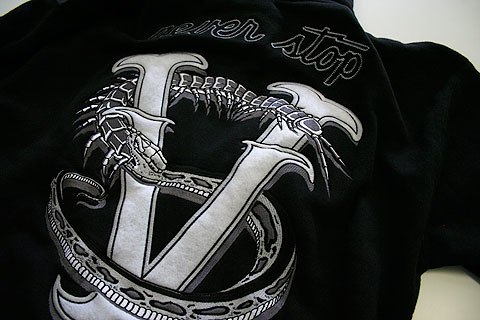 So when you have 100 brands that all look the same, it gets a bit stale, and people get tired of looking at it. Just look at “streetwear” in the past year. HUGE growth, and a looming crash on the horizon. Why? Because too many people jumped on trends to make the fast cash and sacrificed their identities and creativity.

Isn’t that the normal business cycle of any rapidly-growing industry?

So speaking of streetwear’s impending doom, what’s the story behind our t-shirt together? 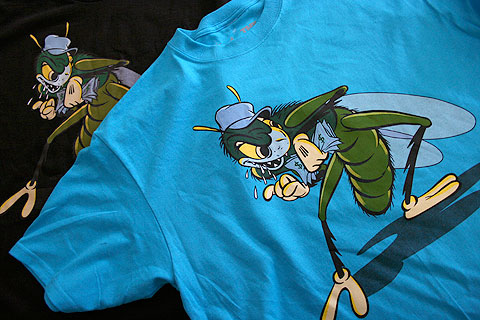 Besides the fact that we’re both Disney nerds? The character was originally used in WW2 propaganda posters that Walt Disney had done for the government. He had done a lot of stuff like this, including bomber squadron patches and the infamous WW2 cartoons. The original intention of the graphic was to present people (who went from job to job looking for better pay) in a negative light because it brought down the productivity of the war effort.

When I use something that wasnÃƒ¢Ã‚â‚¬Ã‚â„¢t originally something I created, I try to attach some sort of irony or sarcasm to it, in a similar manner that pop artists of the 50’s and 60’s did with found objects and advertisements. 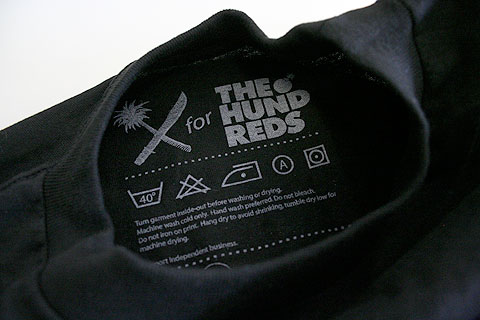 The focal point of Us Versus Them is the relationship between the starving artist and the Corporate interest. And felt that the character could be flipped to represent the attitudes of most large businesses, which is to follow trends into subcultures, which are then raped of maximum profit and left to implode.

Ãƒ¢Ã‚â‚¬Ã‚Å“Take the money and runÃƒ¢Ã‚â‚¬? is the creed of anyone who is looking out more for themselves and not their community. But at the same time, if a kid wants to take it differently and likes the shirt just because it looks cool, IÃƒ¢Ã‚â‚¬Ã‚â„¢m all for it. ThereÃƒ¢Ã‚â‚¬Ã‚â„¢s nothing worse than an ugly shirt with a message. 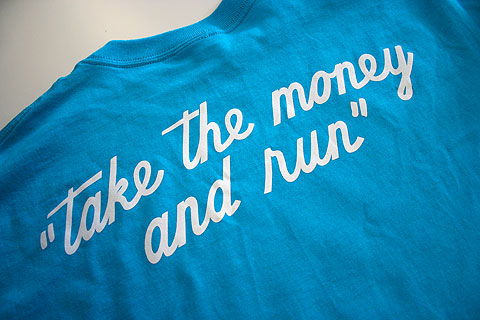 What about good-looking shirts without messages? Those are a bit worse, I’d say.

Depends on what you feel fashion is for. ItÃƒ¢Ã‚â‚¬Ã‚â„¢s whatever you want it to be, but at its core, itÃƒ¢Ã‚â‚¬Ã‚â„¢s all about aesthetics. Not everyone wants to be preachy with their clothes, but IÃƒ¢Ã‚â‚¬Ã‚â„¢d have to say 99% of people buy clothes because they like how they look in it.

Fashion is all about sex when you get down to it, so you canÃƒ¢Ã‚â‚¬Ã‚â„¢t escape the aesthetic aspect of it. EveryoneÃƒ¢Ã‚â‚¬Ã‚â„¢s always dressing to get laid and it fuels almost every trend… except all that shit that goes on in WDYWT threads… which IÃƒ¢Ã‚â‚¬Ã‚â„¢m not even going to get into.

I think that does a good job of getting us up to date. Any last words?

After school special time: Support your peers, support people who are trying to make it on their own, and make sure you stay humble because thereÃƒ¢Ã‚â‚¬Ã‚â„¢s always someone cooler than you.

But never accept fake bullshit. Wow, that sounded so lame. Haha
I cant believe I just said that.