Hope you had a chance to stop by the 5TH pop-up shop/gallery this past weekend (If not, the store re-opens on Friday morning). Most of you that’ve dropped in have discovered that one of the racks is entirely dedicated to vintage The Hundreds t-shirts from the past 5 years.

For example, “Streets Runner,” which droped several years ago but is pretty appropriate now considering our ascent to the Street Fighter renaissance. We were just talking about that whole arcade craze back in the day with this game. I think it was the first, and perhaps last, time that liquor stores were the cool place to hang out. How many of you ditched half of your schoolday to work on wicked combos? Placing your quarter on the window to call NEXT, complaining about chumpy cheat moves, and (if you were like me) using Zangief or Chun Li because you couldn’t quite master the left-down-right dealyo. 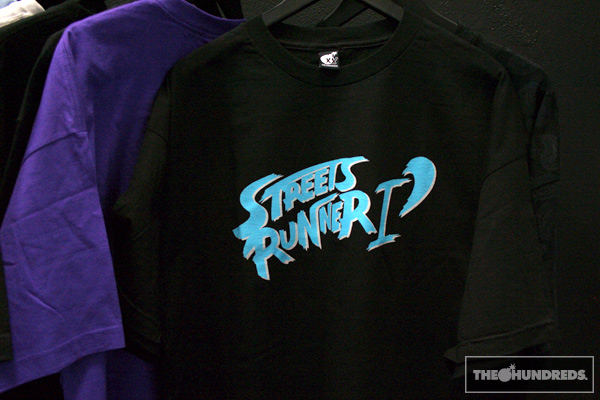 Back when Ben and I worked on The Hundreds by ourselves in a stuffy studio apartment, our lunch breaks would be spent on Venice Blvd. at the local taco truck. Some of the greatest carne asada burritos in this town are waiting for you in the back of a rusty white van. Trust. 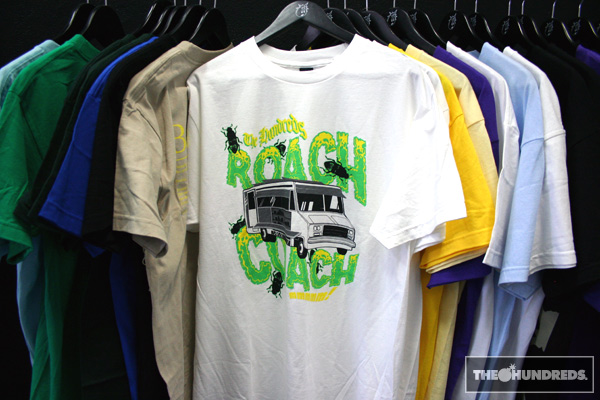 One of our first Chronicles was on Rick Klotz, who was, and still is, one of my largest influences in the game. When I visited Rick at the Freshjive headquarters years ago, I asked him if he would ever consider re-releasing some of his early hits that I had grown up on. Like the Tide parody or the bright, cartoony fruits tee. He smiled and said, “Why don’t you do it?”

After I picked myself up off the ground, I got right to work re-appropriating 2 of my favorite t-shirts of all time with a The Hundreds twist.

The original soapbox graphic read “FUNKY RESURGENT” in the top-left corner. So I re-wrote it to say “FUNKY RESURGENCE.” The original also said “JIVE IN…BUST OUT” under the circle. So in my version, I had it say “FRESH JIVE IN…THE HUNDREDS OUT.” 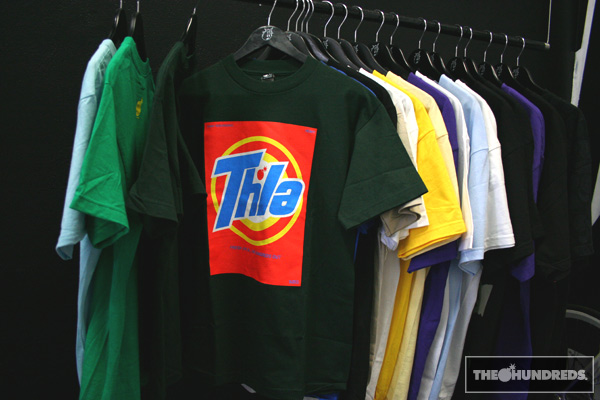 This one was a dream come true. I re-created the illustration as best as I could remember it, because Rick didn’t have any to reference, and the last time I’d seen it anywhere, I had worn it to shreds back in the 7th grade. 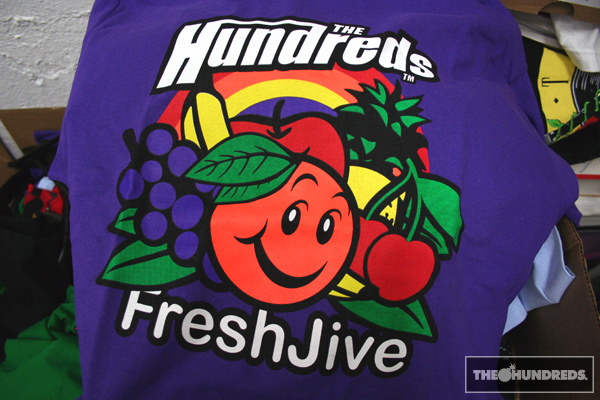 This is the back of the “Fruits” tee. I was always a fan of how Rick had a stable of brand icons that he’d drip down the back of the shirt. So I brought his classic Raw Vibes back, and for the first time ever, put Adam Bomb on a t-shirt. Betcha didn’t know that. 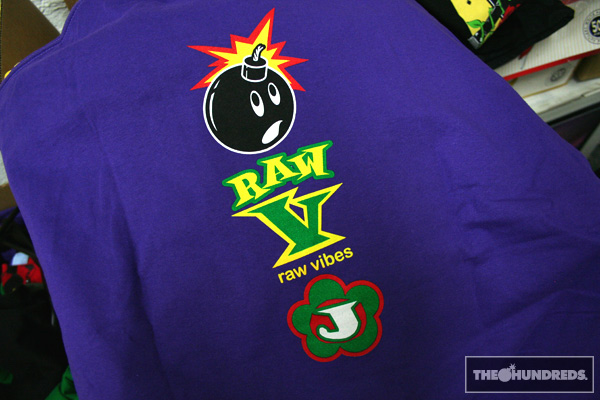 Most people thought that this was just an everyday homage to pitbulls, but the truth is that it’s Griff’s hoverboard graphic from Back to the Future II. 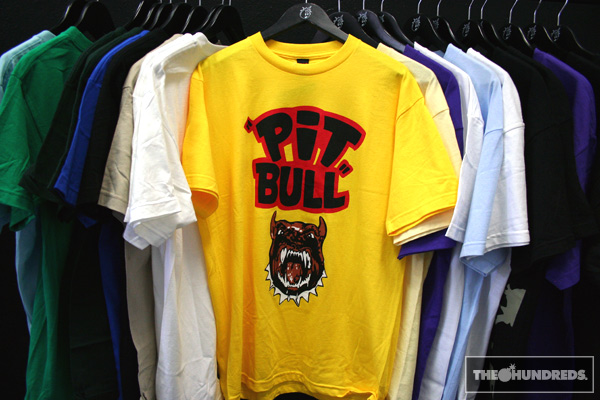 Craola for The Hundreds. Believe it or not. 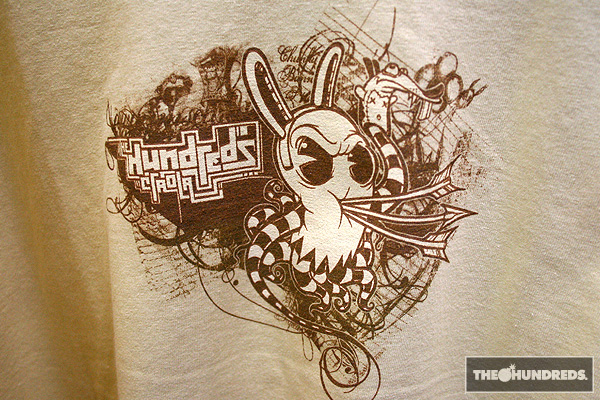 Been watching the Olympics much? To, this day, this is still one of my favorite graphics. A riff off of Sam, the bald eagle mascot of the 1984 Olympics (hosted in Los Angeles), “State of America” served as a nostalgic throwback, Angeleno mantle-piece, and political commentary on the United States’ approach to international relations. 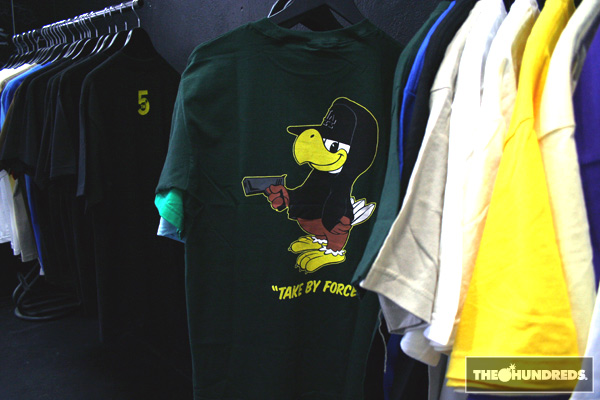 Speaking of political, this t-shirt came off as a typical parody tee from the front, but the overall statement was that of the proverbial tug-of-war between security and freedom in American life. The more security we’re provided, the less freedom we have. The more freedom we obtain, our security is at stake. My favorite graphics have been the ones where I could pack the most thought-provoking message into the simplest of illlustrations. 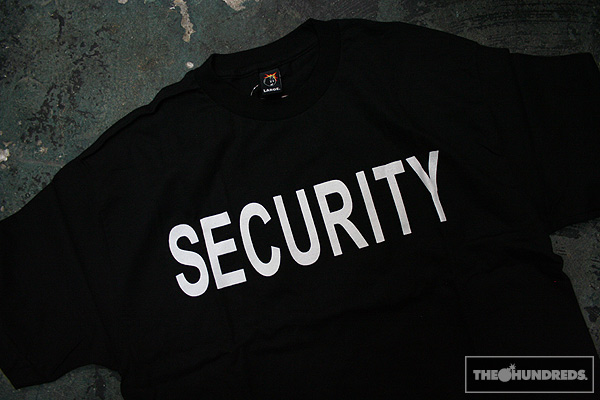 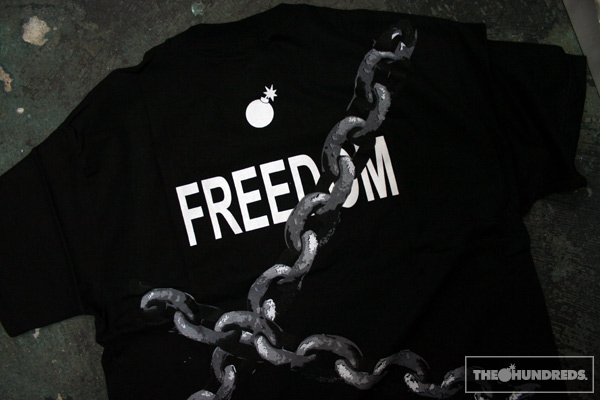 If you were around Southern California in the early ’90s and you were down with some of that devil music, you listened to KQLZ 100.3 Pirate Radio. The renegade radio station lasted only a few years, finally getting kicked off the air in 1993, and now exists in some weird online format. But that logo, c’mon that lives forever. 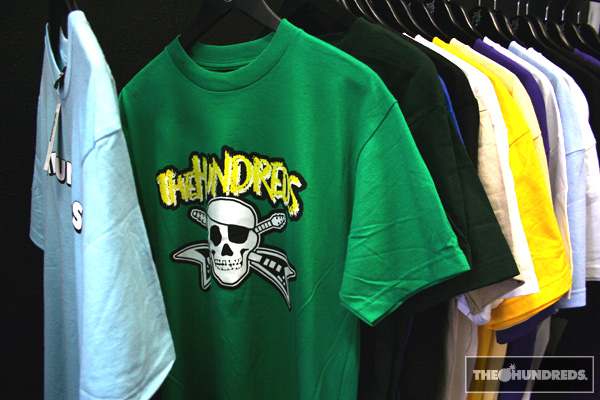 Steve Nazar has become one of our resident contributors, but this was his first foray into The Hundreds. Steve was the original illustrator behind those legendary T&C Surf graphics from the 80s, along with the mascot crew of Thrilla Gorilla, Joe Cool, the tiki guys, etc. So I had him update the o.g. characters with a Cali culture, The Hundreds-ized flip. 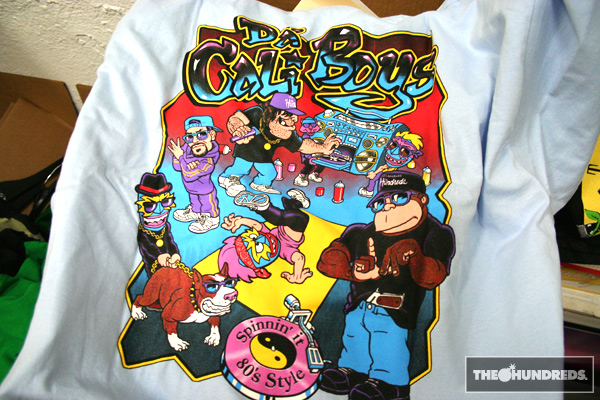 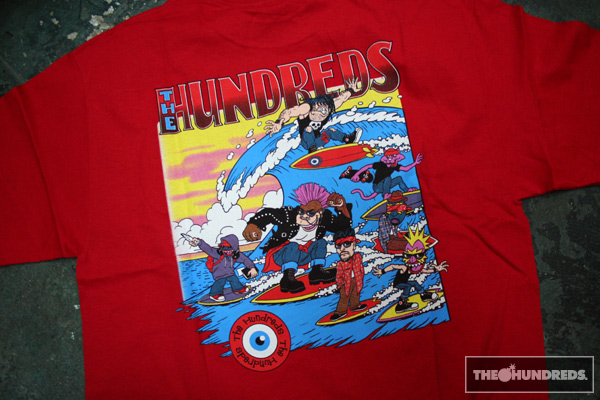 Get the Guadalajara Dog at Pink’s. 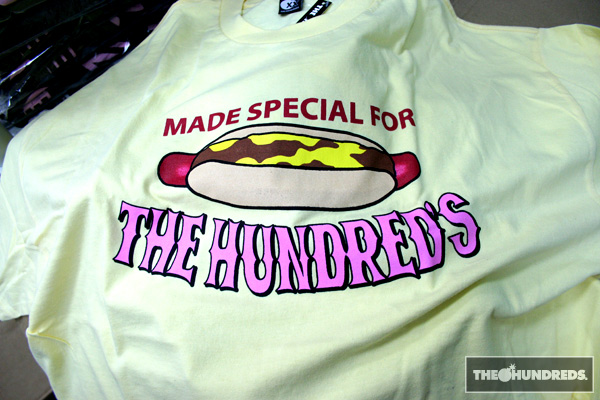 Anyways, there’re crates more that have been rotating off the vintage rack, so get ’em while they’re hot. 5TH re-opens this Friday at noon.