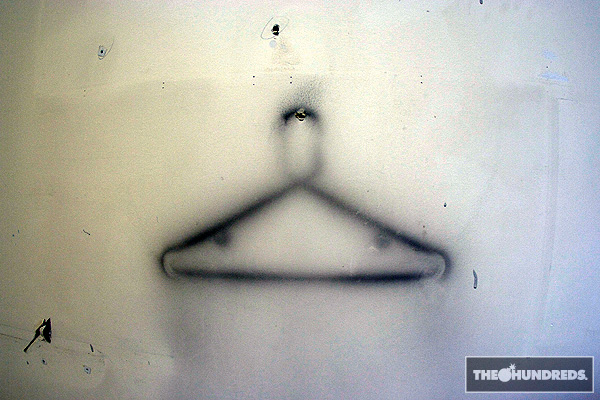 I shot that photograph while we were in New York, in the back of a gutted-out retail store. It looked like an apocalyptic nuclear blast had X-rayed an imprint of what was once a clothes-hanger onto the wall. And had left a mere shadow of something that had existed there for a lifetime.

Considering the economic developments of 2008, it was more than appropriate.

Months ago, Yasi asked me why I had yet to touch on anything regarding the downward economy in my blog posts. I’ve always believed that The Hundreds blog is a window, and a mirror, of the streetwear/culture world. And that really, you look to this site as a respite from your average everyday, a commercial break from your final exam, or a-hole boss, or life, for that matter. If you wanted to read about skyrocketing unemployment numbers, or the mortgage crisis, then you’d just hop over to CNN. But for regular updates on what we ate for dinner, or footage of Gomez losing his mind, or Alex savagely assaulting an inanimate object, you come HERE.

But in doing my annual wrap-up report, on streetwear and The Hundreds life, it was impossible to overlook. For years, we’ve asked ourselves when the streetwear boom would bust. Eventually, the influx of indie labels would impede each other like crabs in a barrel. The surplus of shallow trends, lack of business-savviness, and the customers’ short attention span would also foreseeably contribute to an impending collapse. But in the end, it was something much greater that snuffed out a very great and incredible flame. Something beyond bitter hate and infighting, bad business practices, the flooded market, the bandwagoning, shoddy designs, foundations built on ephemeral fads… all those things that for the past 3 years, the industry know-it-alls had been counting on to level the streetwear arena. It didn’t even have anything to do with the internet! It was the other e-word.

Perhaps it only magnified problems that already existed. Or it might have been a convenient excuse. But in 2008, the Economy took it’s toll on the United States, the world around us, and yes, even our sacred niche culture of streetwear. Brands rattled, gasping for air in boutiques whose own lifelines were choked and withering. The consumers cared less about what Japanese fabrics their wallet was constructed of, and more about what was inside of it. Retail goliaths H&M and Uniqlo and American Apparel and Marc Jacobs established frugality as cool. News flash: Cheap is the new Expensive! And suddenly, $200 selvedge denim was the least of everyone’s concerns.

This past year, the Economy was streetwear’s largest influence. It was the most pervasive, most talked-about, most ubiquitous happening to affect every aspect of the clothing business. More persuading than any sales projection, more telling than any screenprinting technique, more deciding than any design choice.It forced many brands and shops to close doors or look for premature exit strategies, and the vast majority executed questionable decisions that they swore off just years earlier. But hey, beggars can’t be choosers, and everyone is hungry.. so get in the back of the soupline.

The night gets darkest before dawn. But I’d like to remind everyone that the best of streetwear and street culture has always thrived and succeeded outside of the spotlight, in the darkest corners, when the rest of the world is looking the other way. The very essence of street culture has always been rooted in overcoming odds, making do with what you have, and fighting back.

So, with that, I look forward to the best that streetwear has to offer in the new year. I can honestly say that I’m more excited for this next year of The Hundreds, and what’s in store for streetwear, than any of the past 5. If the greatest creativity arises from struggle, then be prepared to have your head blown. Relax everybody, it’s not the end of the world.