Continuing our regular Staff Interviews, it’s time to interrogate Tony, our store manager. He’s a gentle soul, soft-spoken, and modest. In other words, he’d be a perfect candidate for a “To Catch A Predator” casting call. Besides embezzling large sums of cash when Ben and I aren’t looking, and backdoor-ing our product to kids he meets on Myspace (see To Catch A Predator reference), Tony also smokes cigarettes like they hold the secret to life, and holds an unhealthy obsession with Morrissey. He also secretly hates everyone, but does a great job of hiding it. 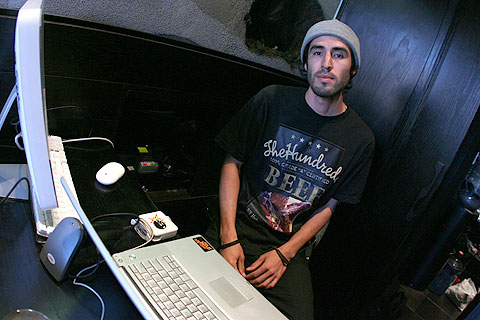 Me: Ready for your interview?

Tony: HmmÃƒ¢Ã‚â‚¬Ã‚¦ itÃƒ¢Ã‚â‚¬Ã‚â„¢s very busy over here. The flies have been waiting for hats for days… I only ask for you to make me look cool.

Haha.. OF COURSE TONY. So, where did you come from? Begin with Galaxy, Planet, then work your way from there.

East L.A. Aka MexicoÃƒ¢Ã‚â‚¬Ã‚¦ Clyde Singleton just walked in and said he bought an Ãƒ¢Ã‚â‚¬Ã‚Ëœ89 ford bronco. I don’t think kids want to read where I came from. They want to know if I have a New Era for them in the back.

You’re absolutely right. But this interview’s not for the kids. It’s for all our prison-inmate readers. What else do you think kids would like to know about you?

I’m taking offers on the size-run of New Eras that I secretly saved.

HahaÃƒ¢Ã‚â‚¬Ã‚¦ How much money have you stolen from Ben and I since the store opened? A rough ballpark estimate.

Give me a minute, need to launch the calculator. Does taking clothes and selling it on the side count too? I have no idea, but it’s definitely up there. 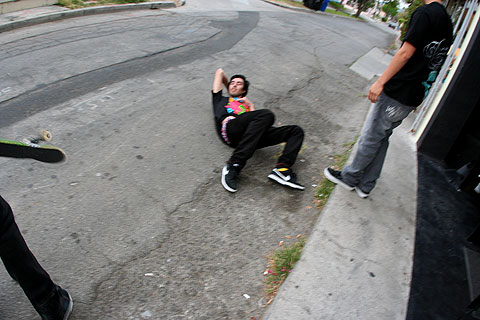 What’s going on in your head when Ben barges through the store every 5 minutes to tell you to sweep something, or move this, clean up that?

That doesn’t really happen because I hear “the keys coming” and I pretend I’m already doing something. He’s easy to fool. You, on the other hand, are a sneaky bastard. Catch me off guard MyspacingÃƒ¢Ã‚â‚¬Ã‚¦

What’s the stupidest question a customer has asked you?

Ãƒ¢Ã‚â‚¬Ã‚Å“Does Bobby ever come into the store?,Ãƒ¢Ã‚â‚¬? and you were standing outside.

Yes, but the best part was, Ãƒ¢Ã‚â‚¬Ã‚Å“Does Bobby ever come in the store?,Ãƒ¢Ã‚â‚¬? and I’m like, Ãƒ¢Ã‚â‚¬Ã‚Å“Yeah, he’s over there,Ãƒ¢Ã‚â‚¬? and you were stuffing your face with something I could only imagine Ben eating. Then I said, Ãƒ¢Ã‚â‚¬Ã‚Å“He’s not so cool as you imagined.Ãƒ¢Ã‚â‚¬?

I want to talk shit on Switch.

I like how he claims the bay so hard but when James Kelch was in here he had no idea who he was. And that he skates everyday and I beat him at S-K-A-T-E, and will continue to do so. And I only let him catch up on that last game cause he lets me use his Blackberry charger..

What about Cool Hand Morgan?

You mean Cheech? (And Jon Chong). He does a good job of getting the flies out of the store and usually has a lighter for me to use. Good employee. 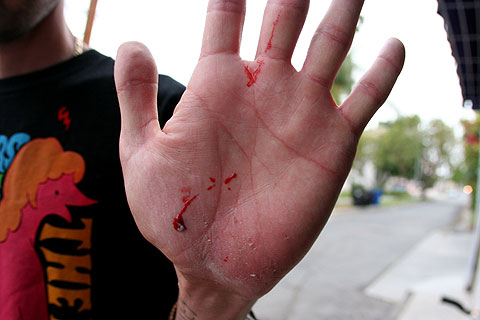 Who’s your favorite celebrity that’s walked through the doors?

ItÃƒ¢Ã‚â‚¬Ã‚â„¢s a toss up between Ian Ziering and Morrissey. Actually, Scotty is my favorite celeb. But, he’s usually a letdown. He looks a lot cooler on the internet. You shouldn’t let that critter out of the office. Bad publicity.

I know. I think he kicked a baby in the teeth the other day for asking if he would give him an Adam Bomb sticker.

I don’t believe that, I can see that from Steph Ãƒ¢Ã‚â‚¬Ã‚Å“Attitude ProblemÃƒ¢Ã‚â‚¬? Hundreds, but not Scotty. Scotty’s actually really good with kids. Seen it first hand. But then I figured it was just Ãƒ¢Ã‚â‚¬Ã‚Ëœcause the kid probably thinks he’s playing with another chubby 3 year old kid.

So what else, Toblerone? How many homeless people come in everyday?

Patricia comes in on the regular, but I’m not sure she’s homeless. All the other lurkers just kind of lurk around which provides entertainment at times like this when Myspace isn’t accessible. She actually just walked in. HahaÃƒ¢Ã‚â‚¬Ã‚¦ She says, “Tell Bobby to bring it.” She really doesn’t like you..

How many times have people walked face-first into the glass windows?

Like 10 at least, but actual GREAT onesÃƒ¢Ã‚â‚¬Ã‚¦ like full-blown full-forceÃƒ¢Ã‚â‚¬Ã‚¦ like 3 or 4. And if any of you reading this have done it, I’m sorry for laughing.

Whenever they bang into the windows, people always get that weird stunned look immediately afterwards.. this odd, dazed and confused stare like they remembered they left the oven on at home or something. And then they collect themselves and leave. Quickly.

They’re so great. There’ve been lip prints, and forehead prints on the door. And for those who can’t figure out how to open the door, just Ãƒ¢Ã‚â‚¬Ã‚Å“Push.Ãƒ¢Ã‚â‚¬? 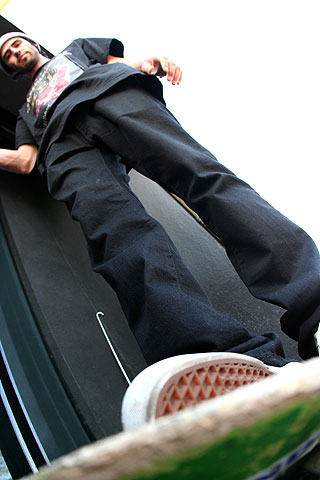 Where did you work before this?

For a year, I slept a lot and rode my bike. But before that, I worked for 9 years at World Industries which later turned into Dwindle. The last 5 years, I worked for enjoi. Which is another great site. enjoico.com. Best dudes ever.

It was great at first, because you get to hear his crazy ideas. One time he came in so excited that he had a great idea,.. he was saying he was gonna go and get some illegal immigrants from Tijuana, pay them a shitload of money, get a beater car, put all our logos on the roof, and have them get into a car-chase all the way back over the border. So we would get TV coverage.

Another was when we got in a helicopter and dropped $5,000 over the first X-Games in San Francisco. Most of it went into the Bay because we couldn’t figure out where to drop it from. And he got a serious fine for littering the bay, and almost got us arrested. Good times.

Have we ever done anything remotely as creative?

Tony. A couple years back.

What the hell is a Toblerone?

A delicious chocolate snack from Europe.