IT IS WHAT IT ISN'T.

There’s this great Steve Rocco quote in the 2007 documentary, “The Man who Souled the World,” that goes something like this:

Okay, here’s the thing about skaters. It’s pretty simple. You set ’em loose, they do whatever they want. They will destroy everything around and you can sit there and laugh at it, but the problem is when they’re done destroying everything, then they go for you. Because there’s nothing left for ’em.

Rocco was referring to the rise and demise of his ’90s skate company World Industries, which eventually collapsed under the insurrection of its own riders. I’ve gotta say, however, that although Rocco was right, he didn’t nail it completely. Because there was something left for the skaters to destroy. Themselves.

Skateboarding is not the same (or in Airwalk-speak, NTS) as we remembered it in the ’80s and ’90s, and skateboarders have no one to blame but themselves for the implosion. Like all beautiful secret subcultures that gain traction in the pop hemisphere, savvy businessmen —some disguised as your favorite pros! — figured out a way to make money off it. Then skaters whose parents disowned them for their derelict hobby became dads themselves, and encouraged their children to skate, celebrating Junior’s first flip trick and back-patting over a back-tail. Fighting against the man resulted in cookie-cutter public skateparks (for the aforementioned toddlers to skate safely and cooperatively). Rare soda pop commercial appearances by skaters evolved into video games about skateboarding, which cartoonized a pure and passionate art. And before you know it, Nike became the biggest skateboarding company in the world, decks are now as ubiquitous as baseball bats, the most dangerous pastime is stripped of risk and rebellion, and the feral beast had been anesthetized and tamed.

Mike Carroll was recently quoted in Thrasher Magazine to “Keep skateboarding within skateboarding and stop giving it away.” And over the past week, this Jenkem essay circulated, also decrying corporate takeover of our sacred culture. Entitled “How Corporations are Changing Skateboarding and why it Matters,” the article points fingers at the Maloofs, at Dyrdek, at Adidas, and any capitalizing giant for kidnapping skate, brainwashing it, and turning it out.

But the hard truth is that the essay should’ve been called “How Corporations CHANGED Skateboarding!” because the author beats a horse that died 10 years ago. It’s old news, dude, and don’t you dare pretend like we didn’t watch this happen right before our eyes. We let the swooshes and the stripes take over the slats, and we signed off on the energy drinks. We turned our heads and giggled sheepishly because everyone was making money and although it wasn’t right, “Come on man, I got bills to pay.”

Which is totally fine. I do too. But don’t go bitch and cry about your stolen skateboard when you let a stranger borrow it for $1.

The November issue of Thrasher Magazine published a similar complaint by photographer Michael Burnett. Again, in typical diagnose-the-problem-but-don’t-provide-a-solution fashion, he winds down the article to jab at us, The Hundreds (OMG). “I guess if the skate companies can’t make a T-shirt more enticing than a beverage brand or The Hundreds (That’s right assholes, I’m fuckin’ on to you), then we’re fucked anyway.” And you know what? Mr. Burnett is absolutely right. 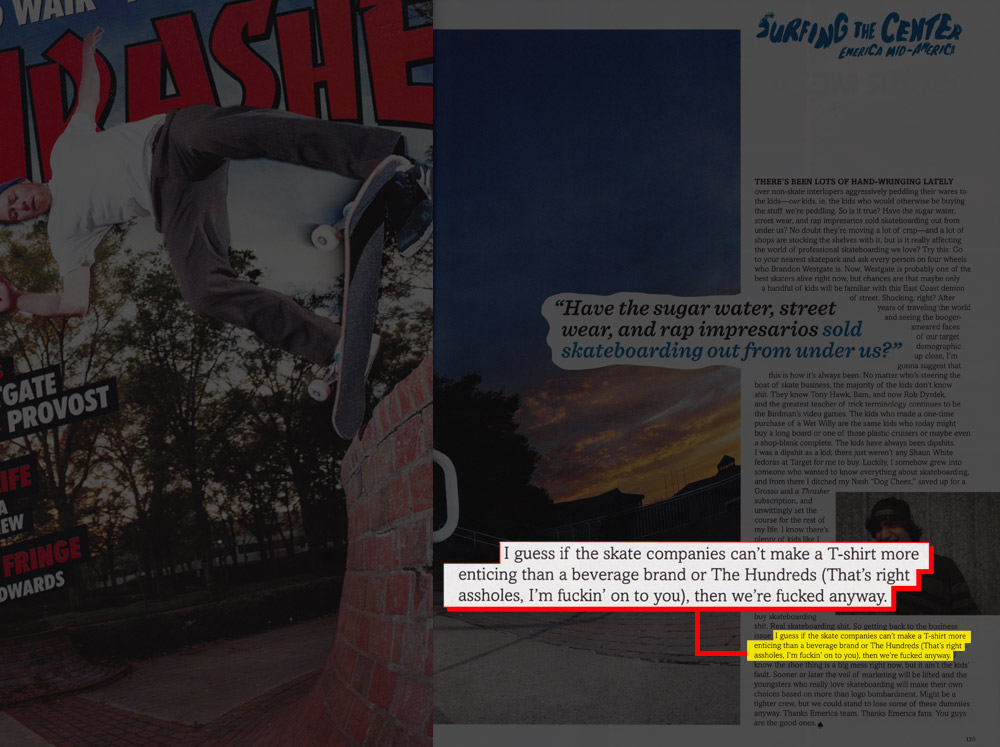 Dear skate companies, YOU ARE FUCKED. For the majority of my teenage years, I lived and died by your t-shirts – the clever ones with smart parodies and bold, defiant messages – the artistic ones with slick illustrations and next-level graphic design. But then you decided to pander to the bottom-line, marking down your tees to $14.99 in mall chains, diluting the sophisticated art down to 1-color logo hits. And worst of all, you let a smalltime, interloping Streetwear brand like The Hundreds move in and own the graphic t-shirt market, because although we know that sarcastic, conceptual designs don’t make the most money, they sure keep skate customers interested – and interesting.

Shame on you, skate companies*. You sleep with the whore and then blame us for stealing your girlfriend. Instead of awaking from your drunken ASR stupor and writing essays about The Great Skate Robbery, how about actually doing something about it?

We did. We created a skate brand for everyone who’s tired of skate brands. Inspired by the tone and aesthetic of the Skateboarding I once abided by and loved, our t-shirts aim to be sardonic, ridiculous, statement-driven, channeling the wit of the McKees and Clivers. We have sponsored and promoted a team of riders since the start. No pros or marquee celebrities, but real, everyday skateboarders on the homey tip who are just really, really good. The Hundreds is owned by a skateboarder (yours truly, although a sucky one), sponsors skateparks nationwide with branding and funding to keep the parks unique, and takes advertising space in Focus, FTK, Lowcard, and Steez to support local skate ‘zines over dominant media players.

Dear skate companies, while you’re tweeting about losing shelf space to athletic shoe conglomerates, The Hundreds is actually doing something about it, establishing our own sneaker line to compete against the big dogs. Yeah, we know it’s an uphill battle, but it disgusts us that the majority of the independent footwear brands in core retailers have been massacred. Instead of blaming someone else for it, we choose to fight back. Feel free to give us a hand (or a foot).

And most of all, here’s this, skate companies. Stop trying to define what Skateboarding is. Because Skateboarding’s always been about what isn’t, and that’s why you fell in love with it. As much as I long for the dangerous elements, the so underground that it’s 6-feet-underground, the poor and pure charm of the broken ’90s skate industry, Skateboarding will never be the same by virtue of everything it stands for. Skateboarding is up for grabs. So stop talking and start taking. Skateboarding doesn’t belong to companies, it belongs to the people. If it really means that much to you, then how could you let this happen?

*of course, Baker, Skate Mental, Huf, and many others are the exceptions to the rule…