Almost every day for the past 8 years, I’ve used this blog to not only take you behind the workings of our brand, but also our life experiences. As a lifestyle purveyor, we seek to bring you along with us as we get to realize dreams and opportunities.

Late last year I was blessed with a once-in-a-lifetime opportunity that also happened to be a lifelong dream: To be personally involved in a Beastie Boys video. Adam Yauch (also known as MCA, also known as Nathaniel Hornblower) was looking for a DeLorean to be featured in his latest project, a music video to promote the Beastie Boys’ long-anticipated new album, that was so under-wraps that they couldn’t even tell me how the car would be used throughout the film. I just so happen to own a DMC-12, (the best original DeLorean in the world as a matter of fact. Holler.) So…lemmethinkaboutit..OKYEAH. I gladly obliged. 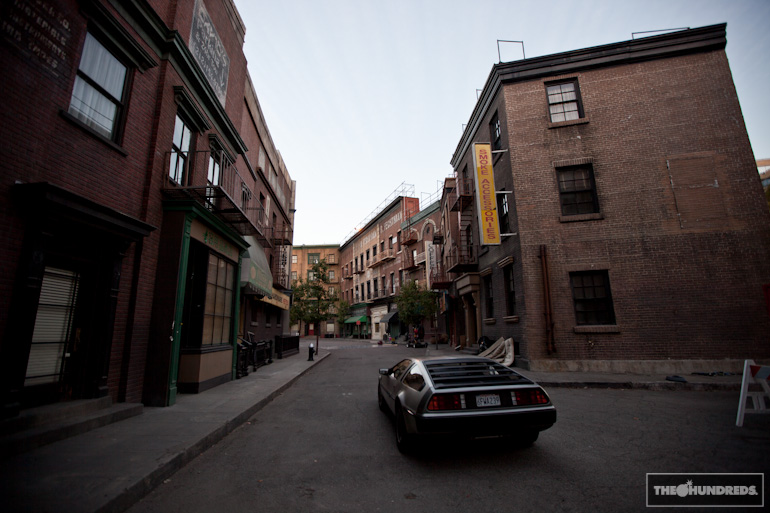 I can honestly state that The Beastie Boys were the first popular music I was exposed to in my life. My cousin had aLicensed to Ill cassette that we’d play from A to B, raising hell to “Girls,” bouncing off the walls to “Brass Monkey,” the album was a concocted anarchy ideal for a kindergartner. Years later I’d come to appreciate Slayer’s Kerry King on “No Sleep ‘Til Brooklyn” and “Fight for Your Right.” Which brings us up to date.

The video shoot was for “Fight for Your Right (Revisited),” Yauch’s magnum opus, if you will – not just a Beastie Boys music video, but a movie, that would debut at Sundance and shoot for an Oscar. “Fight for Your Right (Revisited)” is a reflection of the Beastie Boys’ entire repertoire of musical masterpieces, from obscure lyrical references to past video homages. And if you’re a Beastie Boys junkie like me, then you know and appreciate the depth of their music video library. Which one’s your favorite, “Sabotage” or “Intergalactic?” “Sure Shot” or “Shake Your Rump?”

Call time was at 5am and I was there bright and early. 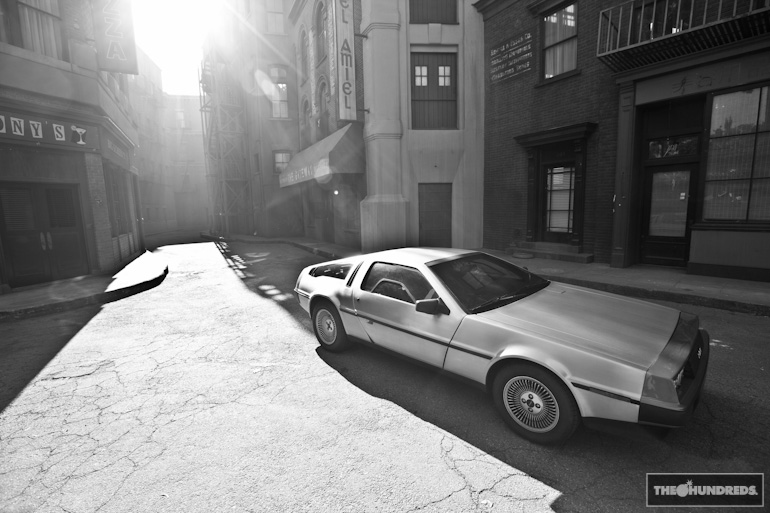 This guy was stoked. He had an awesome job, to recreate the Paul’s Boutique sign. 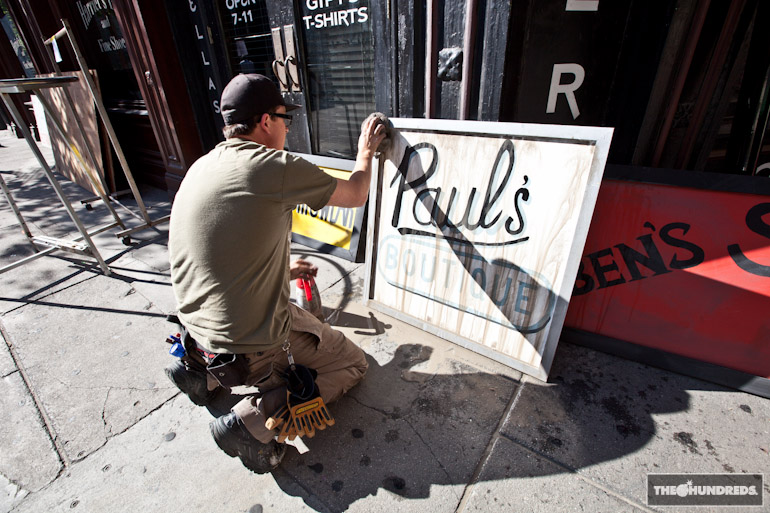 and then to recreate the entire Paul’s Boutique corner: 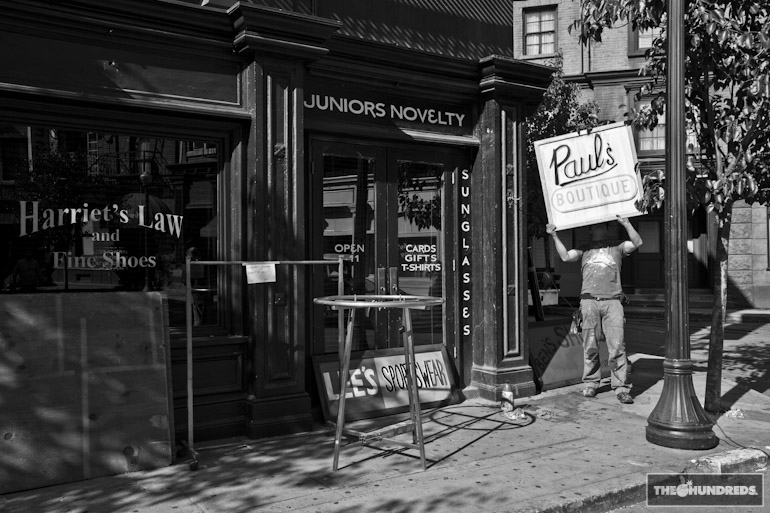 So much attention to detail that was lightly grazed over in the final video cut. Shows how much work goes into these productions. The tags are a nice touch, throw-ups reminiscent of New York City period pieces: a little Futura re-creation, Stay High, Voice of the Ghetto… 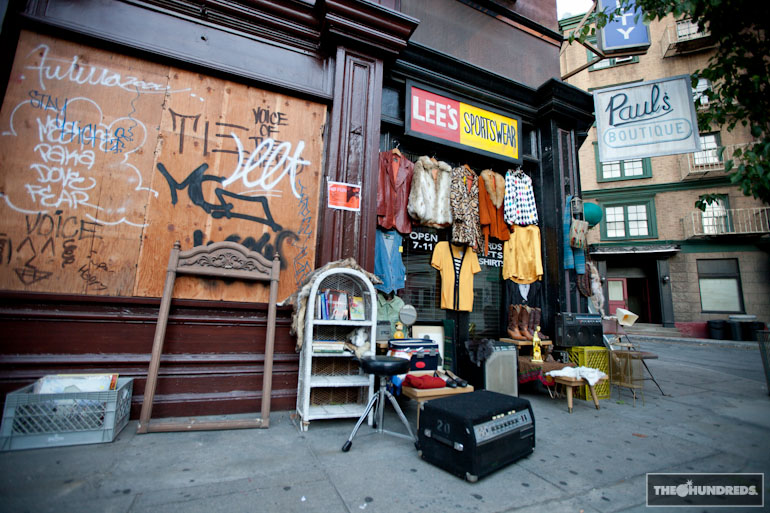 I had a few hours to kill while the cast got ready. Stanley Tucci and Susan Sarandon were the first onset in the wee hours, getting hair and makeup done in the trailers on the right. I had a little office space in that first trailer on the left, so answered some e-mail, then got bored and had a one-man eating contest at the craft services table. 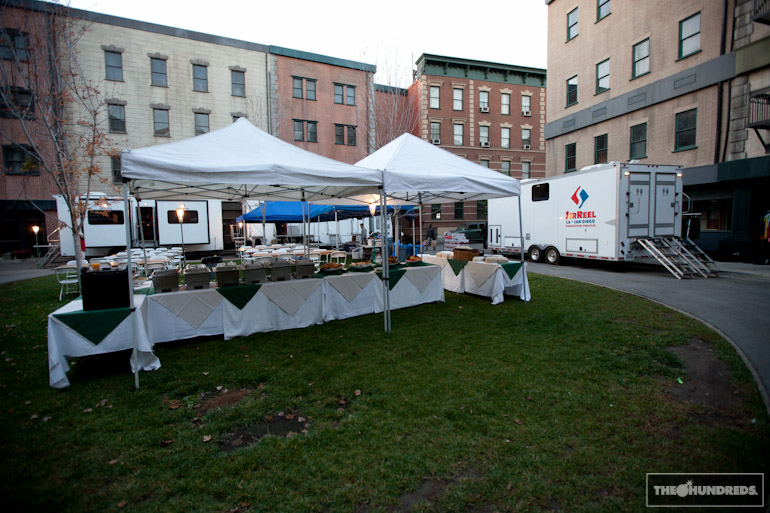 They even had a girl baking up all kinds of snacks and treats throughout the day. I had pastries, deli sandwiches, vegetable wraps, warm chocolate chip cookies, and that was all before 7am. Felt fantastic. 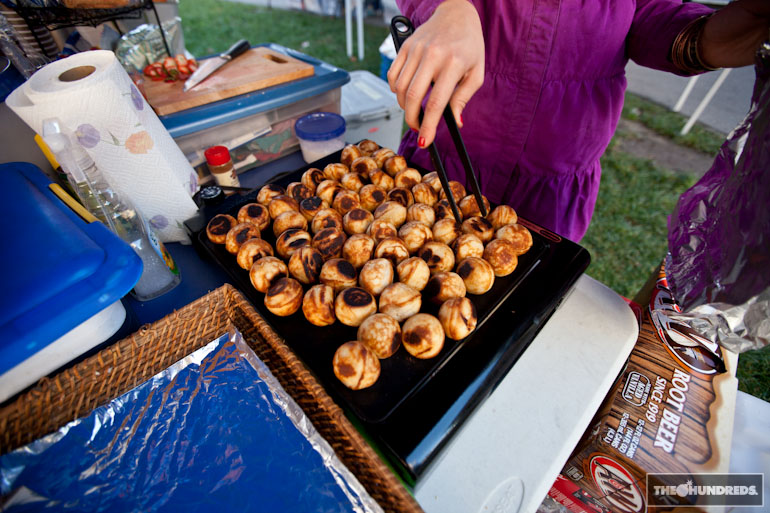 Here’s the main street shot. If you’ve seen the video and movie, you can see the police van used in the finale, the limo for Chloe Sevigny, Kirsten Dunst, and Maya Rudolph, and the building to the left is where Elijah Wood, Danny McBride, and Seth Rogen run down the stairs and loot the convenience store. When I shot this, they were filming the scene with Susan Sarandon and Stanley Tucci. It was hard to stay quiet onset, keeping our laughter muffled while the actors ad-libbed through their lines. And that was really the rule of the day. Most of that dialogue you see throughout the video is totally made-up on the spot, all adlibs.

There were really only about 20-30 people around, but a constant buzz of excitement and anticipation that hummed throughout the day. Everyone involved understood the importance and gravity of the video. Some of the crew told me they’ve been working in the industry for decades and this was the biggest project of their career. No cameras allowed onset, not even cameraphones, no tweeting, no texts, nothing. Super top secret, and I think they did a great job of keeping everything controlled and confidential until the video’s release last week. Aside from the Beasties’ own photographer, I was the only one onset to document the production, so hope you feel as lucky as I did to get this kind of access. 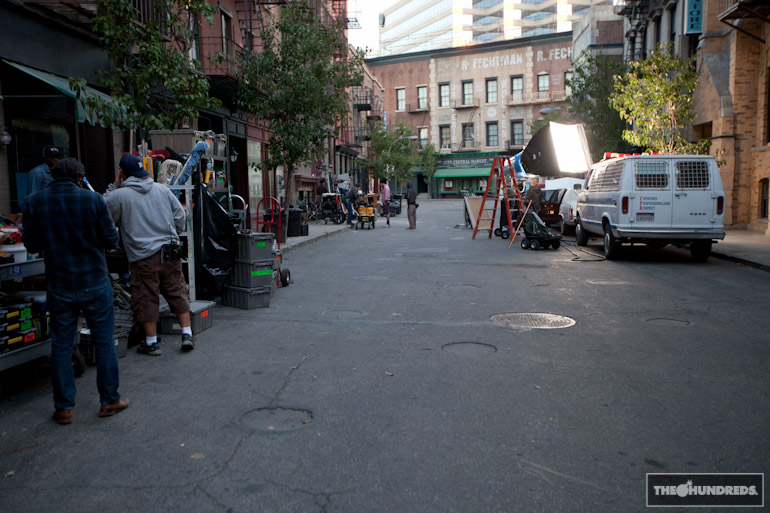 I’m glad that Von Dutch hat to the right didn’t get used. 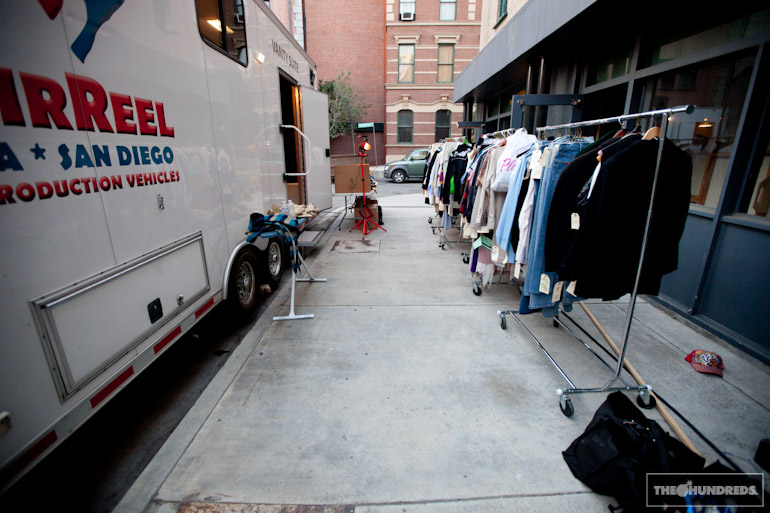 It’s gotta be pretty cool to say you scuffed up some shell-toes for a Beastie Boys video. 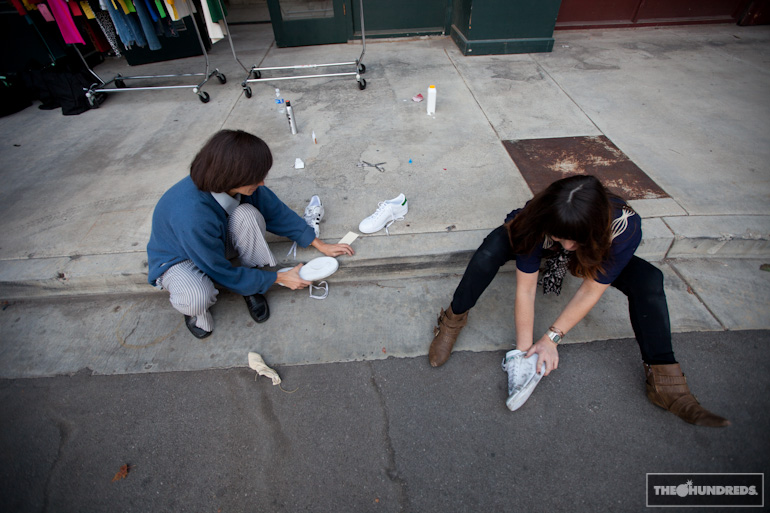 So if you’re a Beasties fan, you know that MCA directs the videos and here he is going through the shots. If you’re a real Beasties fan, you also know that he’s been enduring a hard-fought battle with cancer over the past few years. He’s not out of the woods yet, but he’s not letting it hold him down in any sense – incredibly inspiring to see the icon still creating and trendsetting. 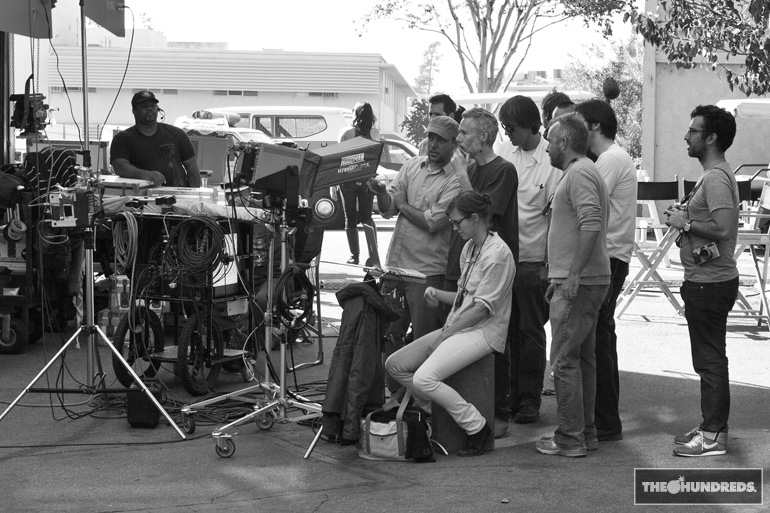 Time for me to get the car. 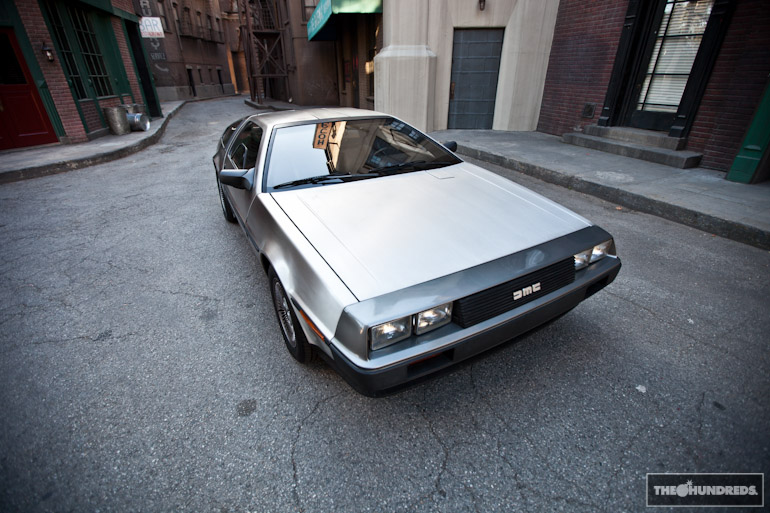 Aside from the aforementioned names, the video features the following personalities: Will Ferrell, Amy Poehler, Ted Danson, Seth Rogen, Elijah Wood, Will Arnett, Jason Schwartzmann, Orlando Bloom, Jack Black, John C. Reilly, Roman Coppola, Steve Buscemi, pretty much all the coolest people in the world besides Ben Hundreds. I also have to add that they all donated their time for free, all on the strength of the Beastie Boys’ name.

Unfortunately, the coolest people in the world don’t have the coolest representation and management in the world, so I was asked not to publish the photographs of anyone except the Beastie Boys. It’s a shame because I have photos of Will Ferrell, Jack Black, and John C. Reilly goofing around (all. day. long.). And more importantly, great photos of MCA directing all the players. So for now, use your imagination, and just mix in a lot of radness. And just know it was about 10 times radder than that. 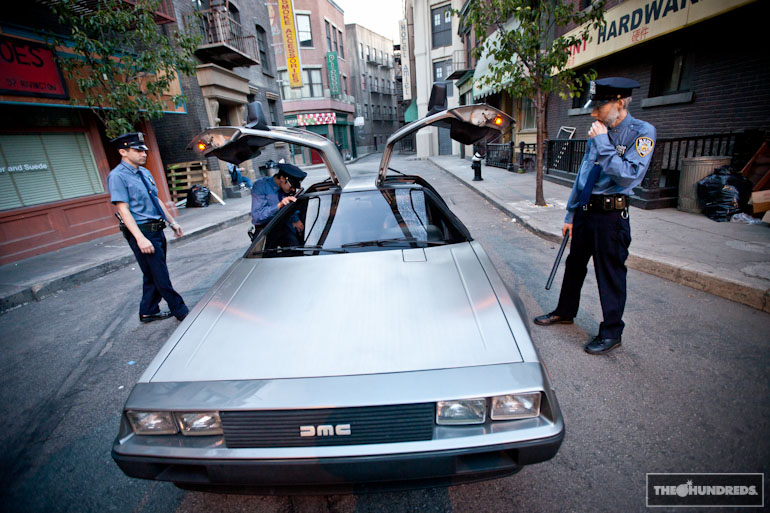 The movie’s finale, as it was originally shot, closes with Mike D, MCA, and Ad-Rock pulling up as cops, throwing the funnyguys into the paddy wagon, squeezing into my 2-seater car and careening around the corner. 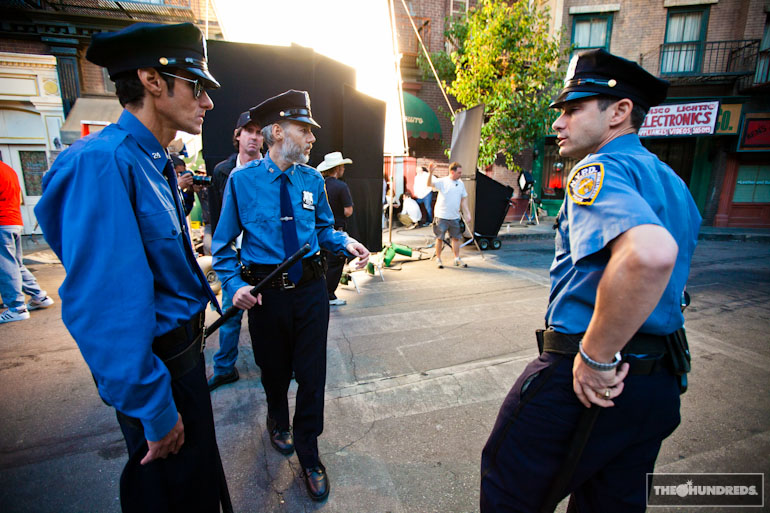 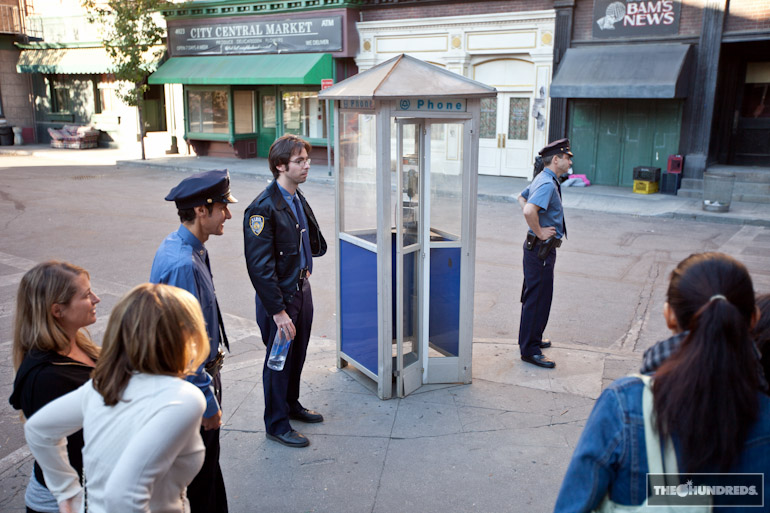 He’s the A-D-R-OOO-C-K. In the place with the bass he’s going all the way. 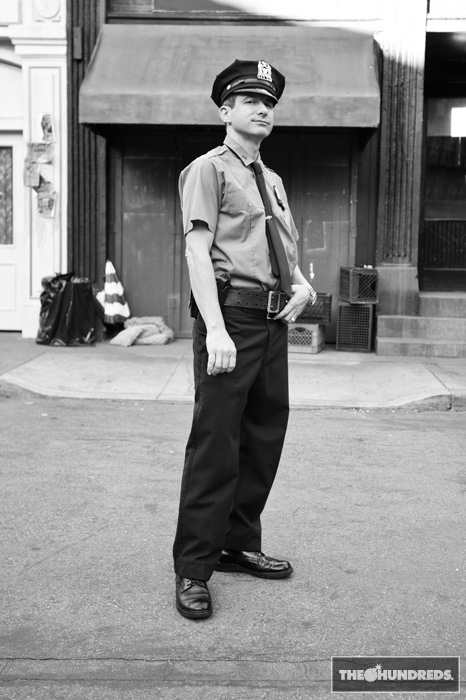 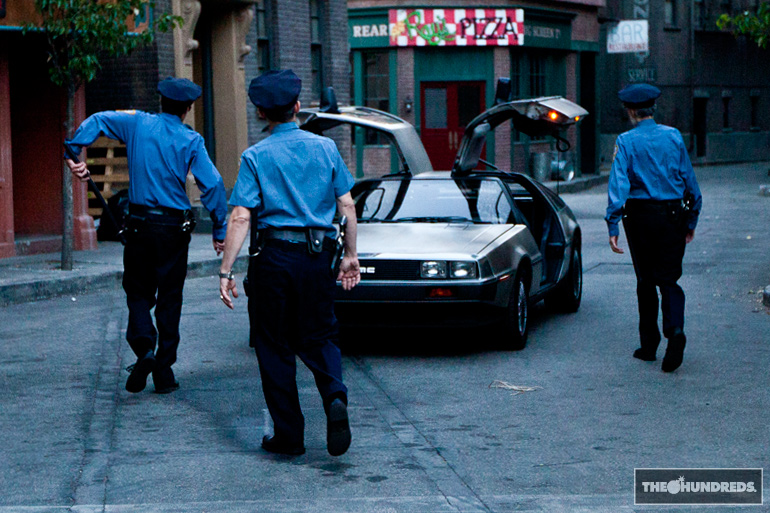