I made a lot of friends this weekend at The Hundreds LA Warehouse Sale. That’s one of the best parts about events like these. It gives us a chance to meet you, the customer, and hear your feedback and TH stories.

This crew was one of the many that camped out overnight on our street to get in. They said it was well worth it, which I still don’t quite get. 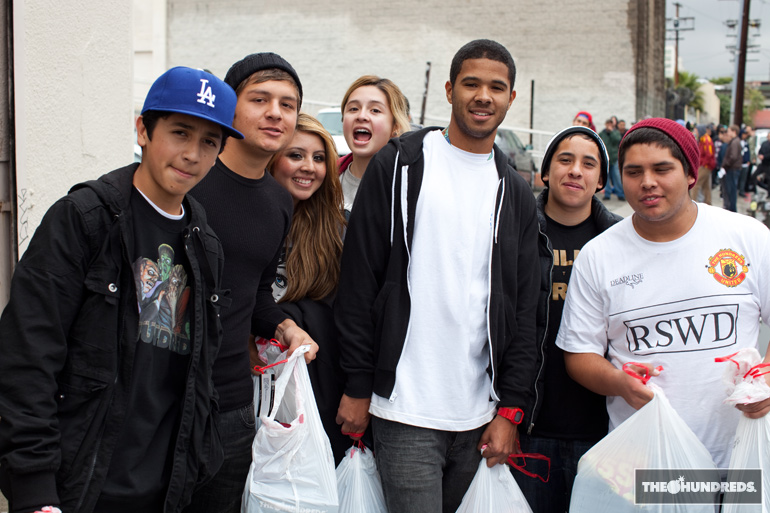 These guys came in from the Valley. She says she visits the website regularly for The Photo Booth. I asked if they were together and she said the guy in the middle was her brother. Awkward. I hate when I do that. 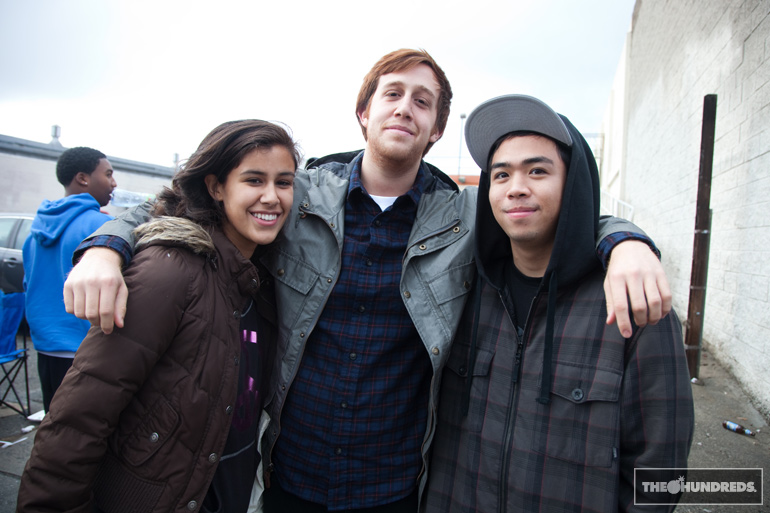 My man in the middle waited hours in line with his homeys, but wasn’t planning on getting anything. He was pretty adamantly against it, actually. Too cool for The Hundreds, I get it. I bet if we put The Strokes on a t-shirt, he’d be interested.

I told the dude on the left he looks like he traveled from the ’70s to get here. P.S. That’s notChromeo. 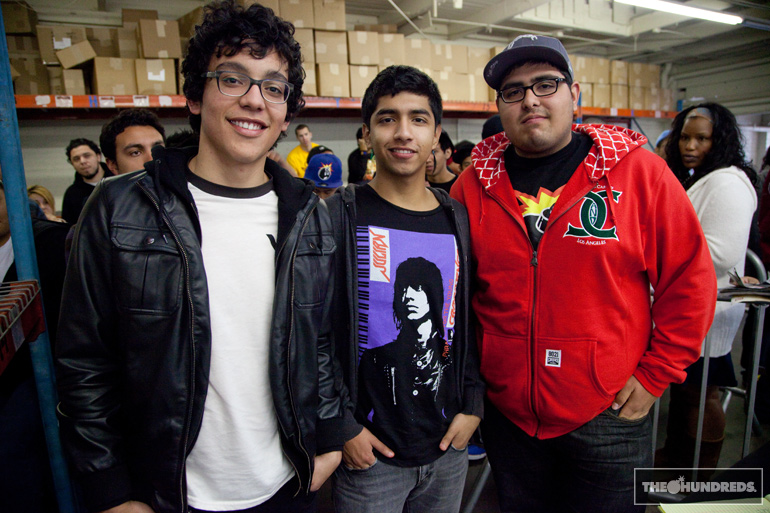 There were plenty of other sample/warehouse sales this weekend. These girls came from the Hellz sale right down the street. 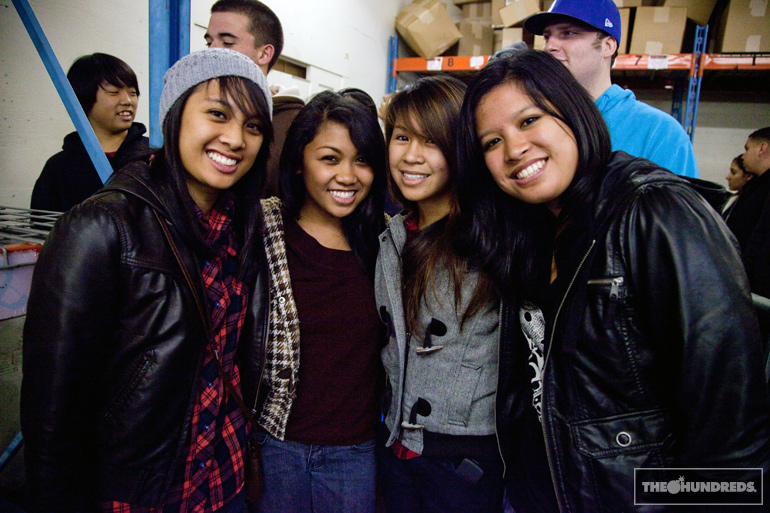 Where’s Madam Bomb been at? 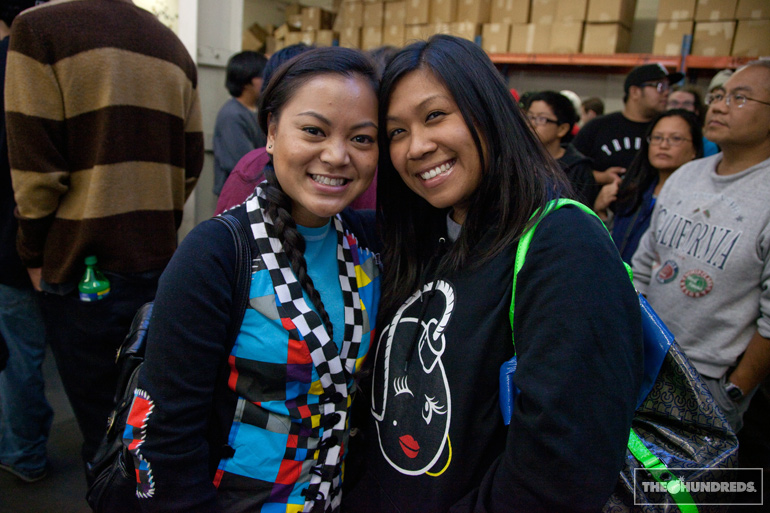 Most of you TH experts know that we put out New Era samples and prototypes at these Warehouse Sales every year. Here are 2 of the much coveted RSWD/POST sample New Eras that sold.. these are 1 of 1s, you won’t find them anywhere else in the world. Ever. 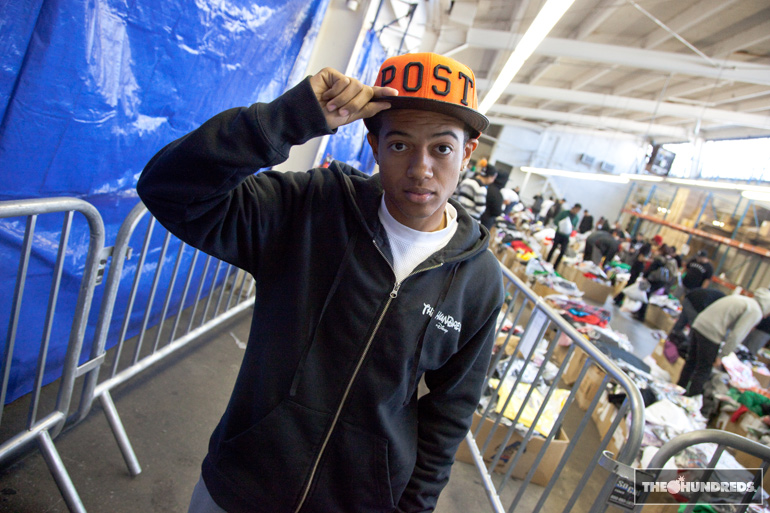 Watch out behind you dude, Purple Switch has got that shifty eye going. 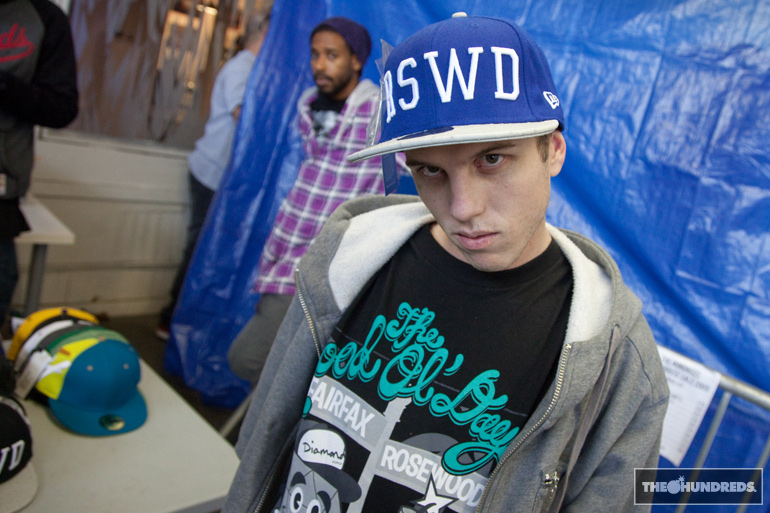 Sami, in the middle there with the white hat, was filming the entire day. She’s a budding videographer, and in the middle of setting up her Youtube pageHERE. It’s very inspiring to see young people finding their creative niche. One day, you’ll see her onstage accepting that Oscar and I’ll be that guy on the couch telling all his loser friends “Hey I knew her before she became famous.” Then I will eat 3 ding-dongs and fall asleep in the bathtub. 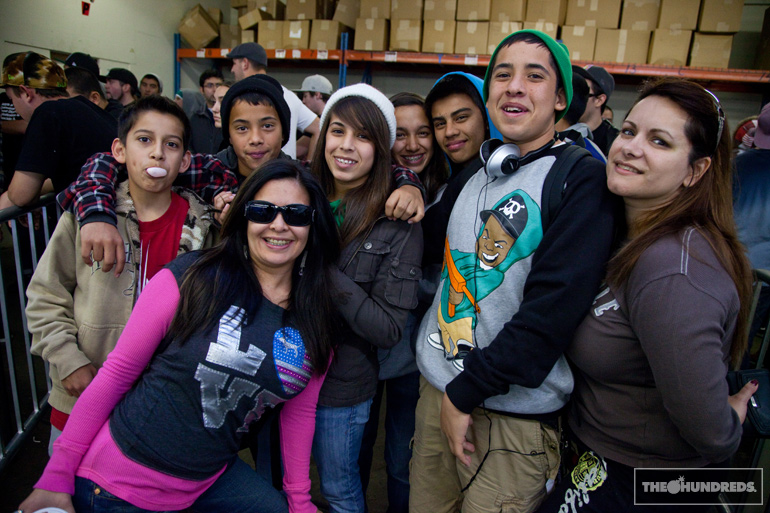 Toy dogs are fun ‘cuz you can bring ’em with you to events like these. That’s about all they’re good for though. Juuuuuust kidding. 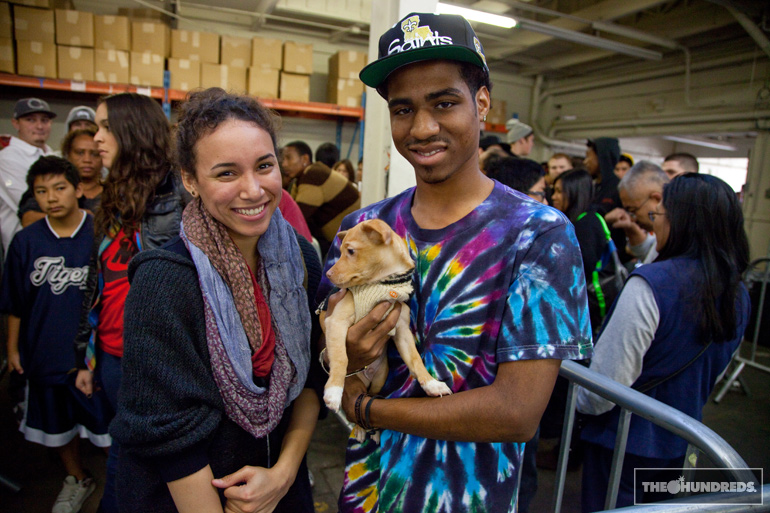 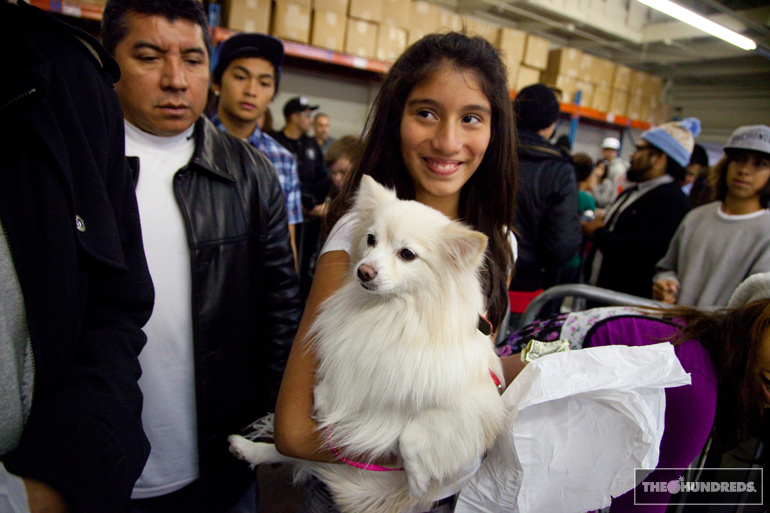 These two came all the way from Las Vegas, by way of Texas, and were some of the last ones to squeeze into the sale on Sunday night. They’re both in school for Fashion and are gonna end up out in LA hopefully at some point. Did you spot her dog? 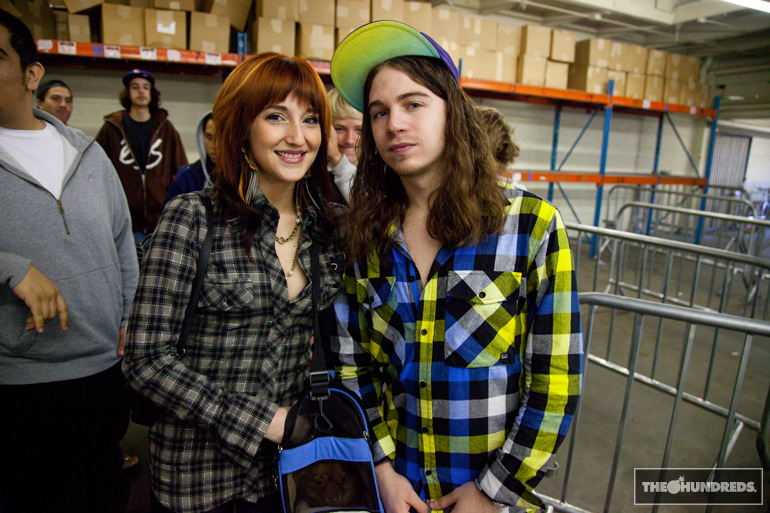 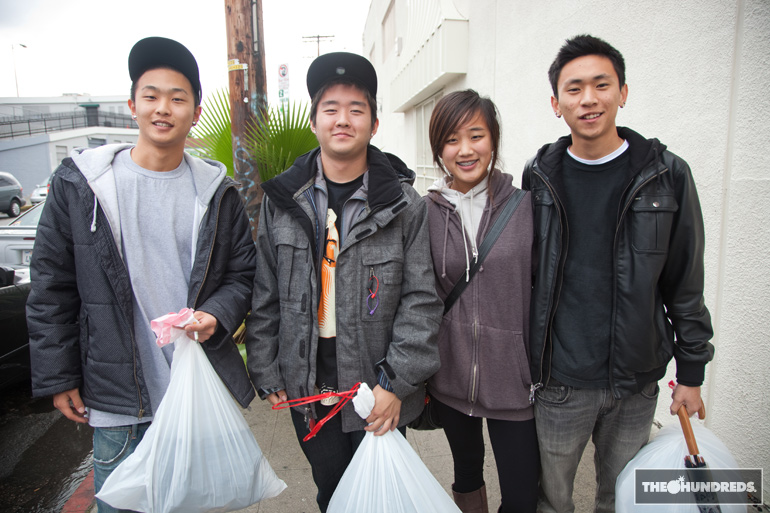 You can always tell when Ben is Tweeting, tryin’ to be all slick. Like when a fat kid steals cake and eats it in the corner. Lil’ Mike has the worst Twitter ever. Lil’ Mike is the worst ever, period. 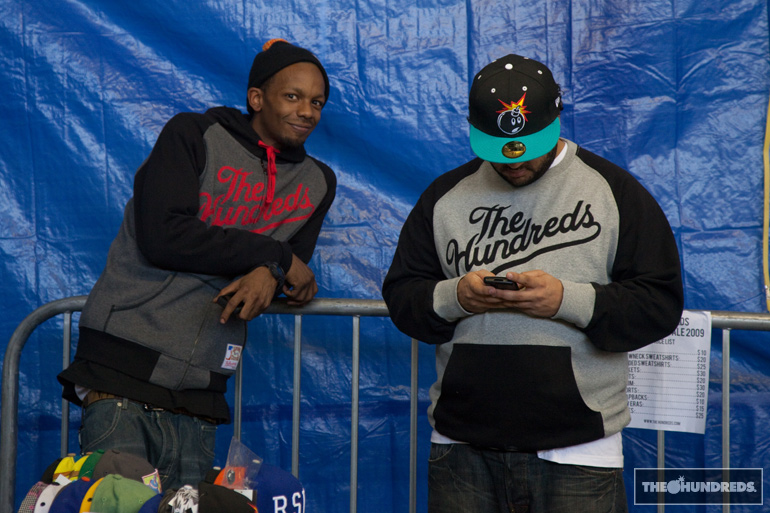 So many couples, ton of supportive girlfriends who were down for the cause and dig through boxes. These guys came from Long Beach and put in WORK. 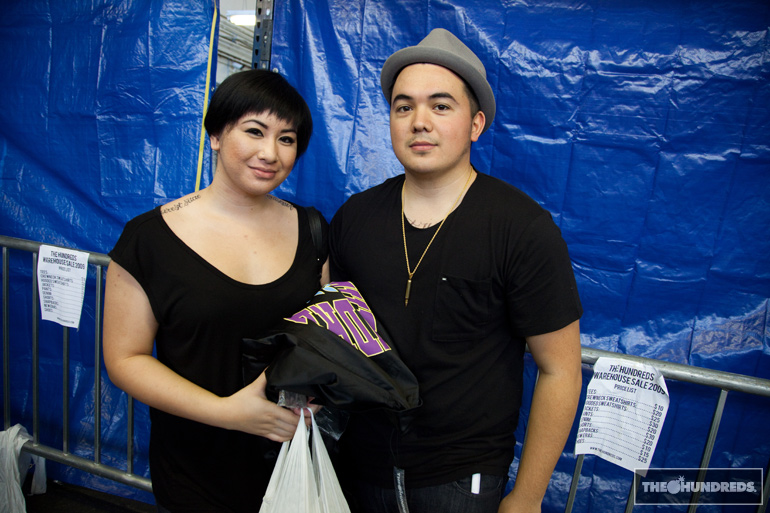 These are 2 of my new friends. When the TH DeLorean was at the shop, she came by herself on opening morning to take photos of it for her boyfriend, since he was working. They actually both work at the 99cent store and are loyal TH fiends. 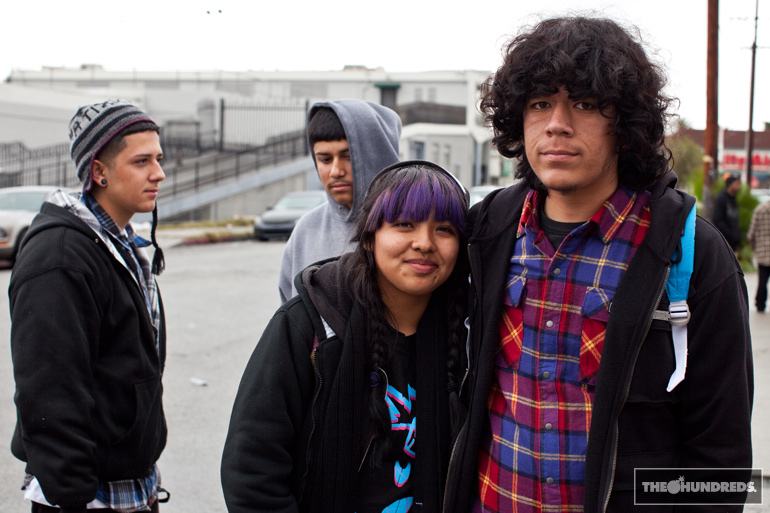 This couple came ALL the way from the future. Apparently The Hundreds is bigtime in the year 3000. And I sleep in a bathtub. 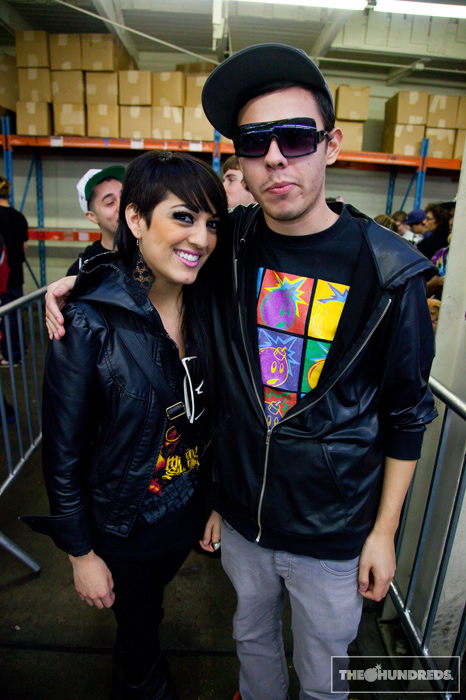