I must be hungry. Here’s another food blog.

Back in the ’80s and ’90s, sushi was the exotic Asian delicacy that all the white people were losing their heads over. Famous people would always make oddball references to the raw fish dish in movies and popular media. It was super trendy, super sexy, and super lame in my opinion. Fast forward to the past few years, and the bandwagon has pulled up to Korean BBQ. I’ve eaten Korean BBQ all my life (naturally), had it in London, in Japan, in New York, Cerritos (The Corner Place what what), Hong Kong, but nowhere beats L.A. Even compared to actual Korean food in Korea. Say WORD.

Makes sense. There are a quarter of a million Korean-Americans living in and around Los Angeles. And all those Koreans gotta eat somewhere, right? I’m here at Chosun in the heart of L.A.’s K-town. Most brave Angelenos start off their newbie Korean food experience at this well-known eatery. Telltale signs of a tourist-y, kinda-authentic Korean food experience: LOTS of white people (who act like experts). It’s CLEAN. The Korean waitresses are FRIENDLY and speak perfect ENGLISH. The portions are small and OVERPRICED.

And most novices start off with Kalbi, or Korean-style cow short ribs, to those of you who fear that this is a rack of Laborador Retriever. Kalbi is the gateway entree to Korean food land. L.A.-style marinated kalbi is soaked in fruit juices, sugar, garlic, and soy sauce, and has become so popular that everywhere else in the world, and even in Seoul, they call it “L.A. Kalbi.” 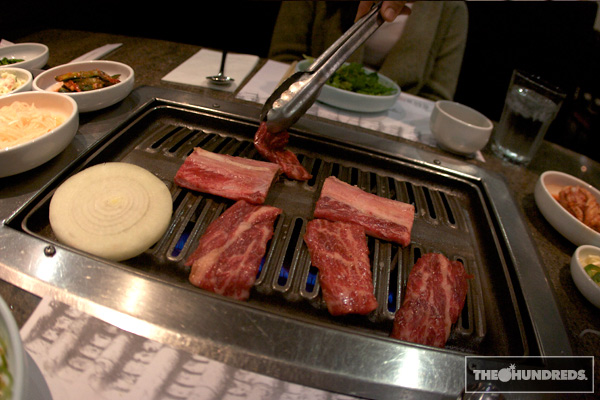 So as you’ve noticed, Korean BBQ is “exotic” because there’s an actual barbecue grill in your table. At the kinda-authentic spots, the friendly, pretty, English-speaking waitresses cook the meat for you. At the straight-up legit spots, the pissed-off Korean ahjumaswith missing teeth dump the raw meat off and you’re on your own, pal. But you know the ribs are alright if they’re bright red. The darker-brown the beef, the longer it’s been sitting in the back of Mrs. Kim’s kitchen.

You should also find a saucer of sesame oil to dip the kalbi in once it’s cooked. Don’t drink it, it’ll be the worst tea you’ve ever had. 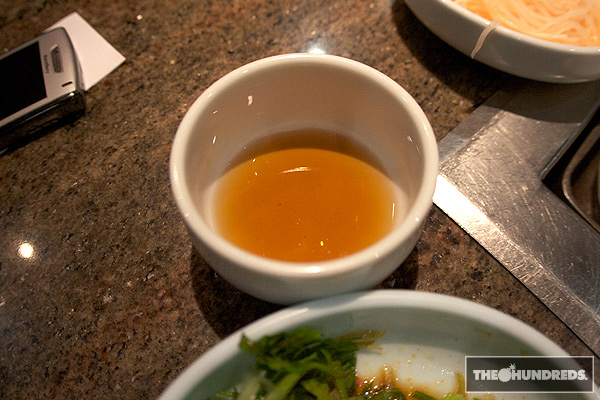 Korean BBQ can be expensive. Here in L.A., one plate of kalbi can hurt you upwards of $30! But I think it’s because of all the freebies that come along with the deal. Sure, at Mexican restaurants you can have all the chips & salsa, and American restaurants do the bread & butter thing (ZZzzzz).

But at Korean restaurants, you have umpteen side-dishes (all you can stomach) called bonchon. You should find spinach, spicy radish, salad, soup, rice, potato salad (I don’t get that one either), fish cakes, bean sprouts, and of course, kimchi, which is the french-fries to kalbi’s hamburger. Kimchi is spicy fermented cabbage, there are all different kinds, and it makes your breath smell like you’ve been tongue-kissing a dead fish. 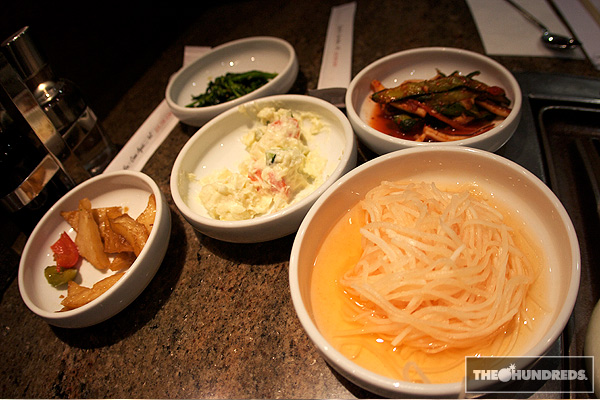 Chosun’s kalbi is eh. There’s much worse out there, but there’s also much, much better. 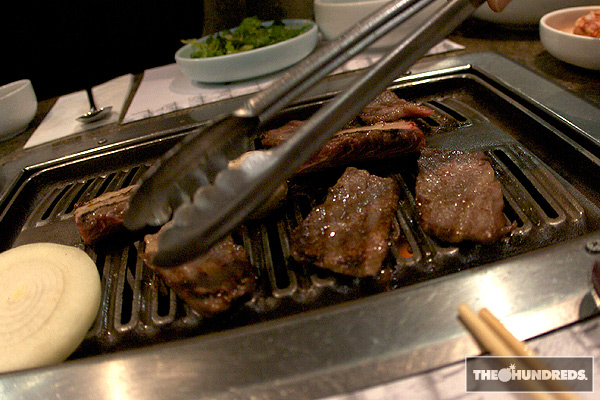 The real reason why we’re here is for the nnaengmyon. Ok, see that word, nnaengmyon? There’s no real way to spell it out in English, so I did my best (Sorry for the 2 “n“s in a row. I know it makes you feel funny inside.)Chosun actually does a great job with their nnaengmyon, which kinda makes up for their WOMP WOMP kalbi.

Nnaengmyon or however-you-say-it is a popular summertime dish because it’s served freezing cold and it’s refreshing. Koreans are big on things that are refreshing. And they revile dust or anything dusty. (And maybe one day I will tell you the myth of Korean electric-fan death). Some restaurants even throw in ice cubes to maintain the chill factor. Chewy buckwheat noodles served in a broth with cold beef cuts, a hard-boiled egg, Asian pears, and cucumbers. 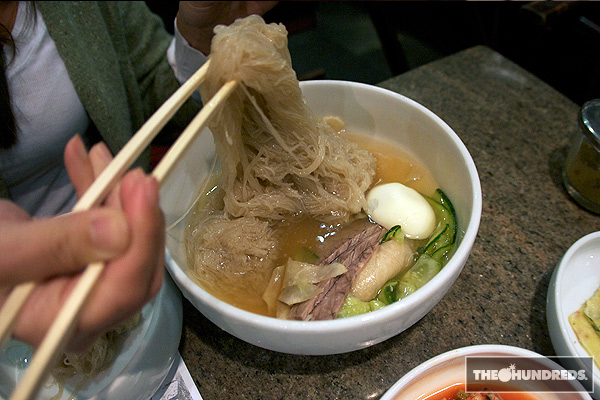 At the end of the table is a canister of hot mustard. Drop a couple spoonfuls into the mix. Also, there’s a bottle of vinegar next to the soy sauce. Throw a couple swigs of that in also. Stir. 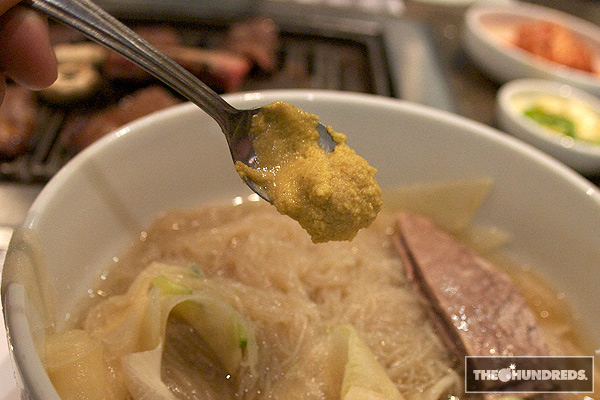 At the end of your meal, you might find a small cup with seeds floating in it. This is NOT the aforementioned sesame oil you balked at earlier. This time, you CAN drink it.

It’s a traditional Korean punch, made of dried persimmons, cinnamon, ginger, sugar, and water. Sounds like the ingredients for the Spice Girls. It’s sweet but has a stinging kick like Drew Barrymore in Charlie’s Angels. If you drink it and accidentally swallow a seed, Korean mythology states that you’ll be mauled by a rabid bear in your sleep. 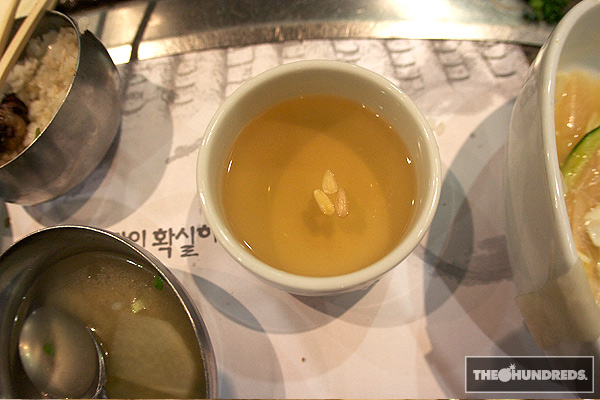 Congratulations. You survived eating dog for the first time, you monster!!!(juuust kidding) Korean BBQ, and now you can tell all your wide-eyed (literally/figuratively) friends about your far-out experience. And that pungent garlic/barbecue-grill smell emanating from your hair, clothes, armpits, wrists, face, mouth? That lasts for 3 days and gets worse every morning. Hope you don’t have any important meetings this week.

p.s. that bear thing was a lie.