I always hear about Five Guys hamburgers. The fast-food chain originated in Virginia and now has over 600 locations across North America. But there are only 2 in Southern California, and the nearest one to us is in Carson, past the Good Year blimp, the only other reason I’ve ever driven to this city being IKEA. I wouldn’t care so much about it if the guys in the office weren’t always gushing about how Five Guys is the best fast-food hamburger in the solar system. And then Zagat goes and ranks it the #1 burger as well, topping In-N-Out, which is pretty much sacrilege in any Californian’s book.

So, okay, fine. Let’s try it. The challenge is worth the 20 minutes drive down the 5 freeway. Scotty iLL at the wheel, driving with his blue head screwed on backwards. 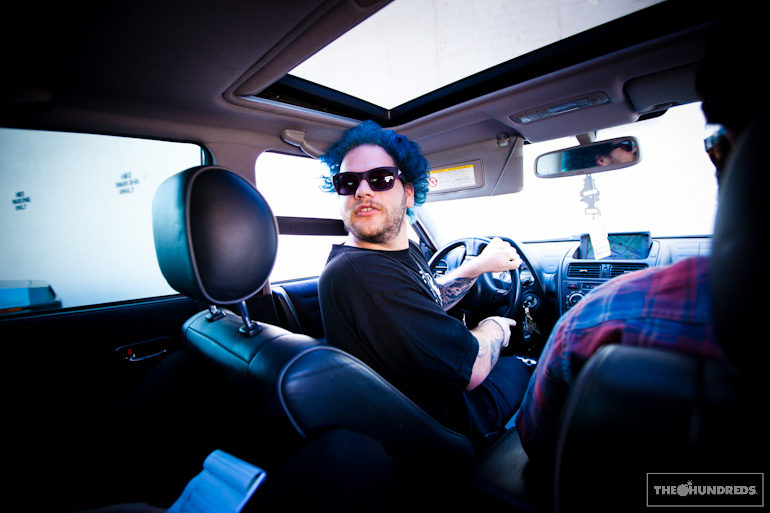 Here we are. Five Guys. Any firetruck within a 5 mile radius was parked out front, and I swear I saw the world’s biggest man sitting inside. He looked like The Blob from X-Men, with Andre the Giant specs. Five Guys has won plenty of awards, several from Men’s Health, which calls the burger joint’s french fries the 4th most unhealthiest food in America, clocking in at a measly 1,500 calories. 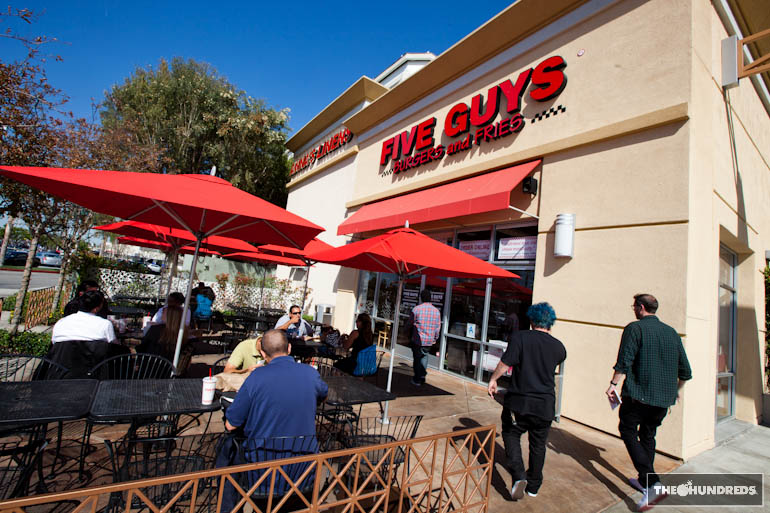 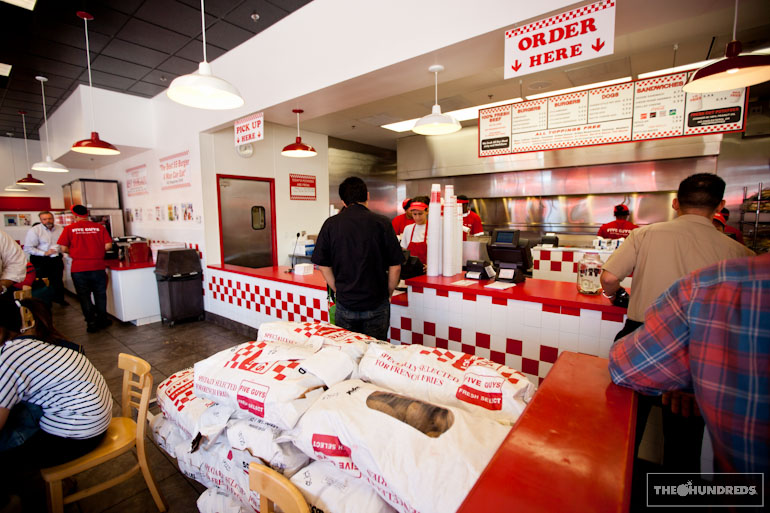 One aspect of the Five Guys experience is the complimentary peanuts you can work on while waiting for your meal. That’s a nice touch. 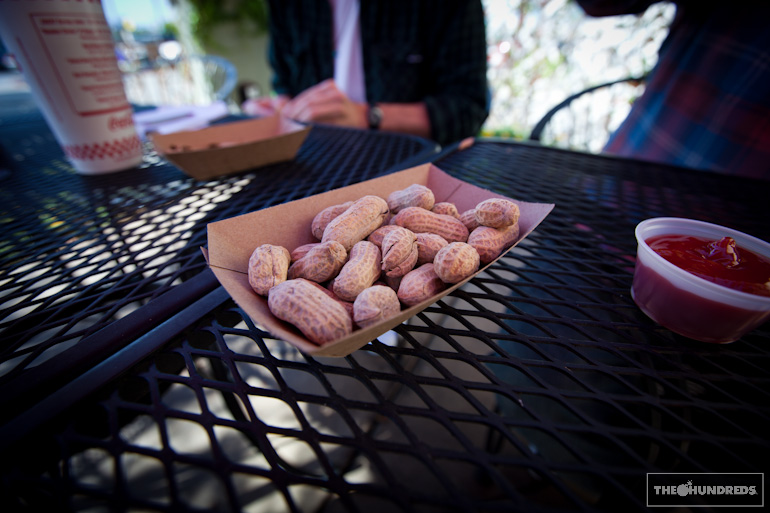 So yeah, the fries. I must say I love the fries, and they alone are worth another visit. They dump the fries in these cups and throw ’em in a paper bag, which they fill up even more with fries and heavy seasoning. So far, so good. 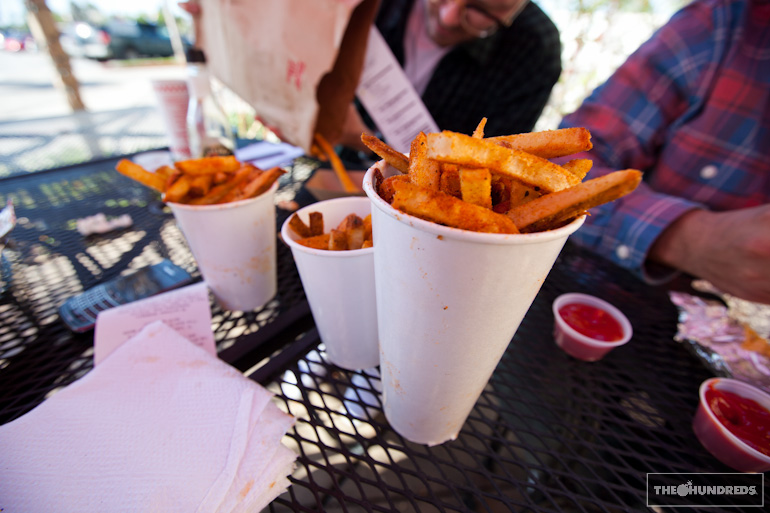 Like In-N-Out and The Hundreds’ staff’s dating pool, Five Guys’ menu is limited in its options. Basically, you can get a hamburger and that’s about the gist of it. You can choose the toppings, like mayo or jalapenos or whatever, but it’s still a hamburger. Comes wrapped in foil. 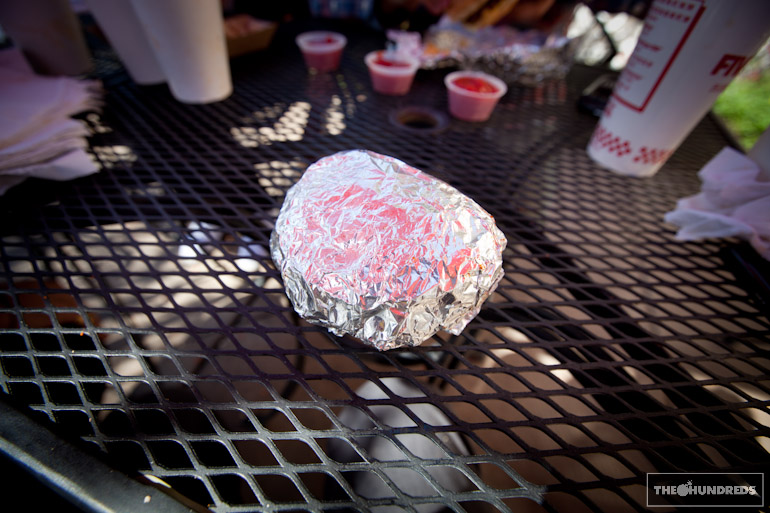 Ta-daaaa!!!!!!! How’s that for a product shot? Looks already half-digested. 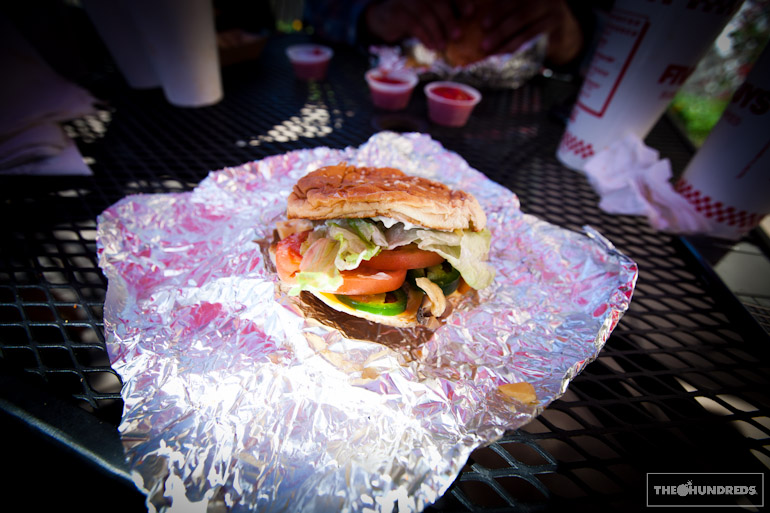 So, the verdict? Whoever says Five Guys is better than In-N-Out is on crack. So Zagat, you’re on that rock. It’s not even fair to compare this burger to In-N-Out, I’d say a better comparison is to Fatburger, and they’d still lose out. Don’t get me wrong, Five Guys was tasty, and I beyond finished my burger, but it was nothing special or unique. Tasted like any hamburger you can make for yourself at a backyard bbq. No special sauce or seemingly secret recipe here. No top-grade beef or signature buns. But In-N-Out and Fatburger offer unique sandwiches, that you can’t easily replicate in the kitchen. So tell me what I’m missing out on here, I don’t really get it. And White Castle, I didn’t forget about you, I still love you.