WHY "BIRDMAN" IS THE BEST SUPERHERO MOVIE OF THE YEAR.

I still haven’t seen Guardians of the Galaxy, but everyone tells me I should. Even when I say, “I’m tired of comic book movies,” they immediately reply, “Dude, that’s why you need to see it! It’s the anti-superhero flick!”  But I’ve watched the trailer and I still see caped crusaders fighting evil in outer space.  Even if it’s tongue-in-cheek like Kick-ass or post-comic ironic like Watchmen, Hollywood’s still fired up another superhero blockbuster to juice with licensed bedsheets and Wal-Mart merch – mutations, aliens, and all.  After Part 8 of the eleventh reboot of Spider-Man, I get the point.

If there were to ever be an anti-comic book movie, though, it’d be Birdman.  Released this weekend to critical fanfare, the dark comedy has all to do with supernatural crimefighting… and nothing to do with it at all. From the title to the protagonist (Michael Keaton’s Riggan Thompson – celebrated for his role as ’90s box office icon, Birdman), to his unexplainable metaphysical talents, there are sizzling special effects montages and car explosions and a giant bird-dragon thing (relax, you can see this all in the preview).  But when superhuman abilities hinge on schizo delusions and an actor’s career ebbs with his hairline, you fast discover that this may well be the beginning of the end for graphic-novel movies.  Or at least the enchantment with them anyways (Keaton’s snark about Robert Downey Jr.’s “Ironman” should drive that point home). 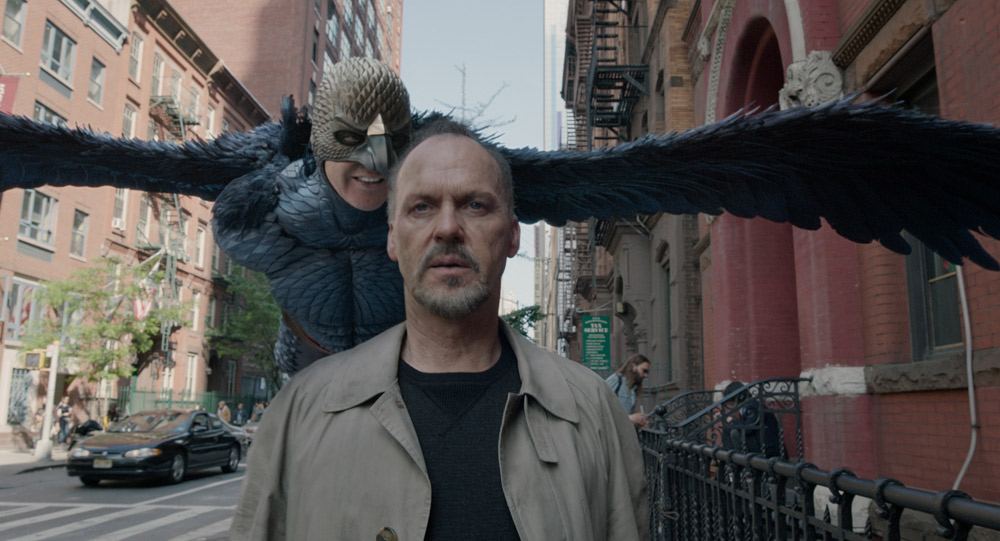 Birdman is beautifully and majestically shot by the Gravity and Children of Men guy (plus directed by the Babel, 21 Grams guy) and that’s worth the price of admission alone.  In one seemingly continuous 2-hour take, the camera veers in and out of the characters’ lives as they pursue a stage adaptation of Raymond Carver’s short story, “What We Talk About when We Talk About Love.”  Do you remember how it felt to watch Speed for the first time?  Or do speed for the first time?  This is like that except without the flying bus or teeth-grinding.  Instead, the entire movie is set inside New York’s St. James Theatre, and from start to finish, the dialogue rolls, the characters spin, and a thrilling ride ensues.  It’s a tour de force for Keaton, who everyone’s welcoming back with nostalgic sentiment and warm applause.  The truth, however, is that Keaton never really went anywhere (He was just in that obscene Robocop remake, remember?)  But we miss the idea of Michael Keaton, the context of Michael Keaton: when superheroes weren’t a genre, but a novelty.  When movies were distorted with eccentric performances by oddball actors like Malkovich, Walken, and Glover (Crispin, not Danny).

The rest of the cast take turns outdoing another.  Zach Galifianakis charges in rare, straight, form, and it’s surprisingly fun.  Emma Stone – co-opting not just Lindsay Lohan’s voice but her life – languishes in syrupy angst.  This may be Keaton’s comeback, but what of Ed Norton, who the world has long forgotten for haunting performances in Primal Fear and American History X and Salma Hayek.  Norton is a plesaure to watch here, in the sort of delivery that reminds every actor why they act.  There’s a scene early on where he and Keaton are wrestling over lines, and the tug-o-war is so fast paced, so fantastically written and brilliantly played, that you can’t help but smile because you’re thoroughly bewitched and entertained. It’s magic. 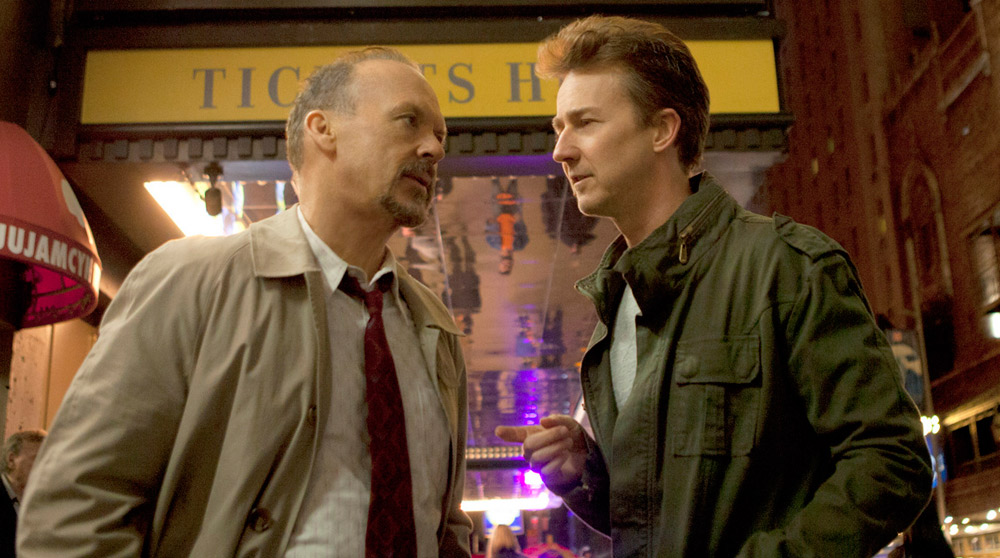 Of course, Birdman has its faults.  For one, it doesn’t know how to end, like a run-on sentence.  Like a party-crasher who makes a splashy entrance, hypnotizes the company, then quietly exits while everyone’s drunk.  The film is also maybe too self-aware, too industry.  Birdman resonated with the Arclight Hollywood audience I sat amongst Saturday night, but what about the dollar theater crowd in Galveston, Texas?  Will they find as much amusement in working-actor jokes, stage/screen politics, and Riggan Thompson’s barside tirade against critics?

Whatever, I’m reaching.  Birdman is good, if not great.  It’s the best superhero movie, because it’s the most honest.  Because it grounds the masked vigilante to earth with the rest of us.  To be drubbed by social media, not Kryptonite.  To weather age and impending irrelevance, not cyborgs and meteors.

Carver’s What We Talk About When We Talk About Love follows four friends around a bottle of gin as they attempt to identify and define Love.  But the more they talk about it, the more it evades their comprehension, and the deeper they descend into hollow confusion.  Maybe the more we romanticize these comic book films, the harder it is to reconcile our own mundane lives.  Perhaps Riggan Thompson is all of us, walking the tightrope between fact and fiction. Or maybe the more I try to analyze this movie, the less I get it.  Ahhh, I see what you did there. 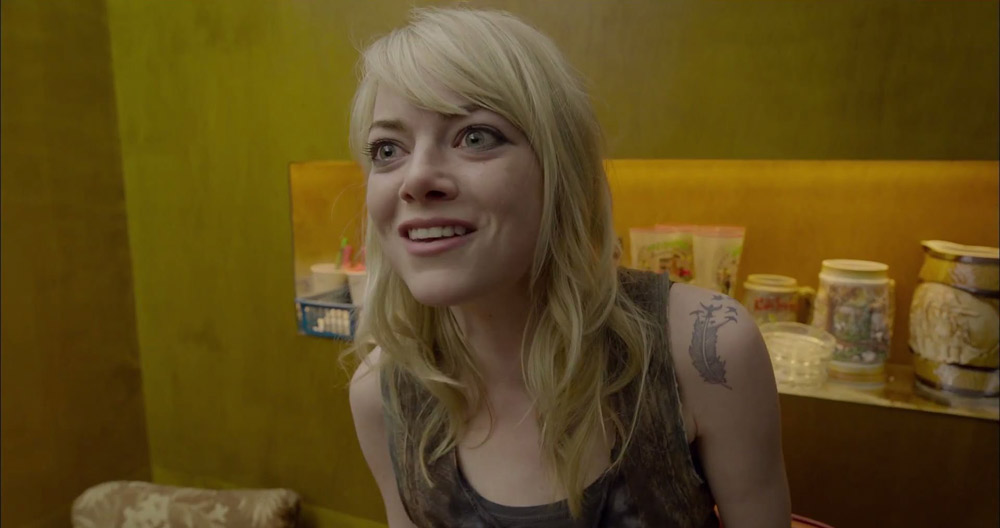