It’s 3am in Berlin and the night wants desperately to break into day. We’re so far up north in Europe that it only stays true dark for a few hours really. The sun is always fastened to the horizon.

Ben, Scotty iLL, B.Mo, and I have just left our last party. The cabbie drops us off at an all-hours Turkish cafe and we’re seated at a sidewalk table, between dueling trios of weathered Turkish men engaged in smoldering conversation. The waiter starts doling out the dishes: piping hot kabob plates with creamy yogurt drinks and mixed grilled vegetables. Beef and lamb marinated in grease and spices and more grease and even more spices. Turkish food is gooood. 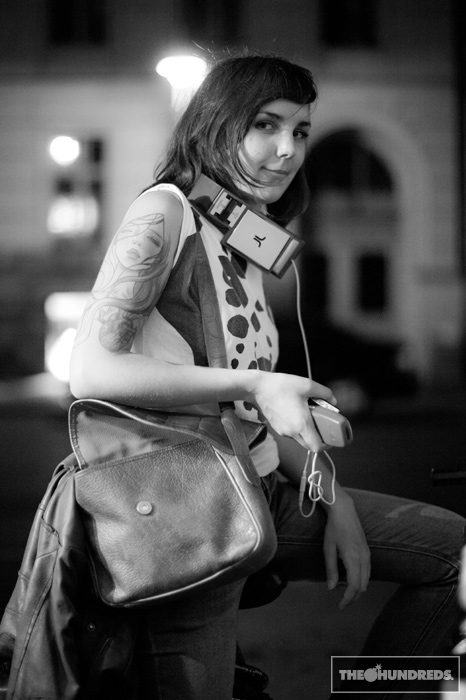 A girl pedals up on a creaky bicycle. She’s sweet and cherubic, plucked right off of the Sistine’s walls. Her hair is unkempt and mousey, probably the last thing on her mind. The headphones are out of place, maybe a bit too designed for her laissez-faire life, but fittingly, she’s a glowing WESC advertisement. Without looking up from her phone, or getting off her bike, she mutters rapid-fire German. And then she asks again. In German.

“Oh. Do you know where Bar So-and-So is?” Now she speaks fluent English, although infused with an unmistakable Australian accent. Her name is Ava, she tells us, she grew up Aussie but moved to Germany 8 years ago for no real reason. (I still find it so cool, and subsequently embarrassing, that most people outside of the States are proficient in multiple languages). Ava has an Audrey Kawasaki piece tattooed on her arm — I wanna know about it. She’s impressed that I’m familiar with Audrey Kawasaki’s art, and then I realize how spoiled I am to live in L.A. and be exposed to great artists all the time.

Ava is a goldsmith. She is trying to get her jewelry off the ground, but running into a wall when it comes to slick marketing efforts. She just wants to create! She shows off some of her wares. They’re really good.

The bar she’s looking for turns out to be right around the corner, and it also turns out to be a gay bar. She invites us along, but we decline. She tries one more time, gives up reluctantly, and then Ava rides off.

Berlin, Germany is actually a strong bohemian city. Supposedly, young artists can get by sufficiently here, in the wake of the political and socioeconomic crises that their parents endured. As I’ve reiterated plenty times before, the greatest creativity comes from struggle, and Ava is proof of that.